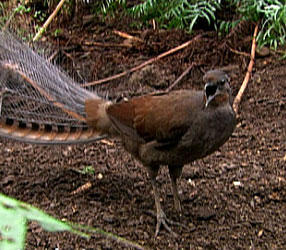 Which Creatures Have “Game?”

Geladas, close cousins of baboons, will show off their passion-flushed pectorals, and lizards will do push-ups for their chance to “score.”

But sometimes finding a mate is not as simple as getting in tip-top shape. When it comes to mating, critters go to great lengths in order to attract and keep their partners.

In fact, there are almost as many ways to find a mate and reproduce as there are numbers of species, including chimps that cook up tasty jungle feasts of papaya for their chimp ladies and squid which mate ALL day long.

Even snails engage in the mating game, and they are hermaphrodites, which means they possess male and female reproductive organs. When it’s time to mate, snails activate a “love dart,” and shoot sperm at each other, which is full of mucus and hormones.

Now, it’s your turn to play a hand in the mating game: Try decoding the language of animal love and figuring out which species goes with which mating ritual.

1. It takes two to tango: These inhabitants of the sea are best known for their “mating dance.” Couples swim together and hold tails — matching each other’s movements. The male curls his tail around her torso, and they tango. She, in a twist-and-turn maneuver, manages to transfer the eggs to his pouch, by the way, where they are fertilized and carried to term.

2. Breakfast in bed: Even jungle critters have wooing tricks to get their lady friends “in the mood.” When a male is ready to mate, he will capture an insect in his web and wrap it in silk. When he spots a female he wishes to mate with, he offers her this feast. While the female is distracted by her five-star meal, the male will mount her and begin mating.

3. Kiss-kiss-kiss: The only species besides humans to kiss. Before actually mating, male and female birds will lock beaks and gently flick their tongues together. The males will then regurgitate the food for their mates as a sign of affection. Different strokes for different flocks.

4. Not Scents-ible: These macho mammals attract mates by marking territory, beginning with urinating and defecating at the same time. Then, they do a propeller-like twist to spread the mess in every direction. Once the “romantic act” attracts a lover, the pair begin foreplay and splash around in the water to get in the mood before they get down to business.

5. The Rhapsody Of The Everyday: This male attracts a mate with its tail feathers. Once noticed, he will treat his intended to a repertoire of sounds that would make a symphony orchestra pale by comparison. These expert mimics reproduce a huge range of sounds from their environment. In this day in age, that includes not only the sound of nature, but technology and urban noises, such as mobile phones, pulsing car alarms and even clicking cameras.