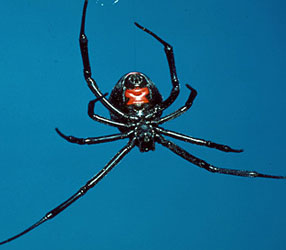 Is this a love story, or a ghoulish bedtime tale? — A male praying mantis approaches a female. Excited, he flaps his wings and sways his abdomen. Once he is on her back, he begins to mate. Then, she bites off his head.

The praying mantis, black widow spider, and jumping spider are among a number of species that devour their mates. Sexual cannibalism is also found in other invertebrates, including a relative of the praying mantis, the Chinese mantis, and scorpions. Cannibalism has also been noted among South American green anacondas — the largest snakes in the world.

Female black widows are perhaps the most notorious “mate munchers.” Males have to place themselves between the female’s fangs to get in the right position for mating, and are sometimes devoured upon completing their assignment. Clearly this eight-legged femme fatale has earned the name “black widow.” 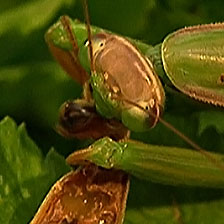 Despite the “bad ends” at which males find themselves, it doesn’t seem to deter them from trying to reproduce. To the contrary, the continuation of the species is proof positive that death by sex is a successful evolutionary strategy. By surrendering themselves to their mates, males achieve the goal of mating — passing on their genes.

Male redback spiders, for example, are equipped to pass on their genes even in the throes of death because they have two sexual organs that allow them to survive cannibalism long enough to mate twice.

For bachelor biting midges, cannibalism also makes evolutionary sense. The National Wildlife Federation reported that during mating a male’s genitals break off, while he is still clasped onto the female midge. While the bachelor may not live after sex, he blocks future matings and knows his sperm will make it.

But a closer look at sexual cannibalism reveals that not all animals will succumb to feisty females, and some go to great lengths not to be eaten. Male golden orb spiders endeavor to avoid becoming dinner by attempting to mate with females as they are eating something else. But, they still may end up as dessert.

Fear not guys — it’s not do or die for all males in the animal kingdom. Some animals just have to practice their push-ups.