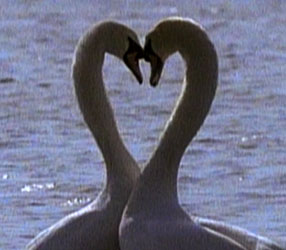 Of the 4,000 or so species of mammals, only a handful of animals have ever been thought to mate for life. This short list of animals includes among others: gibbon apes, wolves, coyotes, barn owls, bald eagles, gorillas and barn swallows.

But as it turns out there are some cracks in these monogamous images — and whether these creatures’ faithful reputations hold up or not comes down to how one defines “mate for life.”

Animals may be socially monogamous, staying together in pairs for anywhere from a lifetime to just a season, but that doesn’t mean that they don’t have cheating hearts. And, according to Kevin McGraw, an Arizona State University life sciences professor who specializes in mating systems and rituals, only 3 to 10 percent of mammals are even socially monogamous.

Wolf alpha pairs are usually monogamous with each other, but alpha males have been known to stray with other pack members, especially if they are closely related. Among red foxes, long considered extremely loyal, mate switching has also been shown. DNA fingerprinting in one study proved that 80 percent of red fox cubs were the product of extracurricular activity by females.

The reason why some animals live in exclusive pairs and still engage in flings on the side seems to be related to parental care. Foxes, for instance — like barn swallows and more than 90 percent of all bird species — form lasting pair bonds with their mates. These bonds allow both parents to care for the young — a practical way to deal with the demands of child rearing. 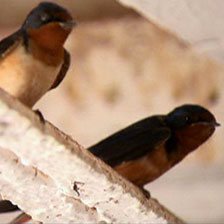 More than 90 percent of bird species form lasting pair bonds with their mates.

Sexual monogamy, where animals have only one mate forever, is rare because evolution favors promiscuity. Some females of a species may choose to live with a mate who is a good provider, but they may keep looking for other males, who have “better” genes that will produce better offspring. Also, in the animal kingdom it may pay to sleep around, because relying on a single mate is risky business.

“If one’s mate were to be harmed, to disappear, or to lose their life, an animal’s reproductive success would suffer permanently were it not to find an alternate mate,” said McGraw. “By increasing their number of mates, animals should generally produce more and better young.”

Perhaps, monogamy’s only true success story lives in the intestines of fish — where a flatworm physically attaches itself to a mate for life, according to an article in The New York Times.

“There may be other animals that are truly monogamous, but the data is not out there. It’s a matter of cautious science,” McGraw explained.

While social monogamy is very rarely accompanied by sexual monogamy, there are plenty of animals in which males and females share mutual affection and exhibit a certain amount of fidelity.

While it may not be “till death do us part” in the strictest sense, faithfulness has its advantages and it will have a place in the animal kingdom for a long time to come.