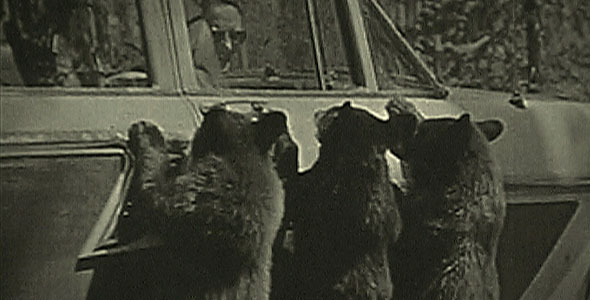 It was a sight that became an icon of American tourism: A shaggy brown grizzly bear ambling down a roadside in Wyoming’s Yellowstone National Park, surrounded by gawking adults and wide-eyed children leaning out car windows. Indeed, as NATURE’s The Good, the Bad, and the Grizzly shows, “bear jams” had become a significant problem on Yellowstone’s roads by the 1960s — even as the magnificent mammals edged close to local extinction.

Luckily, the Endangered Species Act helped save Yellowstone’s grizzly bears from that sad fate. But that doesn’t mean the great bears are out of the woods. Yellowstone’s grizzlies continue to be a source of fascination and controversy, and despite their growing numbers the bear’s future is still in doubt.

Not Your Average Bear

When President Ulysses S. Grant created Yellowstone National Park in 1872, the area was renowned for its beautiful scenery and spectacular geysers. But the park’s grizzly bears soon became one of its best-known attractions. By the late 1800s, dozens of nearly tame bears were gathering at garbage piles near park hotels to gorge on leftovers. Often, humans stood by and watched the spectacle. In the early 1900s, motorists began reporting bears ambling along park roads begging for handouts. The bold carnivores would sometimes approach stopped cars, pushing their snouts into windows.

Not surprisingly, such close encounters occasionally turned dangerous. Between 1931 and 1959, each year an average of 48 park visitors were injured (sometimes fatally) by bears. During this period, plenty of bears were killed in motor collisions. As the bear and human injury toll mounted, park officials began to consider ways of returning bears to their wild ways. In 1970, they took action, enacting tough new rules against feeding bears, closing garbage dumps, and installing bear-proof trash cans. It worked. Soon, bear-caused injuries dropped to less than one a year.

While people were safer, the bears were not. Hunting and habitat loss had driven local bear numbers to record lows. In 1975, federal officials declared Yellowstone’s grizzlies “threatened,” estimating that about 200 to 300 bears remained in the park and on surrounding lands. Soon, biologists were working hard on plans for the bear’s recovery.

Today, that effort has paid off. Biologists believe that 500 to 600 bears now live in the Yellowstone region, and populations continue to grow. As a result, federal biologists, park officials, and others are now considering the removal of the bear from the endangered species list — an idea that has prompted plenty of controversy. (See Delisting the Grizzly.)

Some conservationists say that the grizzly bear’s future is still uncertain. They argue that in order to survive, bears need plenty of food and room to roam — two things that could be in increasingly short supply in the future.

Male grizzlies need territories that cover 813 to 2075 square miles. While female bears’ home range varies from 309 to 537 square miles. But a building boom is beginning to enclose the lands around Yellowstone, as newcomers build homes and businesses, and mining firms are increasingly targeting the area for exploration. All this development increases the chances that bears will come into conflict with people or be killed in collisions with cars and trucks. Wildlife biologists can often solve these problems by moving bears to wilder areas. But sometimes these endeavors are not successful and problem bears are euthanized.

Bear biologists are also concerned about the grizzly food supply. In particular, they point to possible problems with four key food sources: the seeds produced by whitebark pine trees; Yellowstone cutthroat trout, which live in the region’s cold waters; army cutworm moths, which the bears dig out of high-altitude soils; and bison carcasses.

In recent years, deadly bark beetles and a disease known as blister rust have been decimating whitebark pines. While not all bears feast on this high-fat snack, some rely on them to provide the energy needed to get through the winter.

The cutthroat trout, which the bears snatch from the waters where these fish spawn, are threatened by the lake trout, a non-native predator, as well as by whirling disease, a neurological illness. The disease has already killed off cutthroat living in one major tributary of Yellowstone Lake.

The cutworm moths cover vast distances during their annual migrations between Yellowstone’s rocky peaks and the fertile fields of the Great Plains. But their numbers may be reduced by pesticide spraying in agricultural areas.

Grizzlies don’t typically kill bison, but they will feed on their carcasses. Some conservationists worry that Yellowstone’s bison population could be reduced by policies that allow some of the grazers to be captured and killed if they leave the park. Bison herds have also been affected by brucellosis, a devastating disease that has forced wildlife managers to kill infected animals.

Supporters of delisting say that these challenges can be overcome and even if the grizzly is taken off the list, state governments have promised to protect the bears and their habitat. They also note that, through more than a century of conflict and controversy, the bears have shown a remarkable and inspiring ability to adapt to changing circumstances.

SHARE
Features
2009 Update
Interview: Filmmaker Shane Moore
What to Do if You Encounter a Bear
About
The Delisted Yellowstone Grizzly Update from Natural Resources Defense Council
Additional Web and Print Resources
Delisting the Grizzly
You May Also Like
Dolphins: Spy in the Pod | Part 2
Equus "Story of the Horse" | Episode 1: Origins
Voyage of the Lonely Turtle
Natural Born Rebels | Episode 1| Hunger Wars
Living with Snow Leopards–Tashi’s Story: A NATURE Short Film
Equus "Story of the Horse" | Episode 2: Chasing the Wind