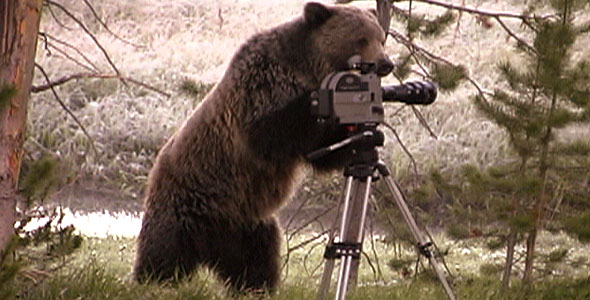 Wildlife filmmaker Shane Moore has been documenting the natural world for nearly three decades, producing distinctive and detailed studies of complex ecological problems around the world. In NATURE’s The Good, the Bad, and the Grizzly, Moore turns his lens on the mighty grizzly bears that inhabit Yellowstone National Park and surrounding lands. Once threatened with extinction, Yellowstone’s grizzlies have now rebounded — a success that has brought its own set of problems, from conflicts with people to the need for adequate room to roam. Moore recently discussed these and other grizzly bear issues from his home in Jackson Hole, Wyoming:

You’ve filmed grizzly bears a great deal in the past. Did anything surprise you while making this film?

I was surprised by the level of conflict with grizzlies that people in the area are dealing with on a regular basis. I knew there were problems, but I didn’t think they were so widespread. But the bears are everywhere now. [Government biologists] recently had to capture six bears involved in conflict situations in a single day — that’s some kind of a record, and the problem seems to be growing.

What happens to these “problem” bears?

Well, female bears are very valued, so they get “three strikes.” The biologists will try to move them out of conflict situations three times. But males typically get two strikes, and just one if they are doing something considered very dangerous to humans. If it is a serious problem, those bears will be euthanized.

How have these conflicts influenced local views on the proposal to delist the grizzly as endangered?

A lot of locals are looking at this trend and saying: “These bears are endangered? Give me a break.” But if you look at the issue from the other side and consider the potential problems with the future food supply for the bears, the picture looks pretty grim. So there are strong views on both sides.

What would you do?

I want to see bears do well, but I’m not certain about how to do that. If you don’t delist them, the local frustration level is going to reach the breaking point. There is going to be a lot of “shooting, shoveling, and shutting up” going on [illegally killing bears and burying them]. So it’s a really tough call. I don’t think delisting would be the end of the world, since the states will continue to work together, and they have put a lot of thought into protection plans. But there could be problems [such as] greater development, logging, and limited hunting. That is hot button issue for a lot of people.

Outside of the policy issues, what captured your attention in making this film?

Well, the moth story still blows me away. I hadn’t seen any footage of [the bears foraging on mountain peaks for the army cutworm moths]. I’m still astounded at how the bears aggregate on these mountain peaks, sometimes coming from about a thousand miles away to feed on these insects.

How did you find those places?

It wasn’t easy. These sites are top secret, nobody divulges them for good reason — you don’t want lots of people there disrupting the bears. So we had to do a lot of our own exploration. We’d climb up with heavy backpacks loaded with all of our equipment, and start looking. Soon, we figured out what makes a moth site work. But it was hard to get the search image right; you are looking for a bear on these big, virtually lifeless rocky slopes. They hole up during the day, and then start coming out in the evening. And when they do… Whew! We saw 15 bears on a single peak. It was hard to capture that on film.

Could you get close?

About a quarter of a mile away. And we’d always stay downwind. But I think it’s worth backing off and being happy with yourself for not causing a big disturbance for the bears. It feels like a sanctuary up there.

Any other surprises besides the moths?

The elk hunting story continues to fascinate me — that the carcasses hunters leave behind can be such a key source of food was really interesting.

Anything you weren’t able to capture the way you wanted to?

Well, I wanted to film the bears eating the four key foods, and we did pretty well. But I wanted to do a little better with the white bark pine seed story. It is so challenging to work in those thick forests; they are very difficult places to work. In the backcountry the biggest challenge is not to frighten the bears.

2009 Update
What to Do if You Encounter a Bear
About
The Delisted Yellowstone Grizzly Update from Natural Resources Defense Council
Additional Web and Print Resources
Delisting the Grizzly
Grizzly Past, Uncertain Future