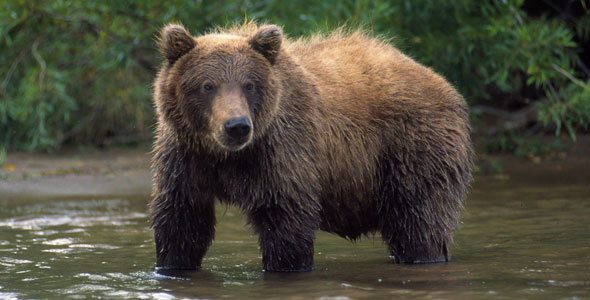 As the grizzly bears of Yellowstone settle into their winter hibernation, the debate concerning their future will remain decidedly active. A formal proposal to remove the grizzlies from the federal government’s list of endangered species is expected in 2005. But the proposition is an extremely complicated one, fraught with controversy.

When Lewis and Clark explored the West in the early 19th century, an estimated 50,000 to 100,000 grizzlies roamed the land between the Pacific Ocean and the Great Plains. Awed by the formidable grizzly, Lewis wrote, “Captain Clark & Drewyer killed the largest brown bear this evening which we have yet seen. It was a most tremendous looking animal, and extremely hard to kill.”

Lewis’ words underscore what was and remains the primary cause of grizzly bear decimation — human and bear interaction. In 1975, it was thought that only 200 to 300 grizzlies populated the Yellowstone area, prompting the Fish and Wildlife service to list them as “threatened” under the Endangered Species Act (ESA). Nine thousand square miles of land in parts of Wyoming, Idaho, and Montana were established as a recovery zone. As a listed species, the grizzlies benefit from ESA defenses such as the restriction of their transport and sale, and protection from federal or business activities that could adversely affect them. Federal funds are also given to wildlife agencies to study and recover the bears

Yellowstone National Park. Now, roughly 30 years later, some people say the bears no longer need ESA protection because they’ve met required population, distribution, and reproduction targets. “There are about 600 bears in Yellowstone now, and their population is increasing about four percent each year,” says Chris Servheen, grizzly bear recovery coordinator for the Fish and Wildlife Service.

Steps towards delisting the grizzly began years ago, but two recently released documents mark the final steps toward an official proposal. The first document is the “Conservation Strategy,” an agreement released in 2003 by federal and state agencies on how to monitor and manage the grizzly population once it’s delisted. The second is the “Draft Environmental Impact Statement ” (DEIS), released in 2004 by the Forest Service. It addresses how the six national forests in the Greater Yellowstone Area will manage grizzly habitat upon delisting.

These documents have been met with fierce resistance from delisting opponents who say the plans fall short of fully protecting the bears. Louisa Willcox, Director of the Natural Resources Defense Council’s (NRDC’s) wild bears project points to one example: “One third of the Yellowstone grizzlies are living outside the recovery zone. If you want to keep these bears alive, you need to extend habitat.” Groups such as the NRDC and the Sierra Club say the DEIS calls for managing the bears on an “island” when it should be protecting all occupied habitat and connecting it to other ecosystems where the bears can access seasonal foods, breed, and escape natural disasters.

Doug Honnold, an attorney for EarthJustice, says the “Conservation Strategy” also relies too heavily on state management, leaving the bears susceptible to ranching and hunting interests. Delisting opponents are also concerned with such factors as vulnerable food sources, housing development, and the financial interests of logging, mining, and oil businesses.

Defenders of delisting, however, say that the “Conservation Strategy”, years in the making, will uphold the management and protection of the grizzlies. “It’s taken 24 years to even consider recovery and delisting because we’re too meticulous,” says the Fish and Wildlife Service’s Servheen. “In the case that the bear population suddenly starts dropping, we can quickly place them back under the ESA with an emergency measure.”

“The ESA requires Fish and Wildlife to recover animals and produce a plan to sustain that, which they’ve done for the grizzlies,” adds Charles Schwartz, head of the Interagency Grizzly Bear Study Team. “What’s not on the ESA, however, is a whole series of ‘what ifs.'”

But some claim these “what ifs” are becoming a bit too real, citing such cases as the recent lease of 175,000 acres of Wyoming’s Bridger-Teton National Forest for oil and gas development. Much of this land is roadless and prized for its wildlife. In September 2004, public outcry and pressure from Wyoming Governor Dave Freudenthal temporarily prevented the U.S. Forest Service and the Bureau of Land Management from the leasing the land until public concerns are further evaluated.

Amidst these intense debates, there are points on which several parties agree. The first is the need for the Yellowstone grizzlies to be connected to other grizzly ecosystems. Many favor a plan to open a corridor through grizzly territories in Yellowstone, other parts of northwestern United States, and Canada. For the linkage to work, the grizzlies would have to return to one of their ancestral homelands — the Bitterroot ecosystem of central Idaho and Western Montana, from where they were driven out of in the early 1900s. While a proposal to reintroduce grizzlies there was nixed by the Bush administration in 2001, it is still a plan that many hope to implement.

Another critical element, upon which many agree, is the need for funding. An estimated $3.5 million will be needed each year to fund research, public education, monitoring, and other grizzly-related items. Current funding is roughly $2 million. If the bears are delisted, federal funds, including those provided in ESA Section 6, will be lost. “That’s the 64 million dollar question — how are we going to pay for this?” says Willcox. One idea is to establish a conservation endowment trust to be funded by Congress, but a definitive strategy remains unclear.

Funding or not, the drive to delist forges ahead. Other species have been delisted from the Endangered Species Act without a fight, but not the Yellowstone grizzlies. They’re the most studied grizzly population in the world. And aside from a population in Northwest Montana, they’re the last grizzly stronghold in the United States. They now have the dubious distinction of being unwitting players in a struggle between science, politics, and business that, at its core, revolves around territory.

2009 Update
Interview: Filmmaker Shane Moore
What to Do if You Encounter a Bear
About
The Delisted Yellowstone Grizzly Update from Natural Resources Defense Council
Additional Web and Print Resources
Grizzly Past, Uncertain Future