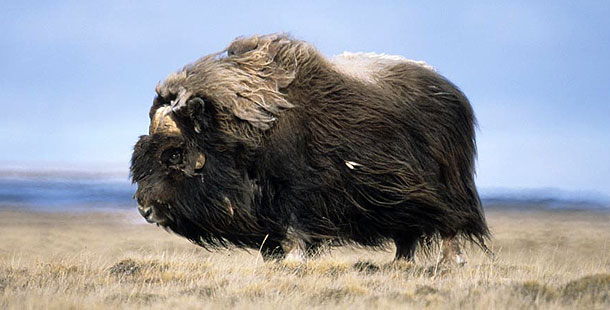 The musk ox herd in White Falcon, White Wolf gets a lucky break when the pack of Arctic wolves chooses to go after other prey that’s easier to catch. But these hairy powerhouses face a great number of dangers in their Arctic home.

Contrary to their name and appearance, musk ox have no true musk glands and are not oxen.  They are more closely related to sheep and goats than the buffalo they more closely resemble. But it’s hard to tell with all that hair. Perfectly adapted to their Arctic habitat, musk ox have a winter coat that is eight times warmer than sheep’s wool. A layer of fine underwool is paired with their long, continuously growing skirt of guard hairs, which can reach the ground in older individuals. The only part of their body that is not covered in warm wool is a small strip of flesh between their nostrils and their lips. Other Arctic adaptations include short legs and a high body-fat content. These traits clearly work well for them, as musk ox have remained relatively unchanged and have successfully inhabited Arctic regions for over 40,000 years. And unlike their former neighbors, the wooly mammoths, musk oxen were able to survive the last ice age without being hunted to extinction by prehistoric peoples. In fact, musk oxen are the only large terrestrial mammal that has inhabited the Arctic continuously for the last 10,000 years.

But the traits that help the musk ox stay warm and survive the Arctic winter come with a price—the risk of overheating. Because of their thick fur, high fat content, and stocky legs, musk ox can only run short distances. Their only sweat glands are located on their back hooves. So, to protect themselves when faced with attacks by polar bears or wolves, musk ox form a circle around their young, with their rumps pointed in and their large horns facing the enemy. Musk ox have been known to maul–and even kill–wolves with their horns.

Wolves aren’t the only threat to young musk ox. For the first year of their life, offspring are dependant on their mothers for both food and warmth. Having not yet grown their full coats or put on the extra weight adults have to keep them warm, young musk ox hide beneath their mothers’ skirts to escape the elements.  Starvation is another winter threat. Musk ox eat almost any vegetation during the summer, including grasses, leafy plants, mosses, herbs, and shrubs. During the winter, when a blanket of snow covers everything, musk ox must dig to uncover frozen tundra grasses using their hooves and horns. At the onset of winter, herds migrate to higher altitudes where the roaring winds help to uncover buried food. The musk ox have no choice but to eat what they can find: Arctic willows, dwarf birch, lichen, roots, and any other vegetation that might lie beneath the icy landscape. This winter diet has very little nutritional value, so it is important for every member of the herd, especially younger individuals, to take advantage of the abundant vegetation during the summer.

Winters are long and dark, and the herd huddles together for warmth. The movement of the herd also helps loosen surface snow, making food more easily accessible, especially for young. If the calves can make it through their first winter, they have a good chance of living a long life. Some individuals live more than 20 years. Others may not be so lucky. Climate change poses a major threat to musk ox, as warming winters and unstable weather patterns bring on bouts of freezing rain that leave impenetrable layers of ice over the winter vegetation musk ox depend on. Unable to access food, many musk ox slowly starve to death. The Large Animal Research Station in Fairbanks, Alaska is hoping their conservation efforts, combined with research from the field, can make a difference in the continued survival of this amazing animal.

To learn more about the musk ox, visit our list of additional web and print resources.

Sharkland
The Beauty of Ugly
Dogs in the Land of Lions
The Good, the Bad, and the Grizzly
Hippos: Africa's River Giants
Natural Born Rebels | Episode 1| Hunger Wars