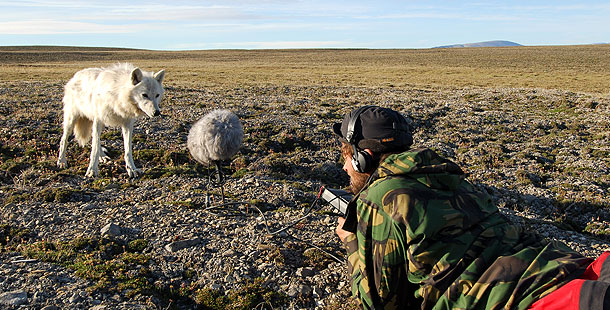 In the world of wildlife filmmaking, there are occasions when we all get together and talk about future projects. One of these events happens at Jackson Hole in Wyoming. Back in 2005 I had my chance ‘pitch’ with boss man Fred Kaufman, Executive Producer of NATURE. Given the competition, the number of people and ideas that he has to listen to, these pitches are vital.  I ordered a salad. We sat on a bar stool. I banged on about the white wolves, and the largest of the falcons, the gyrs, these two stunning white characters on a dramatic stage.   He just kept quiet and ate, glancing up occasionally. As he didn’t interrupt me with a question, I continued to pitch, getting more and more excited as I painted the picture of the island, the noises, the elements, and how we would bring to NATURE’s screen a real jewel of a film. As I ended the pitch I picked up a leaf of salad and crunched it and heard him say the words… ‘Fergus, I like it.’ Believe me, that’s rare in this business! So, we were on! Hey, Fred!

Back in 2005, I was researching logistical issues for working on Ellesmere in Northern Canada and kept on coming across the name of a remarkable solo arctic explorer, called Jim McNeill. He was, quite surprisingly, another Brit — and soon after we met for the first time — I realized that this man and his outfit ICE WARRIOR were going to be intrinsic to working in the remote corners of Ellesmere Island. Jim had done it all before — alone. He had encountered wolves in various parts, and had wonderful photographs to whet my appetite even more. He knew when and how the ice would behave, which vehicles could move with what, how aircraft could land and where — it was all straightforward to him. He was soon a crucial part of my team, and together we started planning.

We did a fantastic arctic survival course with him near Reading and he was even able to provide a blizzard for us. Elements of the course included navigation, orientation and first aid. Though I was a soldier once, as was Jim, his expertise was second to none. Jim was able to highlight all the areas that would be a health and safety concern. His emergency plan would be vital to ensure that in the event of an accident on Ellesmere, a victim would get out alive…

This was a two-phase plan. Phase One, the recce, involved Jim McNeill and Assistant Producer, Harry Hoskyns-Abrahall. They would identify the wolf activity area before cameraman Mark Smith was flown out to join them for Phase Two.

The following are entries from the field diary of professional explorer Jim McNeill, written during the expedition on Ellesmere Island in preparation for the filming of White Falcon, White Wolf.