BOB ABERNETHY: Now our "Cover Story": re-creating the experience of slavery. At St. Paul Community Baptist Church in Brooklyn, New York, Reverend Johnny Ray Youngblood has developed a powerful program of music, dance and theater. The pageant is called the "Ma'afa Suite". Ma'afa means 'catastrophe' in Swahili. All the performers are members of the congregation. Ma'afa is now being commemorated in more than 50 other black churches. The objective is to help African-Americans heal slavery's hidden wounds. Our reporter is Samuel Freedman. 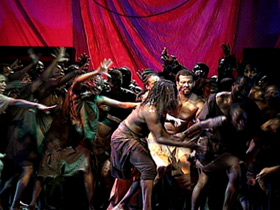 Reverend JOHNNY RAY YOUNGBLOOD (St. Paul Community Baptist Church): In my growing up, slavery was not talked about at all. Any mentioning of the slaves took place, of course, in the two paragraphs in the history book, first of all, in terms of school. And at home, if slaves were ever mentioned, slaves were always other people, people we did not know, people who basically were dead and gone. There were no designated periods of time set apart where we could mourn. And I felt that one way to go about it creatively was to deal with our pain in order to find the strength in memory.

SAMUEL FREEDMAN: For two weeks every September, St. Paul Community Baptist Church in Brooklyn, New York, commemorates the Ma'afa in song, dance, film, lectures, and poetry. Ma'afa, a term which means catastrophe in Kiswahili, is increasingly being applied to the African-American slave experience.

Ms. MONICA WALKER (Coordinator, Ma'afa Commemoration): There has been an almost unexplainable level of shame attached to this experience. When we began to talk about this level of degradation to our children, there was, I think, a certain kind of fear of what might this engender in the young to know that parents and grandparents and the ancestors went through this.

FREEDMAN: The Ma'afa suite, the centerpiece of St. Paul's remembrance, takes its audience on a harrowing journey from Africa into slavery and up through the Jim Crow South.

The Reverend Johnny Ray Youngblood, long an innovator in the Black church, first conceived the commemoration six years ago. He believed that his congregation and African-Americans as a whole could only surmount the legacy of slavery by confronting it.

Rev. YOUNGBLOOD: In order to get well, you have to go back through what made you sick in the first place. So this regret and this repulsion to remembering was something I had to find a way to fight against. The question was: What are we going to do with the emotions? You know, when we start to realize this and feel the pain, the anger, the agony, what do we do with that? And my point was you will be in good company, we will keep an eye on you and we will get you through this. 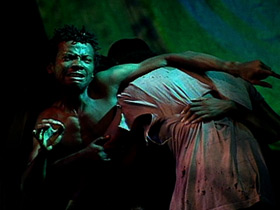 FREEDMAN: The first African slaves were brought to Brooklyn nearly 350 years ago. In remembering those ancestors and millions of others who were carried across the ocean in chains, St. Paul Community Baptist Church has set an example for black congregations nationwide.

FREEDMAN: Indeed, Reverend Youngblood believes that the process of psychological healing is ultimately bound up in the realm of the spirit.

Rev. YOUNGBLOOD: Somehow or another, there's this peculiar line of demarcation that has been drawn between psychology and religion when it may well be the same thing because religion does have a psychological effect. So, therefore, to me, the African-American church should indeed be the lead institution in terms of the restoration, the redemption, the healing, the rebirth of a people and of a nation.

Mr. CORTEZ STALLINGS (Church Member): It's about connection. It's about connecting not just to the past but to the peoples of the past and relationships. I wept tears in this "Ma'afa Suite" for peoples and peoples in my family whose situation I have been cut off from. So the Ma'afa connection, it connects me to old photos, to family stories. 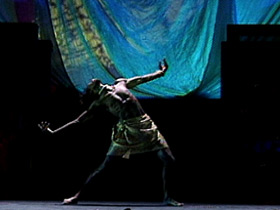 Ms. EMILY FRANCES WALTON (Church Member): My grandmother is now 97, and so the stories of her great-grandmother, Emily, coming off a ship in Jamestown, Virginia, is powerful. Her story about her father, the son of the plantation owner where her mother lived, is powerful.

I'm hungry. What -- where do we come from? How did we get here? I'm getting all those stories, and I'm giving them to my children.

FREEDMAN: And that may be the ultimate lesson of the Ma'afa commemoration, the power of history to bind together the generations and point the way forward.

FREEDMAN: From Brooklyn, where the past has met the present, this is Samuel Freedman for RELIGION & ETHICS NEWSWEEKLY.

At St. Paul Community Baptist Church in Brooklyn, New York, Reverend Johnny Ray Youngblood has developed a powerful program of music, dance and theater. The pageant is called the “Ma’afa Suite”, and the objective of the show is to help African-Americans heal slavery’s hidden wounds.