BOB ABERNETHY: Now, the latest battle in the long-running war between conservatives and moderates in the Southern Baptist Convention (SBC) — with almost 16 million members, the largest of all Protestant denominations, by far.

At its meeting in Corpus Christi, the huge Texas Baptist Convention — nearly one fifth of all Southern Baptists — sent a strong signal of discontent to the national SBC. Led by moderates, the Texans voted overwhelmingly to cut $5 million of the $25 million they send the national group each year. 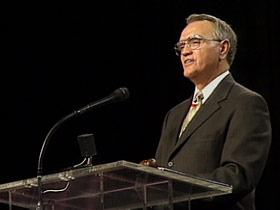 The president of the Texas Baptists railed at what he called a “loveless, witch-hunting fundamentalism.”

Dr. CLYDE GLAZENER (President, Texas Baptist Convention): Jesus is not pleased today by religious folks who become thought police, or their followers, and dictate their belief patterns, even if they claim to be evangelicals.

ABERNETHY: The Texas Baptists also voted to open up their group to members from other states and that raised the question of a full SBC split.

Dr. JAMES DUNN (Wake Forest University): It is possible that this action by Texas Baptists could set in motion a chain of reactions that would lead to another national convention, another national denomination.

ABERNETHY: After Martin Luther preached “the priesthood of all believers,” Baptists developed their radical commitment to freedom. No hierarchy, no creed, absolute separation of church and state.

Baptists do not practice infant baptism, because they think each person should be old enough to make his or her own faith decision. Baptists speak of “soul freedom.” 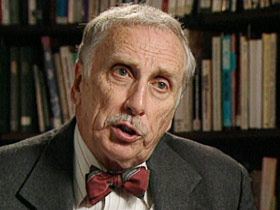 ABERNETHY: In 1979, political and theological conservatives won control of the Southern Baptist Convention. They insisted that the Bible is the true, literal word of God and that every SBC employee must affirm the Baptist Faith and Message statement.

At its convention this year, SBC leaders changed the Faith and Message in a way some moderate Baptists thought gave the Bible more authority than Jesus. Moderates charged the SBC leaders were creating a creed; conservatives denied it.

ABERNETHY: The differences are narrow, but — in general — moderates say, their primary authority is personal experience of Jesus, and conservatives say, it is scripture.

Dr. RICHARD LAND (Southern Baptist Convention): The most important thing that I ever learned in my life, or will ever learn, I was taught in vacation Bible school in a Southern Baptist Church in Houston, Texas, and it is this: Jesus loves me this I know for the Bible tells me so. 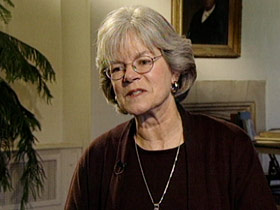 ABERNETHY: Two years ago, the SBC offended many moderates when it emphasized a wife’s duty to “submit herself graciously” to her husband. Then, at its convention last June, the SBC said that women should not be pastors of Baptist churches.

ABERNETHY: Last month, after the SBC statement on women pastors, former President Jimmy Carter announced he could no longer be part of the SBC. Now, with the Texas vote, the question is what the repercussions will be in other states, and for Baptists in Texas.

Prof. AMMERMAN: What we see is a fragmentation. The Southern Baptists Convention will issue their resolutions, pass their motions, and make headlines, but it will be more and more clear that they do not speak for all, even all Southern Baptists as Baptists align themselves with a variety of other organizations.