BOB ABERNETHY: One of the greatest powers a president has is appointing new justices to the Supreme Court. In the next few years, the Court is expected to rule on a variety of closely-disputed and controversial issues, many of them of special interest to religious communities: school prayer, for instance, and other church-state questions. We asked Tim O’Brien to look ahead at Gore, Bush, and the Court.

TIM O’BRIEN: Al Gore isn’t the only one making this prediction. 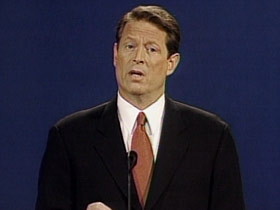 Vice President AL GORE (Democratic Presidential Candidate): The next president is going to appoint three, maybe even four, Justices of the Supreme Court.

Which must come as interesting news to the Court’s current justices, all of whom appear to be in reasonably decent shape, none of whom appears to be in any hurry to go.

The history of Supreme Court nominations cuts two ways. While it is risky to predict how many appointments any president might get, it is a fair bet whoever wins the election will get at least one. With the single exception of Jimmy Carter, every president who has served a full four year term has eventually had at least one appointment to the Court.

O’BRIEN: And many a president’s greatest legacy has been in his Supreme Court appointments. A single appointment can, over the lifetime of the appointed, make a huge difference in the development of the law. 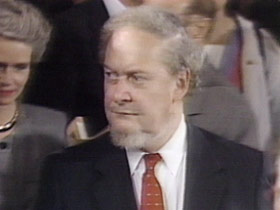 Defeated nominee Robert Bork has written that had he been confirmed to the Supreme Court rather than the somewhat less ideological Anthony Kennedy, he would have voted to overrule Roe v. Wade, that he would have allowed some organized prayer in public schools, and put burning the American flag beyond the protection of the First Amendment.

Because the Court was divided 5-4, the opposite way on each of these questions, with Kennedy in the majority, a “Justice Bork” would likely have carried the day. The Bork-Kennedy difference may continue to be felt in unforeseeable areas of the law for the indefinite future.

Roe v. Wade, the decision announcing a constitutional right to abortion has become an issue in the current election even though that decision is among the least likely to be overruled. To do it, George Bush would need to replace at least two justices who support the decision with justices [who are] opposed.

But a single new appointment could turn the Court around on a host of other explosive issues on which the Court remains sharply divided — like separation of church and state.

Bush says he would try to appoint justices like Antonin Scalia and Clarence Thomas, who favor greater government accommodation of religion, including financial aid to religious schools.

The views of the individual justices have ranged from one extreme to the other.

Chief Justice William Rehnquist has characterized the so-called “wall” separating church and state as “a useless metaphor,” insisting all the Constitution forbids is the government establishing an official religion. 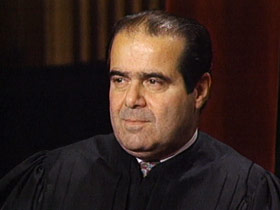 But for almost thirty years, the Court has prohibited any government activity that:

That test has been difficult to apply, particularly when cities sponsor Nativity scenes at Christmas time or menorahs during Hanukkah or when religious groups seek the same access to school facilities that non-religious groups have.

Despite its longevity, most of the current justices don’t like the current test for evaluating church-state issues. Justice Scalia has compared it to “… some ghoul in a late night horror movie that repeatedly sits up in its grave and shuffles abroad … frightening little children and school board lawyers. …”

But the justices have been unable to agree on any new test. Should that change with a couple of new justices, a revolution in church-state relations could follow.

A single appointment could turn the Court around on other issues as well — like affirmative action.

George Bush is against it:

Governor GEORGE W. BUSH (Republican Presidential Candidate): It’s not the way America is all about.

Al Gore says some affirmative action can be beneficial. The issue has divided the Court 5-4. 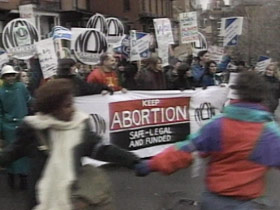 To Gore, and others, the integrity of the political system is also on the line this Tuesday:

Vice Pres. GORE: I will make the McCain-Feingold campaign finance reform bill the very first measure that I send to the Congress as president.

Governor Bush says he also favors some campaign finance reform, but his appointments to the Court — if they’re like Scalia and Thomas — would be much more likely to reject most current proposals as a violation of free speech.

The impact a president can have on the Court is also a function of luck. Although Franklin Roosevelt did not get any appointments in his first term, he ended up naming eight justices to the Court and elevating a ninth to be Chief Justice. Seven of Roosevelt’s eight appointments came within a four-year span.

Of course, justices don’t always fulfill the expectations of the presidents who appoint them. From 1968 through 1992, four Republican presidents, each fiercely critical of the liberal criminal law decisions of the earlier Warren Court, failed to get a single one of those landmark decisions overruled — notwithstanding nine consecutive appointments to the Court.

No one can predict how many appointments the next president might get or gauge the impact those appointments might have. But with the Court so evenly split on so many high profile issues, a single new appointment could have a powerful impact on several aspects of our lives.

For RELIGION AND ETHICS NEWSWEEKLY, I’m Tim O’Brien in Washington.