LUCKY SEVERSON, guest anchor: Many Americans don’t realize it, but before the mid-1950s, it was legal for preachers to endorse political candidates from the pulpit. Not so today. Such an endorsement could cost a church its tax-exempt status. But if some members of Congress have their way, there will be a new law, much like the old one, and political preaching would be legal all over again.

Sunday morning at the Redemptive Life Fellowship Church in West Palm Beach, Florida, one of America’s fastest-growing churches, according to its bishop. He’s inside, past the Roman lions singing praises to the Lord. 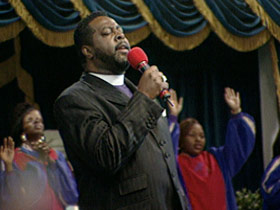 Bishop Harold Calvin Ray is a driving force behind this nondenominational congregation. He has involved the church in several faith-based community development programs. And if Bishop Ray had his way, he would be even more involved.

Bishop HAROLD CALVIN RAY (National Center for Faith-Based Initiative, Florida): As any minister can tell you, we certainly are standing in a position of tremendous influence and information for many persons who perhaps may not be as well read, as knowledgeable with regard to not only who the politicians are, but what the political impact of their positions could be.

SEVERSON: The bishop, who is no stranger to the political scene, is a vocal supporter of controversial legislation Congress is now debating. If approved, it would let preachers preach politics from the pulpit and endorse candidates without losing the church’s tax-exempt status. But as strongly as Bishop Ray supports the legislation, Pastor Jeffery Scott opposes it.

Dr. Scott is senior pastor at the Colonial Avenue Baptist Church in Roanoke, Virginia. He says his congregation has no idea how he votes, and he intends to keep it that way. 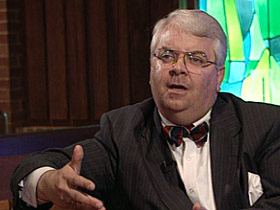 Dr. JEFFERY SCOTT (Senior Pastor, Colonial Avenue Baptist Church): Churches should have influence versus power. Churches need to be in a spot where they can inform people about the issues and empower them to make their own decision based upon the Scripture and the newspaper, and let them wrestle it out. There are others who would like to use the church not for influence but for power.

SEVERSON: But Bishop Ray says it’s not about power as much as giving preachers the same First Amendment rights as ordinary citizens.

Bishop RAY: There’s been an unnecessary abridgment of First Amendment rights in many ways to clergy, merely under the guise of separation of church and state.

SEVERSON: The bishop’s views are shared by several conservative Christian groups and leaders. This is Dr. James Kennedy of Florida’s Evangelical Coral Ridge Ministries testifying before Congress for the legislation.

Dr. JAMES KENNEDY: If we selectively silence those who have the greatest vested interest in trying to maintain the moral law of God, we are inevitably going to see a decline in the moral status of the nation. What we have seen in the last 48 years. 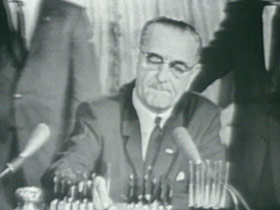 SEVERSON: It was 1954 when former President Lyndon Johnson, then a senator, pushed through an amendment to the tax code, some say to silence his critics. It wasn’t aimed at churches, but the amendment had the effect of making it illegal for preachers to politic from the pulpit. Before then, political preaching had always been legal.

Since the amendment, conservative groups, like TV evangelist Pat Robertson’s Christian Coalition, have charged that they have been unfairly targeted by IRS investigators. Five religious organizations and two churches have lost their tax-exempt status. One was the church at Pierce Creek in upstate New York, after it sponsored newspaper ads telling Christians to oppose presidential candidate Bill Clinton.

Christian conservatives say African American churches have often supported Democratic candidates while the IRS looked the other way. Case in point: former Democratic congressman and pastor Floyd Flake received only an IRS caution after he appeared to endorse candidate Al Gore in campaign 2000.

Pastor FLOYD FLAKE: But I will say to you this morning and you read it well, this should be the next President of the United States.

SEVERSON: Bishop Ray says preachers have been afraid to speak out on important controversial issues, and the legislation will change that. 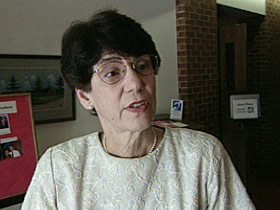 Bishop RAY: I think that’s going to give opportunity for a preacher to give fair comment on just where are the values and the morals and mores of that constituency, because the marketplace of ideas that is sitting in that pew every Sunday is one that I think our government has become too detached from.

SEVERSON: But those who want the legislation first need to convince most of the churches around the country, because even here in the Bible Belt, there are churchgoers and preachers who think that politicians and the pulpit ought to stay where they are — separate.

Dr. SCOTT: The vitality of American religion has been that freedom to allow us to stand in the pulpit and say “Thus sayeth the Lord.”

SEVERSON: Here in Roanoke at Pastor Scott’s church, almost everyone we spoke with agrees with a recent national survey that found 70 percent of respondents don’t think churches should endorse political candidates.

BARBARA NESMITH (Parishioner, Colonial Avenue Baptist Church): First as Americans and certainly as Christians, we are encouraged to think for ourselves. Make our decisions not based on just what someone else tells us. Even someone we respect.

SEVERSON: But listen to the members of Bishop Ray’s church. 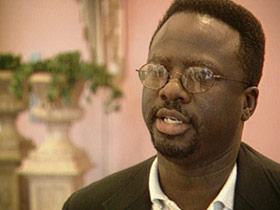 HERBERT OWENS (Parishioner, Redemptive Life Fellowship Church): In the African-American community specifically, the church has always been a magnet for us; it’s been a bedrock of information.

DONALD MINOR (Parishioner, Redemptive Life Fellowship Church): As far as I’m concerned there should have never been a line between church and state. And I don’t know how you can separate it, and I definitely think it is appropriate.

SEVERSON: The proposed legislation is also about money. Some critics say it would allow tax-deductible contributions to tax-exempt churches, which could then be funneled to favorite candidates.

KAREN WHITE (Parishioner, Redemptive Life Fellowship Church): Why not? Corporations do it. Corporations have their own agendas. So why not the church, who has God’s agenda?

SEVERSON: There are actually two Republican bills. One allows clergy to endorse political candidates. The other draws a line at 20 percent of church revenue for political expenditures. Bishop Ray says either bill would give his members, mostly African American, a bigger voice.

Bishop HAROLD RAY: With this change in the law, we’re going to see the disenfranchised economically and disenfranchised in terms of their voice really being heard, really starting to rise and take a stakeholder interest. 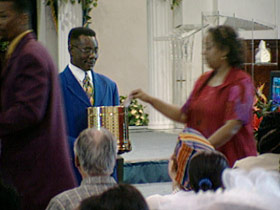 Dr. SCOTT: The religious right is certainly very powerful politically. And I think we get this to our detriment. It’s a side street on the highway of religion that needs to be avoided.

SEVERSON: Pastor Scott may not like to play politics, but each Sunday he does play with puppets. And there are lessons a politician might preach.

Dr. SCOTT (Speaking to children): Doesn’t he, boys and girls? God does make us all different colors, and he loves each one of us whether we’re gray like Old Tex or whether we’re black or white or whatever color we are.

If a church is focused on what it ought to be focused on, helping people with the problems of this world and help them get to the next world in a reasonable fashion, we don’t have time to play around with politics.

SEVERSON: On the other hand, Bishop Ray and those with him think the church can’t afford not to get involved in politics.

Bishop RAY: I think that the mission of the church should be that of creating both socioeconomic and spiritual empowerment in our communities. If that impacts the political process, so be it.

SEVERSON: The bishop probably won’t get what he wants from Congress this year, but he and other preachers will keep speaking out, within the IRS guidelines of course, and there’s always next year.