LUCKY SEVERSON, guest anchor: Pope John Paul II is here in the Western Hemisphere on his 11-day visit to Canada, Guatemala and Mexico. It is a difficult journey for John Paul, a trip of determination and inspiration. He began in Canada where he has been presiding over World Youth Day activities with the faithful, most under the age of 30. Kim Lawton has our report from Toronto. 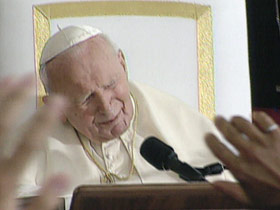 KIM LAWTON: It was cheers and tears, a welcome showing the international superstar status the frail 82-year-old still commands.

More than 250,000 young Catholics from 169 nations came here to see Pope John Paul II and to listen to his vision of the role young people can play in the Church.

LAWTON: He tells them Jesus Christ is counting on them.

Pope JOHN PAUL II: Christ needs your youth and your generous enthusiasm to make his proclamation of joy resound in the millennium.

LAWTON: And he said the Church was looking to them with confidence. 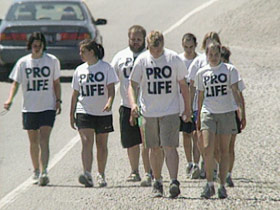 LAWTON: It’s a message that resonates deeply with many here, including 19-year-old J.D. Flynn.

LAWTON: John Paul created the biannual World Youth Day nearly 20 years ago as a way to excite young people about the Church. His appearances are always the highlight, but World Youth Day has also evolved into an entire week of activities that include fun, friendship and spiritual development.

J.D. was part of a group of young Catholics who walked here all the way from San Francisco, nearly 3,000 miles. Along the way they prayed and showed their opposition to abortion. They arrived on opening day and immediately began making friends. Organizers believe World Youth Day offers a key opportunity to affirm Catholic identities. 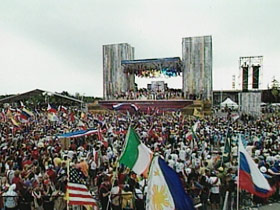 LAWTON: Besides the festival atmosphere, the organizers also built in serious religious components. There were daily teaching sessions, called Catechesis classes led by the numerous bishops and cardinals also here.

Cardinal FRANCIS GEORGE (Archdiocese of Chicago): This is an encounter with the Lord, and you have to be taught who the Lord is. So the catechesis does that, and then out of that, generosity is touched and they do service works. So, it’s prayer, catechesis, service.

LAWTON: There was also daily mass. And at a nearby park, 1,000 priests were commissioned to hear confessions in various languages, at 200 separate stations. Some experts believe the emphasis on such traditions of the faith has great appeal, particularly for the under-25 generation.

COLLEEN CARROLL (Author, “The New Faithful”): The very thing their parents saw as oppressive, these young adults see as exciting, even exotic.

LAWTON: She admits the participants here may not be typical of their generation, but she’s one of several experts who see a growing trend toward a more traditional practice of Christianity. 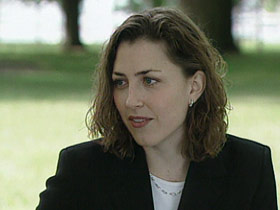 Ms. CARROLL: These are kids and young adults who tend to go to daily mass or try to. They go to confession, reconciliation, as often as they can, sometimes every two weeks, which astounds, again, many of their parents. But to them, it’s new, and more importantly, they really feel a spiritual connection.

LAWTON: World Youth Day officials hope to capitalize on the spiritual connection many young people still feel with this Pope despite his age and ill health. Upon his arrival, John Paul refused the waiting hydraulic lift and instead exited his plane on foot. Young people here were impressed.

LAWTON: Church leaders acknowledge this event comes at a time when abusive scandals have made it more difficult for some Catholics to still believe. The U.S. sex abuse crisis came up several times, including at a question and answer session hosted by Bishop Wilton Gregory, president of the U.S. Conference of Catholic Bishops.

UNIDENTIFIED GIRL: A lot of people will come up and berate you because of what’s going on, and it’s really hard to say, “You know, the Church is still strong. That’s not what’s representing it, and you’re not seeing the true Church.” But I was just wondering how are we supposed to handle people like that? 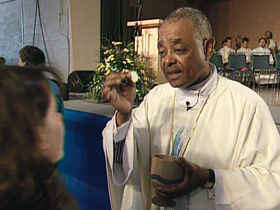 LAWTON (to Bishop Gregory): What message do you hope this sends about the image of the Church?

Bishop GREGORY: Well, we have 55,000 young people from the United States here, and I think the image and the message that that sends is that we have a very strong, very vibrant Catholic youth — that the next generation is strong in its faith and wants to get stronger.

LAWTON (to Ms. Carroll): Is there a spiritual impact to an event like this?

Ms. CARROLL: Whenever you take a large group like this, you’re going to have kids who came along for the ride, but you’d be surprised how many walk away with something they didn’t even come here with.

LAWTON: Church leaders say they hope this World Youth Day will, indeed, lay a strong spiritual foundation for the young people who will be guiding the Catholic Church into the future. I’m Kim Lawton in Toronto.