LUCKY SEVERSON, guest anchor: In England, a new spiritual leader for the worldwide Anglican Communion, which includes the Episcopal Church in the U.S. This week, Queen Elizabeth II, the official head of the Anglican Church, appointed Welsh archbishop Rowan Williams to become the 104th Archbishop of Canterbury. Williams is a noted theologian and writer whose critical views on the war in Afghanistan and support for female bishops and homosexual priests have already generated headlines. When he succeeds George Carey as Archbishop of Canterbury in October, Williams will be the first non-Englishman to head the Church since it split from Rome in 1534. Deryl Davis has our report. 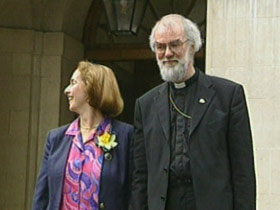 DERYL DAVIS: He’s a complex figure: a traditionalist in theology who believes in the virgin birth and physical resurrection of Christ, but whose social and political views run counter to those of more conservative elements in the Anglican Communion. David Anderson is editor of the RELIGION NEWS SERVICE.

DAVIS: But Williams’s critics say his views on homosexuality and other social issues could increase divisions within the Communion. Anglican leaders in the Third World have already raised concerns about the more liberal views of their western counterparts. Episcopal Action Director Diane Knippers, who calls herself a traditionalist, says Williams has a big job ahead of him.

DIANE KNIPPERS (President, Institute of Religion and Democracy): The challenge that Archbishop Williams will face is to find a way to hold the Anglican Communion together. It will be essential that he find a way to reach out to more conservative, biblical, and orthodox voices.

DAVIS: No one can predict what Williams’s impact on the Church will be. As Archbishop of Canterbury, his authority is mostly spiritual, a first among equals in the Anglican Communion. But if the past is any indication, Rowan Williams will make his voice heard worldwide.

Some books by Rowan Williams: