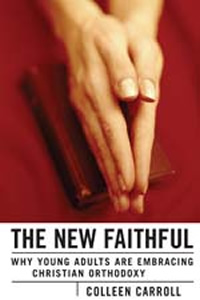 Read an excerpt from THE NEW FAITHFUL: WHY YOUNG ADULTS ARE EMBRACING CHRISTIAN ORTHODOXY by Colleen Carroll, forthcoming in September from Loyola Press:

Church leaders would do well to listen to young orthodox believers about what new initiatives are needed. If they do, they will hear that churches need to be bolder in proclaiming Christian doctrine — particularly the reality of sin and the need for salvation — which is absent from so many mainline churches but attracts converts by the thousands to so many evangelical ones. They might also hear that conforming their churches to the world repels the young, but challenging the young to conform to Christ inspires and attracts. Just ask the leaders of conservative evangelical fellowships that attract students by the throngs on secular campuses. Or ask Pope John Paul II, a man who convenes young adults by the millions for World Youth Day festivals that celebrate sacrifice and sanctity.

Catholic leaders in particular should reassess the power and promise of orthodoxy for youth ministry. In an age when worldly values have largely overwhelmed Catholic identity among the young, orthodoxy accentuates that which is most distinctive about Catholicism — its rituals, tough teachings, and traditions.

This grassroots orthodox movement has arisen spontaneously among young Catholics battling to save their faith from secularization. Older Church leaders should resist the urge to view the movement through the liberal-conservative lens that dominated their day. They should foster its growth with solid catechesis. And they should be sensitive to the creative, communal instincts of orthodox Catholics, who are eager to establish such events as praise-and-worship eucharistic adoration sessions and small-group catechism studies in their parishes.

Some young believers crave tradition. Others want contemporary worship. A large majority seek more meaning in their worship, and many are finding that meaning in the Eucharist — the case of deep, profound conversions for a great many Catholics and Orthodox Christian. This generation craves mystery and a connection to the traditions that the modern world has stripped away. Those yearnings bode well for the historical churches in general, and the accompanying desire for moral guidance from a trusted authority figure portends a positive future for the Catholic Church in particular.