BOB ABERNETHY, anchor: This Martin Luther King holiday weekend launches a year of milestone anniversaries for the slain civil rights leader. April will bring the 35th anniversary of his assassination, and August, the 40th anniversary of his "I Have a Dream" speech in Washington. This weekend, a new art exhibit focused on King opens in Minneapolis. In our special report, Kim Lawton explores the connections between spirituality, art, and the civil rights movement.

KIM LAWTON: Thirty-five years after his death, the nation is still coming to terms with the life of the Reverend Martin Luther King Jr. Theologians, activists, politicians, and historians continue to discuss King's legacy -- and so do artists.

For the next two months, that artistic exploration is taking center stage at the Frederick R. Weisman Art Museum in Minneapolis. The museum is showcasing a traveling exhibition developed by the Smithsonian Institution. It's called "In the Spirit of Martin." The exhibit -- and a companion book -- pull together more than 130 works of art, a collection as varied as the sometimes controversial man the project seeks to honor. 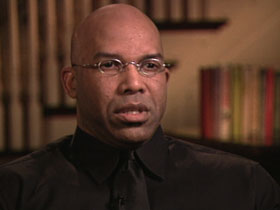 Dr. ALLEN CALLAHAN (Macalester College): As a nation, we still don't quite have a fix on what King looked like, that is, how he appears to us, how we should understand him.

LAWTON: Professor Allen Callahan has studied King and written about him. Callahan says the diversity of the exhibition shows the numerous responses people still have to King.

Dr. CALLAHAN: King is being interpreted. I've seen the same thing in images of Jesus. How Jesus is rendered is really driven by people's understanding of Jesus, and not by anthropological considerations or forensic reconstructions of what some guy looked like who's living in Palestine in the first century.

LAWTON: One work identifies King and his death with Jesus and his crucifixion.

Dr. CALLAHAN: He did identify readily with the figure of Jesus, but in his theology anybody who had the audacity to refer to herself or himself as a Christian had to take that weight. That is, you had to, if you were going to call yourself a Christian, you had to identify with the life and the death of Jesus.

Dr. CALLAHAN: It most evokes him. It constrains us to see King as a man, with the burden of a nation at his back.

LAWTON: Religion professor Vincent Harding was active in the civil rights movement. He says it's appropriate to explore King's legacy through art, because creativity was central to the African-American struggle for freedom. 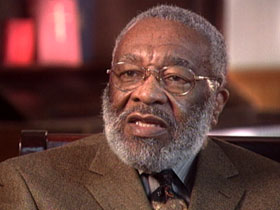 Dr. VINCENT HARDING (Veterans of Hope Project): I see creativity not simply in creating particular works of art, or creativity in doing particular pieces of music, but the creativity was expressing itself by people saying, "We can build a better world."

LAWTON: Today, Harding and his daughter Rachel run the Veterans of Hope Project at the Iliff School of Theology in Denver. They are videotaping interviews with civil rights leaders to document the history and motivations of activism. They say they have found an undeniable connection between religion, the arts, and social change.

Dr. RACHEL HARDING (Veterans of Hope Project): The impulse to art, the impulse to creativity is very similar to the impulse to spirituality and to imagining and creating a more humane society. It's a way to connect to something that gives you deep roots. And with the roots, then you're kind of able to stretch out and move in directions that perhaps you wouldn't have had the strength or the inspiration to do otherwise.

LAWTON: Vincent Harding says King always had a great affinity for the arts.

Dr. V. HARDING: Martin King was an artist in a whole variety of ways. And one of the ways in which he was an artist is in his use of the language of the people. In a way, you could say that his preaching was a kind of singing, that was his artistry.

LAWTON: Art in the form of music played a key role in the civil rights movement. During meetings and rallies and marches, people sang songs from the rich musical tradition of the black church. Often, they sang the old spirituals of slavery, with new words and new meanings.

LAWTON: Harding has audiotapes of some of the songs from that time. 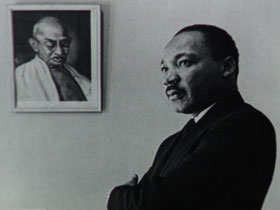 LAWTON: King himself always had songs at his meetings.

Dr. V. HARDING: For King, the songs were as much a part of his life as breathing. It was nothing that had to be added on or brought in, he didn't have to say, "Oh, we ought to have some songs in this mass meeting." There was no way you could meet without singing.

Dr. CALLAHAN: It was something that was indispensable to the maintenance of the spiritual fortitude that these people showed in the face of great danger and even death.

LAWTON: King was especially inspired by gospel singer Mahalia Jackson, who joined him at several rallies. She also sang at his funeral.

LAWTON: The musical heritage from that era has spread throughout the world. Songs such as "We Shall Overcome" became part of the struggle against communism in places like East Germany.

Dr. CALLAHAN: They've got plenty of great hymns in Germany. Why sing a Negro spiritual? But by the time the Wall fell, that song had become identified with freedom, not just for a bunch of people who were the descendants of slaves in the United States, but for everybody.

LAWTON: King recognized the importance of art in preserving the civil rights legacy. In 1963, he said the courageous acts of civil rights heroes "cry out for songs to be sung about them and pictures to be painted of them." 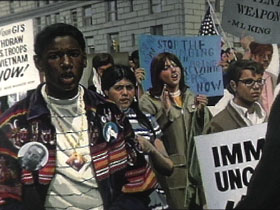 Rachel Harding believes that is happening.

Dr. R. HARDING: I just am thrilled when I travel to different parts of the country and I see the kind of energy and impetus that the movement that my parents and people of their generation were part of has just continued to ignite in folks that are my age and even younger. It's just very, very exciting, and you see it across the arts.

LAWTON: Many believe it's more important than ever to find new ways of keeping King's legacy -- and his message of equality, peace, and justice -- alive.

Dr. CALLAHAN: Dr. King is reduced more and more with each passing year to a predictable number of sanitized sound bites, and the challenge that he leveled to this society, which is very fresh, which challenges us even now, is one that many people not only don't want to hear but don't want other people to hear.

Dr. V. HARDING: Every mode and means of creativity that we can find to tell this story -- it is absolutely necessary, because the story must not only be a story, it must be a reason for living for another generation.

Thirty-five years after his death, the nation is still coming to terms with the life of the Reverend Martin Luther King Jr. Theologians, politicians, historians, and artists continue to discuss King’s legacy.