BOB ABERNETHY, anchor: According to the National Council of Churches Yearbook, the ranking of major Christian groups in the U.S. goes Roman Catholic, by far the largest; then Southern Baptist and United Methodist; and the fourth largest is the Church of God in Christ, a Pentecostal denomination many Americans may never have heard of.

Next week in Memphis, COGIC, as it’s known, has its annual Holy Convocation with 40,000 people expected. Today, a look at what may be the fastest growing denomination in the country. 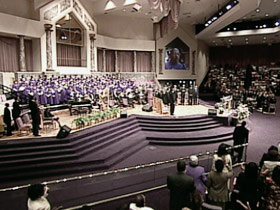 UNIDENTIFIED MAN #1: Come on, come on, people. Let’s give Him glory in this place. (singing) All the glory.

The 11 a.m. Sunday service at the Temple of Deliverance Church of God in Christ in Memphis, Tennessee — it has 6,000 active members, almost all of them African-American. There’s a 30-piece orchestra and a 100-voice choir.

The Church of God in Christ teaches classic Christian doctrine, the Bible is God’s word. But COGIC members also put special emphasis on the power of the Holy Spirit, of which the surest sign — many say — is speaking in tongues. 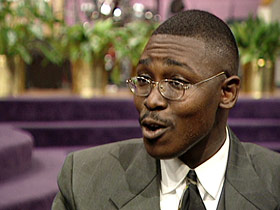 MICHAEL SCRUGGS (Temple of Deliverance): Oh, it feels good. It gives you so much joy. A celestial connection with you and God.

ABERNETHY (to Mr. Scruggs): Does that happen to you often?

Mr. SCRUGGS: Oh yes, it happens to me all the time. I love it. I don’t mind. I could be in the grocery store. I don’t mind. Wherever the spirit of the Lord is, there is liberty, and I have the liberty and the freedom of the Holy Ghost and I just can love it.

ABERNETHY (to Mr. Scruggs): Is it something that you can imitate?

Mr. SCRUGGS: Oh no. The Holy Ghost is something that you cannot imitate. You can’t imitate at all.

ABERNETHY: The pastor of the Temple of Deliverance and the Presiding Bishop of the full Church of God in Christ is Bishop G. E. Patterson. He recalled the Bible account of what happened to Jesus’ disciples, 50 days after Easter. 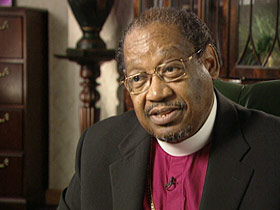 Bishop G. E. PATTERSON (Church of God in Christ): On the day of Pentecost, they all gathered in one place and while they were praising God, they begin to speak in other tongues.

So when one receives the gift of the Holy Spirit, something happens down on the inside and Jesus said, from out of your belly, comes from down within. You are opening your mouth to express praise to God in the language that you know. But instead, another language comes out.

ABERNETHY: The Church of God in Christ is an American-born denomination that grew out of the Deep South in the late 1800s and then was inspired by a famous revival in Los Angeles in 1906.

The site was a former stable on Azusa Street, where many people spoke in tongues, giving birth to what became known as the Pentecostal Movement. One of those who spoke was a visiting pastor from Mississippi — Charles Mason, the founder of COGIC, who took his experience back with him to his church in Lexington, Mississippi, which is still growing strong.

COGIC celebrates baptism as a symbol of having been converted, born again. It also teaches that what it calls another kind of baptism — by the Holy Spirit — brings gifts such as healing and prophecy.

Many COGIC members are so exuberant in their praise because, they say, God has rescued them. 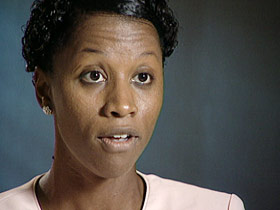 TEMPEST WILLIAMS (St. Paul’s Church of God in Christ): When you think about all the things that God has done for you and when I look back on my life, I think about all the things that he has done for me and what he brought me from, because I didn’t grow up in the church. I come from the streets. I come from drinking, smoking included. I didn’t know anything about the Church of God in Christ at all.

And so when I think about how he delivered me, set me free, changed my attitude, my outlook, and my uplook, I’m grateful.

Elder NORVILLE VAN WOFFOLK (Church of God in Christ Historian): No card playing, absolutely no drinking, and no public dancing. We dance in church.

ABERNETHY: Holiness becomes possible, says COGIC doctrine, because of sanctification –receiving the power to choose not to sin.

Professor DAVID DANIELS (McCormick Theological Seminary): People would teach, you can speak in tongues all day long, but if you’re not living a holy life, it’s nothing.

ABERNETHY: The typical COGIC church is in a poor part of a big city like this one — the United Tabernacle — on the West Side of Chicago. It has about 70 active members, and it’s family-run. Michael Thurston, 34 years old, succeeded his father as pastor. He is both preacher and organist. His wife, Gina, is a gifted singer, and their children play drums and sing in the choir.

Pastor MICHAEL THURSTON (United Tabernacle Church): My thought today is, well, what do you know? 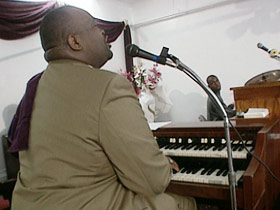 ABERNETHY: Michael Thurston is studying for a college degree, but he has no seminary training, and that’s typical of most COGIC pastors. It’s also one of the reasons for COGIC’s growth. Anyone who feels a call to the ministry can start a church, and many do. COGIC is working to improve pastors’ education, and Thurston strongly approves.

Pastor THURSTON: Sometimes we, out of — I guess you would say eagerness to start a ministry, we jump out there inadequately prepared, and that sometimes can cause shipwrecks.

ABERNETHY: Thurston is a third-generation COGIC member, trained by his father, the former pastor. He’s worked as a drug counselor, and he’s confident he’s qualified to minister.

Pastor THURSTON: I can relate to a lot of the hurt, a lot of the anger and the frustration. The peer pressure, the drugs, the gangs, the violence. The abuse, the molestation. Who better to talk to the people from the West Side than someone who was born and raised on the West Side?

UNIDENTIFIED WOMAN: Amen, we do have Regina Thurston with us. Amen. Put your hands together, everybody, and receive this woman of God on this side of heaven.

ABERNETHY: As COGIC pastors have always done, the Thurstons take their ministry into the streets, singing gospel this evening at a neighborhood carnival.

COGIC’s energy and growth have not gone unnoticed by national political leaders. Meanwhile, some of its own younger leaders are lobbying in Washington for COGIC’s share of federal money for social services. 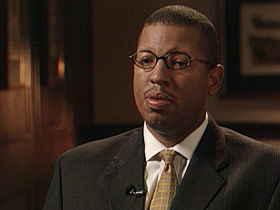 Minister BARRETT-OSAHAR BERRY (Church of God in Christ): Our political agenda right now is: How do we secure funds for the people that we represent?

ABERNETHY: The Church of God in Christ has grown by several million members since the 1960s with its emphasis on spiritual experience and its upbeat music, which is especially attractive to the young. Minister Berry thinks COGIC’s membership could double in the next ten years.

Mr. BERRY: COGIC is, in a traditional worship service, is very emotional practice. I think it gives you all the angles of being a Christian.

ABERNETHY: Pentecostal and other demonstrative churches are growing fast abroad. Bishop Patterson says COGIC is represented now in more than 50 countries, and he expects big new growth in Africa.

Bishop PATTERSON: That is a desire among the African brothers to have a relationship with a church that is predominantly of their own ethnicity.

ABERNETHY: Women play a major role in COGIC churches as teachers, as mentors called church mothers. But there are very few women serving as pastors, and there’s growing pressure on the church to permit women’s ordination.

Bishop PATTERSON: The power of faith in the spoken word. 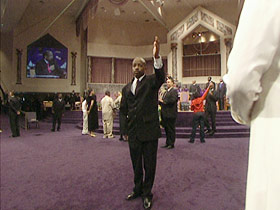 ABERNETHY: As his worship service is televised around the country and his denomination continues to grow, Bishop Patterson says COGIC members have come a long way from the days where they were mocked as holy rollers.

Bishop PATTERSON: I grew up with the ridicule of it all. Now we have lived long enough to see others trying to receive what I grew up with. And that’s quite satisfying, terribly gratifying.

ABERNETHY: Inside the Temple of Deliverance, the service closes with written prayers brought to the pulpit.

ABERNETHY: And then the altar call — inviting people to give their lives to Jesus.

Bishop PATTERSON: You can claim your salvation today. Hallelujah.

ABERNETHY: When the service was over, two and a half hours after it began, people familiar with COGIC worship assured a first-time visitor accustomed to more restrained worship that nothing that had happened had been unusual.