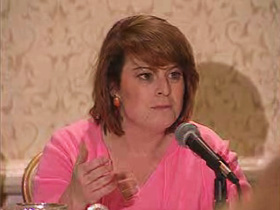 It’s almost hard to know where to start in talking about this study, because there’s so much in it. It is such an in-depth look at how evangelicals live. But we made a very deliberate decision to look at how evangelicals live in contrast or in comparison with everybody else because it’s impossible to say [that there is] something distinctive about evangelicals in America without knowing how they live compared to other Americans. And how do we challenge some of the stereotypes that people [have] about evangelicals without understanding where they actually are quite similar to other people? Where are the stereotypes or the assumptions that we make about Evangelicals confirmed? We did this quite deliberately and so the study is actually quite large. Overall, the sample is about 1,600. But we have an over-sample of African-Americans, an over-sample of Hispanics, and an over-sample of white evangelical Protestants so that we had a big enough sample size to really look at this in-depth and actually look at some of the differences among white evangelical Protestants as well. It’s a very rich study and, as I said, it’s almost hard to know where to start.

In no particular order, what is surprising? And, in no particular order, what kind of assumptions have we made [and] are they confirmed? Let me start by saying in some ways what is surprising. I think — and Bob [Abernethy] made this point at the very beginning of his comments — the question are Evangelicals “mainstream” (and that word itself is loaded and normative and I almost hate to say it) — but do they see themselves as mainstream and are they mainstream, and I was surprised actually at the percentage of evangelicals who said, “yes, actually I feel like I’m part of the mainstream.” And when you dig down into the numbers, you actually can see why they said that. Let’s take, for example, where they live. They are slightly more likely to be found in the South, but not that much more — about five percentage points more likely to be in the South. But otherwise, [they are] distributed across the country the way the rest of the American population is. They are slightly more likely to be found in rural areas and small towns, but not overwhelmingly so. And there are large numbers in the suburbs and large numbers in the cities. And of course that is especially if you look at African-American evangelicals. They are slightly less likely to have a college education, but not overwhelmingly so. About 40% have a college education. This is a group that is integrated professionally and educationally into mainstream America. It is not particularly different.

Looking at what they worry about, what they care about, we asked people in a sort of open-ended context, what are the concerns that you have? What are you worried about? And we have a range of different issues, from the economy to terrorism to moral values to security to the situation in Iraq. And not surprisingly, the top issue for evangelicals is moral values. But what’s interesting to me is that this is not dominant. If you look at all evangelicals, 34% say their number one concern is moral values. 27% are worried about the economy and jobs, 23% are worried about fighting terrorism, 14% are worried about education. This issue is not dominant in the way we might assume that it is. And when you dig down deep into the evangelical population, you see all the kinds of differences that emerge among Americans in general here as well. If you look at age differences, you’ll find that among younger evangelicals, education as an issue is almost as important to them as the state of moral values, which is true of the population at large. If you look at older women, who are among the most religious if not the most religious in the evangelical population, retirement is as important an issue to them as moral values. I’m not suggesting that for this group moral values [don’t] play a special role. But to suggest that it’s the only thing they care about would be wrong. And, in fact, when we go through a list of things that you might worry about — and the list ranges from the values your kids are learning to the loss of jobs to China — we find that while evangelicals are more likely to worry about the values their kids are learning [and] they’re more worried about the state of marriage, they’re almost as likely as other Americans to worry about economic issues and worry about job outsourcing and the deficit and the long-term solvency of Social Security. They have the same kinds of economic concerns that other Americans have, and arguably, they are slightly more downscale than other Americans, and so in some sense, these concerns are more intense. And when you look at lower-income evangelicals and evangelicals with lower levels of education, a lot of these economic issues are as equally important to them as these kinds of moral issues. I think it is important to mention this because their concerns are multidimensional. They are not one-dimensional.

There’s been a lot of attention paid to the role of evangelical elites in raising concerns about the treatment of religious minorities internationally. And we were interested in thinking about the evangelical view of the world and how America should be in the world. We asked a series of really interesting questions about what America’s role should be in the world. And what we found was that, along with other people who are conservative, questions of strength, the military, fighting the war on terrorism, prosecuting the war on Iraq, were the most important sort of things that America needed to be doing. At the bottom of the list was worrying about the rights of religious minorities and the rights of people more broadly and human rights in the world. And so it was interesting, because I think that there’s a disconnect between the way this issue gets covered at the elite level, in the White House, or [the way] regular evangelicals think about it, very much like other Republicans and conservatives, about the role of America in the world, and certainly less likely than, say, more liberal or moderate Protestants to care about taking care of the disadvantaged internationally, dealing with AIDS and the spread of disease and those kinds of issues.

Looking at themselves as a community, what’s not surprising is that they have very intense levels of religious practice and religious belief. But what was interesting [was] they were discerning about their own leadership. We asked questions about favorability of James Dobson, Pat Robertson, Jerry Falwell. From the outside there’s an assumption that any leader in the evangelical community is a potential spokesman for the community. But in fact, evangelicals have very mixed feelings about some of their leaders and in fact were fairly unfavorable toward Pat Robertson. Almost all of them know who Pat Robertson is; 79% know who he is. 34% feel favorably toward him, 23% unfavorable. That’s not an overwhelming number for Pat Robertson among evangelicals. If you look in contrast at someone like Franklin Graham, fewer people know him, only 50% could recognize who he is. But 37% feel warm toward him and only 7% [feel] unfavorable toward him. If you look at James Dobson, who’s slightly better known (58%), 44% feel warmly toward him, 6% cool. They are discerning about their own leadership, and we shouldn’t assume that anybody who’s an evangelical spokesman is well-liked by their own constituency.

There’s such a strong emphasis on proselytizing and evangelizing (and that was very clear in this survey — very, very intense numbers around the levels at which they proselytize and talk to people in their families and talk to friends and talk to co-workers), [but] not everybody in the evangelical community thinks that only evangelicals go to heaven. There’s actually a fair amount of — I don’t know if the right word is tolerance, again, that’s a very loaded word — but there’s a fair amount of openness to people who come from a different worldview in that sense. The question is, do you that only born-again Christians go to heaven? Only 48% of evangelicals say that’s true. Less than half [say] that’s true. If you look at African-American evangelicals, only 41% say that’s true. But overall, less than half say that only born-again Christians go to heaven.

We were looking to see is there any opening for Democrats with evangelical Christians. We’re in turbulent times with the war in Iraq, but also with the economy. This is a group that has pretty significant economic concerns. Is there a potential for economic populism to break through and sort of trump maybe the question of moral values when it comes to voting? In fact, we found that Bush has a very sizable majority, when it comes to evangelicals, which is pretty solid, and Kerry does not do very well at all among evangelicals. It seems that their status as a base group for Bush is solid and it’s hard to imagine it moving much. They think they have a fair amount of influence within the Bush administration and, by the way, so do non-evangelicals. Non-evangelicals also think that evangelicals have a fair amount of influence in the Bush administration. And I think they fairly accurately perceive they have a fair amount of influence within the Bush administration. The thing I looked for but couldn’t find was: Is there a crack? Is there an opening? For evangelicals who are Democrats (and there aren’t very many of them unless you look at African Americans), partisanship trumps religion. It’s interesting. They are very strongly for Kerry if they call themselves Democrats, as much as other people who are Democrats, and it trumps their religious beliefs. But they’re a pretty small group of people.