This is a very sophisticated survey. It has a lot of detail; it has a lot of nuance. I think it would be in everyone’s interest to look carefully through the materials that are being presented here because this is a rare look into a very important religious community. Oftentimes in polling, we tend to look at religion in a very general way, the same way we’d look in a general way at other demographic characteristics like education or income or occupation. And this is one of those rare opportunities. 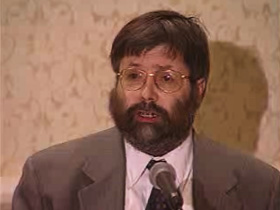 It’s been a long time since anybody has looked at the evangelical community in this much detail and with this much nuance. So I commend my colleagues for taking on this topic. In fact, you’d have to go among the pointy-headed crowd, myself included, among intellectuals, to get this degree of sophistication. And I think it comes at a very important time, when evangelicals have really become a prominent people in American politics and in American society at large.

It’s interesting, when your colleagues [in the media] from Europe call me — which they do from time to time — they have this impression that everybody in America is an evangelical Protestant, because that’s the image that they have because of the renewed prominence of this community.

Let me just hit upon what I see as a couple of highlights of the survey, picking up on what Bob [Abernethy] and Anna [Greenberg] have both talked about, but maybe looking at it from a little different point of view. One of the reasons that evangelicals are so important in American society today is because of their enormous energy. This is a community that is just extraordinarily active. Of course, many of us notice the relatively new activity in politics. But evangelicals are active in every other area. They’re active in the arts, they’re active in cultural things, they’re active in publishing and broadcasting and the news media. And then, of course, they’re very active in religious activities, which include a high level of volunteerism and participation in charitable and other types of parachurch activities. And the source of that energy is this powerful tension that Bob alluded to earlier. This is a group of people that in many ways feel very comfortable with American society; in many ways they feel like they are at the center of American society. But in other ways, they feel that they are still a people apart — that they really have to struggle to get their message out, that they are not respected the way that they ought to be respected.

We see that in the two questions that Bob highlighted, with really three quarters of white evangelicals thinking that they’re mainstream, but then three quarters believing that they have to struggle to get their message out. And you also see it in some of the things that Anna mentioned. They believe that they have influence with political leaders, with the Bush administration and in Congress. On the other hand, they also feel that they’re looked down upon, [that] there are certain institutions that really dislike them. And one of the findings, and I hope this doesn’t come as a big shock to all of you here, but they really don’t like the news media too much. They really feel that the news media is hostile to them. It’s not just that [the media] has a different point of view, but [it] is actually hostile to them, and I think that’s part of that.

Well, where does this tension come from? Well, I think it comes from two things. One is that this is a group with very distinctive religious beliefs and practices. When we look at survey data on religious behavior and we look at survey data on religious beliefs, we always have to be a little bit skeptical, because people tend to put the best face on their beliefs and practices. But even if you apply an appropriate discount to the self-report, these are deeply religious people. I mean, they really do behave and believe in distinctive ways, compared to the American public as a whole. And one part of that distinctiveness in belief and behavior is they build very strong communities. These people are very involved in their churches and in the organizations connected to their churches. And this is something of an exception in American society. I’m sure, as many of you know, we’ve had in the last several decades a dissolution of many communities, a decline in what scholars call social capital and sociability generally. Well, here’s a community that’s a countertrend, that builds these very strong communities and organizations. And they’re able to, in many respects, lead a different kind of life than many Americans do. So here we have a distinctive community that is nonetheless enmeshed in this broader, diverse, pluralistic society. And there’s just a lot of tension between those two things.

Evangelicals, because of their beliefs and their distinctive communities, do tend to put stress on traditional morality. As Anna indicated, perhaps not as strongly as the popular images, but they are distinct in that regard. They pay a lot of attention to sexual behavior. They’re very interested in families and children. They’re very worried about the institutions that impact families and children — schools, the news media, entertainment, other forms of education. And while those are not the only set of concerns this community has, they’re a particularly important set of concerns because of how they link the evangelical community to politics. So it’s not that every evangelical wakes up every morning wanting to amend the Constitution to prevent gay marriages, but that these moral issues play a very important role in the way they perceive politics.

If we could remove from evangelicals, or from American politics today, these moral issues, then this community would not be a strong constituency of the Republican Party. It would be divided up. There’d be many more Democrats. There’d still be quite a few Republicans, by the way, because it’s very diverse community. But at this particular time, it’s the moral issues that tie this community to partisan politics. And that’s why it’s so central to our discussions of politics. But if you look on a whole range of other issues, as Anna indicated, there’s a lot of diversity there. Someone like John Kerry might actually appeal to a fair number of evangelicals on some of these other economic and social issues, if the moral issues were subdued or were removed from the table.

Evangelicals are also deeply engaged in society in other ways than politics. The survey shows they’re very involved in volunteerism. They are very involved in charitable activities. They really see their role in society as not just doing politics and not just spreading the word — and they’re very interested in evangelism — but in participating in society in other ways as well. So this is a group that behaves in an extraordinary way in lots of different areas.

How would we sum this up? Well, there’s an old phrase in Christianity that I’m sure many of you are familiar with, and that is that Christians should be “in the world but not of the world.” In many ways that phrase describes the tension we’re talking about with the evangelical community. These are folks that perceive themselves to be very much in the modern world. And they are, in fact, very much in the modern world. But they do not see themselves as being “of” this world, but having other distinctive values and aspirations that set them at odds with the society that they belong to.