BOB ABERNETHY, anchor: It’s impossible to measure religious experience, but it is possible to ask people about their beliefs and practices, and we did that in our national survey conducted by Greenberg Quinlan Rosner Research.

At a press conference this week, Anna Greenberg, who directed the poll, announced the results. She is a specialist on religion and politics, and the role of churches in public life.

Joining her was political scientist John Green, also an expert on religion and public life, and director of the Ray C. Bliss Institute of Applied Politics at the University of Akron in Ohio.

Afterwards, I asked what survey findings surprised them.

ANNA GREENBERG (Vice President, Greenberg Quinlan Rosner Research Inc.): I think what surprised me the most was how part of the mainstream evangelicals are. They watch the same amount of television, they live in the same places, they go to churches of the same size. 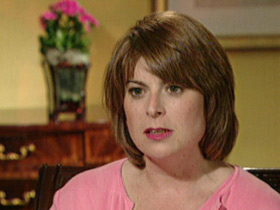 The biggest difference is their beliefs and their practices. They have very strong and conservative religious beliefs, and they put them into practice at a level of great intensity, compared to anybody else.

Professor JOHN GREEN (Director, Ray C. Bliss Institute of Applied Politics, University of Akron): The thing that surprised me the most was the stark evidence of the ambivalent feelings that evangelicals have toward American society, with three quarters saying that they feel they’re part of the American mainstream and an equal number, three quarters, believing that they have to fight hard to get their point of view across. But, they also feel that the news media is very hostile to them. And about half of them feel that other Americans look down on them. So this is a group that feels in some ways comfortable with American society, but in other respects still estranged and still apart.

ABERNETHY: I think the thing that surprised me the most was how not only evangelicals but everybody else felt the country is on the wrong track when it comes to moral values.

Ms. GREENBERG: That’s right. When you ask evangelicals, “What’s the most important thing that concerns you?” moral values is their number-one issue. Though I should say, other issues — economic issues — are important to them as well. When you ask them, “What’s your biggest worry?” the strongest thing, the thing that comes out, is children not learning the right values. And in fact, all Americans feel that way. The difference between all Americans and evangelicals is evangelicals act upon these concerns. In other words, they have these concerns about their kids’ values, and that influences what kind of television they expose them to. Other Americans aren’t as likely to say that their view of the kind of, moral sort of direction of the country has the same kind of impact on their behavior.

Prof. GREEN: Part of what may be going on in that question is that there is a great disagreement in the United States about moral values — some people wanting to emphasize family and children and sexual issues, other people wanting to talk about war and peace, social justice, the regulation of the marketplace. And Americans, I think, are revealing that those are very major conflicts today.

ABERNETHY: John, what does this new survey have to say about evangelicals and politics in 2004?

Prof. GREEN: Well, you know, the last couple of years white evangelicals have been seen as a strong Republican constituency. They voted very heavily for George Bush in 2000, and our survey suggests that that support for Bush is maintained. For instance, we found that 71 percent of white evangelicals said they would vote for Bush over Kerry if the election were held today. So these are clearly a conservative or Republican group. But you know, they are not monolithically so. About 23 percent said they would vote for Kerry, and it’s possible that, under [certain] circumstances, the Democrats might get even a few more votes. 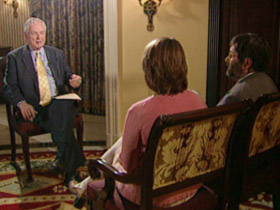 Prof. GREEN: If the social issues come up in the campaign in a way that allows the economic and foreign policy concerns of evangelicals to be relevant to their votes.

Ms. GREENBERG: They are very interested in being strong militarily, very strong on the war on terrorism, very strong on Iraq. And that is, I think, as set of positions that probably favors Bush.

ABERNETHY: Anna, are there signs that evangelicals are becoming what you might call more tolerant?

Ms. GREENBERG: I think there are. We would expect, given the intense religious and theological beliefs that evangelicals have, that they would have a pretty rigid, you know, view about who is saved and who is not saved. It turns out only about half, even less than half, say we have to be born again in order to be saved; [that] suggests, you know, openness to other Christians and openness to other people. If you look at issues, it also looks like they are becoming more tolerant. We asked this question about gay marriage. Overwhelmingly, 82 percent say they are against gay marriage. But when you ask them, “Do we need a constitutional amendment?” only about half of them say we need an amendment. The other half says state laws are sufficient.

I think there was some sense, probably on the right, that this would be sort of a home run with this base group for the Republican Party. But, in fact, you know, a majority think that, you know, the laws are okay.

When we asked them, “Would you vote for a candidate who held a different position than you on the question of gay marriage?” only about 47 percent said, “I would vote against that candidate if they had a different view than me.” The rest were okay. So it’s not even a litmus test for them. So I’m not sure if they’re becoming more open or tolerant, per se, but they certainly have nuanced views about these issues.

ABERNETHY: And what about evangelizing? Do evangelicals think they must try to convert others, or is it enough to talk about one’s faith, to share it?

Ms. GREENBERG: It doesn’t have to be a deliberate attempt to convert. It can just be spreading the “good news,” talking with friends, talking with family. About 75 percent say on a weekly basis they just talk about these issues.