BOB ABERNETHY, anchor (March 18, 2005): Today, a look at one of the great phenomena of religion in America — the prominence and the paradox of white Protestant evangelicals. They make up about a quarter of the population. Their political influence is strong. Their churches seem to be thriving. And yet, many evangelicals say they feel misunderstood by the wider culture — under siege — as if they were an estranged minority.

Judy Valente has a special report on who evangelicals are, how they worship and what they believe.

UNIDENTIFIED PASTOR: Would you come and join me here at the altar and let’s pray together.

JUDY VALENTE: Listen to the words of born-again evangelical Protestants on their personal relationship with Jesus Christ.

NOEL TURNER (Dauphin Way Baptist Church, Mobile, Alabama): The Lord saved me when I was nine, and that has transformed me.

JUNE FORBES (Vineyard Christian Fellowship Church, Bloomington, Illinois): It gives me the courage to go on day to day because I know that I do have a redeemer.

MARGARET TURNER (Dauphin Way Baptist Church): I don’t feel like my life would be worth much without him. 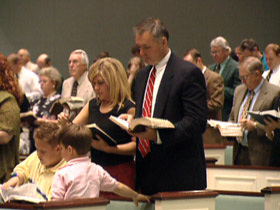 UNIDENTIFIED PASTOR: Dear Jesus, we remember what you have done for us.

VALENTE: The core belief of evangelicals is that they are saved because Jesus died for their sins. They believe it’s their duty to share their faith with everyone. They try to live according to the commands of Scripture.

A variety of factors have galvanized American evangelicals in recent decades, among them the election to the presidency of Jimmy Carter, a born-again Christian, and the polarizing debate over abortion on demand. Also, evangelicals have proved adept at using radio and television to spread their message.

The majority of evangelicals are white, and most of them are politically conservative. African Americans make up about one fifth of the total. Most black Protestants share many of the same religious practices as white evangelicals, but they are much more liberal on a number of social and political issues.

Hispanics make up a smaller percentage. Many attend Pentecostal churches, heavy on emotion and faith healing. They are not as conservative as white evangelicals, nor are they as liberal on some issues as African Americans.

Evangelicals are a little more Southern, rural, and older than Americans as a whole. But what distinguishes them most is the intensity of their beliefs, and how actively they try to live them out. 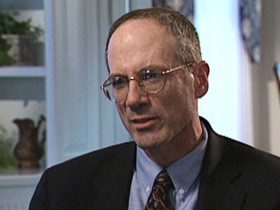 Dr. MARK NOLL (Historian and Professor, Wheaton College): Evangelicals often focus upon their spiritual lives and on the good they can do in a community.

VALENTE: Mark Noll is a historian and professor of Christian thought at a leading evangelical liberal arts institution, Wheaton College in Illinois. According to Noll, evangelicals are still looked down on by some people.

Dr. NOLL: Often, to those who don’t appreciate evangelicals, they’re seen as rednecks, as crypto-fundamentalists, as people without education.

VALENTE: But in fact, nearly half of all evangelicals say they have some college education or a college degree. Increasingly, they see themselves as part of the mainstream.

Margaret Turner is a court reporter; her husband, Noel, a mortgage company officer. Theirs is a traditional congregation: the Dauphin Way Baptist Church in Mobile, Alabama.

VALENTE: But to a greater extent than most Americans, evangelicals say they are concerned about moral values, including sex and violence in the media. 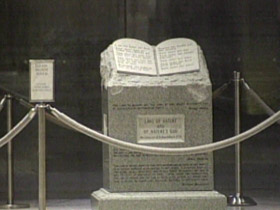 And they worry about the secularization of society. For example, Dauphin Way Baptist Church was very active in trying to keep a monument depicting the Ten Commandments on display at the Alabama Supreme Court building. The specific issues that concern evangelicals: abortion rights, prayer in schools, and same-sex marriage. And when it comes to personal moral behavior:

Ms. TURNER: They might go out for a drink after work, and we would not go.

Ms. TURNER: Right, dirty jokes, we might walk away from that.

VALENTE: Margaret goes to Bible study on Thursdays, and again on Sunday mornings, with her husband.

Mr. TURNER: We view the Bible as the inspired word of God.

Ms. TURNER: If we want answers, that’s where we get it. We can go to the Bible, and we can find our answers there.

VALENTE (To Ms. Turner): The story of creation, the story of Adam and Eve, how the world was created — literally true?

Dr. NOLL: I think evangelicals may still feel marginalized and as minority members in a hostile culture.

VALENTE: Like 90 percent of evangelicals, the Turners describe themselves as born again. 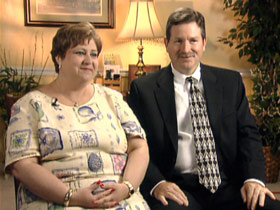 Ms. TURNER: If you’re non-Christian, then you’re not saved.

VALENTE: But according to our survey, less than half of evangelicals feel it is necessary to be a born-again Christian to get to heaven — perhaps an indication of a more accepting attitude among some evangelicals toward other believers.

VALENTE: Bible study begins early in life at the Oak Hills Church in San Antonio, Texas. The church is trying to give its youngest members a head start.

At Oak Hills, as in other megachurches, a person’s denomination is not considered important. Overall, about one quarter of evangelicals say they are nondenominational. And a third of them say they have converted to evangelicalism.

Gabriela Gomez, for example. She came to the U.S. from Mexico as a young girl. She had been raised Catholic. Now she teaches one of the Sunday school classes at Oak Hills.

GABRIELA GOMEZ (Sunday School Teacher, Oak Hills Church, San Antonio, Texas): The core values are in the Bible. Your children are involved in Bible study and Bible lessons, and I think that’s very important, for our children to be growing with spiritual values.

VALENTE: Gomez opposes abortion and same-sex marriage. But as an immigrant, she finds issues of poverty and education just as important. 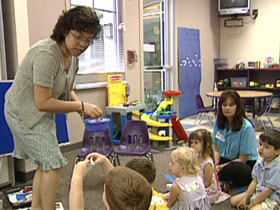 Ms. GOMEZ: My kids have a better life than the life I had when I was growing up. But I also want them to see that life is not just here at home, that there’s children that don’t have homes, that lack going to school, that lack food.

VALENTE: Her pastor is Max Lucado, who is also a best-selling inspirational author.

Dr. NOLL: People come to the church because of its skillful presentation of the Christian message and its efficient organization of Christian worship and Christian practice.

VALENTE: Part of the broad appeal of Oak Hills has to do with diversity of worship styles. An a cappella service takes place in the main sanctuary, while at the same time other congregants, including Randy Boggs, listen to bluegrass at a service down the hall.

RANDY BOGGS (Congregant, Oak Hills Church): We are evangelicals and we are, I believe, much wider and deeper than some stereotypes would indicate. We represent a broad spectrum of political views.

The one thing we do have in common is that outlandish, crazy story about Christ on the cross — the Passion of Christ.

We kind of see ourselves as this pipeline, with God at one end, the world at the other. And we just want to be this conduit of his love. Sometimes in trying to do that, we’re misunderstood.

VALENTE: For Boggs — unlike most evangelicals — issues of immigration and the environment are at least as important as abortion and same-sex marriage. 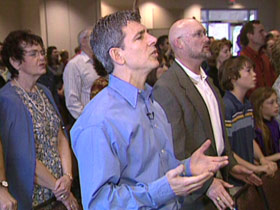 Mr. BOGGS: I wince a little when I hear these harsh judgments. The Bible says we are all sinners. This is an area where I think we will grow and develop and be able to show compassion for every human being, every human being, and at the same time hold up Christ as our model.

VALENTE: One reason evangelical megachurches have succeeded is their welcoming, contemporary worship style. But some evangelical leaders wonder whether, in trying to be popular, they’re watering down their doctrine. Mark Noll:

Dr. NOLL: If the end product is to be wishy-washy and unsettled, without an anchor, tossed about on every wind of contemporary culture, then of course that would be a negative situation. If something genuine and filled with integrity from the Christian tradition is maintained, then this is probably a good thing, to reach out more broadly with that kind of message.

VALENTE: June Forbes calls herself a “prayer warrior.” At six a.m. every day of the week, she arrives at the Vineyard Christian Fellowship Church in the central Illinois town of Bloomington. For an hour, along with anyone else who shows up, she prays.

Ms. FORBES: It’s very important to me because we really focus in on many issues of the day, our nation, and our president.

VALENTE: And during this time she prays that the gospel will be spread.

Ms. FORBES: It’s very important to me to reach the lost. It is so important. That’s why I go to prayer every morning. That’s why I cry out to the Lord for people that don’t know Jesus.

When you believe the Bible, that there is a hell and eternal damnation, you do not want to see one precious soul go to hell, because eternity is forever.

VALENTE: The Vineyard churches sprang up in Southern California 20 years ago. There are now about 600 of them around the country. This one is small, perhaps about 150 members. Informality is the key, and so is an emphasis on the Holy Spirit. They want their message to be a universal one — hence, the prominence of a world map. June Forbes came here after 50 years in a mainline Protestant church, where she says something was missing. 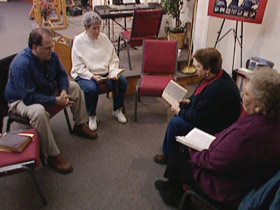 Ms. FORBES: You put on your very best clothes, you went, and you smiled and you were nice to everybody because everybody was nice to you. But you might truly have had a real problem in your heart, but you just didn’t feel free to share it with other people.

Reverend DAVID BIELBY (Pastor, Vineyard Christian Fellowship Church): The idea with the Vineyard movement is to take away the barriers between real Christianity and people where they live today. We’re trying to take authentic Christianity and put it into the culture of America.

Lord, for those who have been weak lately, they’ve been struggling physically, I ask you to restore them.

Always, however, when you stress personal experience, the risk is run that you, rather than God, will become the center of religion.

VALENTE: It is the personal experience with Jesus that has meant the most to June Forbes. She describes the pain of losing her husband three years ago.

Ms. FORBES: I thought I couldn’t stand it. I would just cry out to the Lord – “I can’t take this pain any longer, you’ve just got to come and help me walk through this.” And he did. The loneliness was sometimes overwhelming. He held me so close some nights, I can’t tell you how sweet it was.

Dr. NOLL: To be a Christian of any sort, and certainly to be an evangelical Christian, is to remain confident in the work of God and Jesus Christ. So long as evangelicals are secure in that confidence, then whatever happens, they will be secure in the future.

VALENTE: The evangelicals we met seemed convinced of the rightness of their beliefs and secure in their behavior, and with a strong sense of belonging — often instilled at an early age, as when the kids at Oak Hills sing to “The One True God.”

VALENTE: For RELIGION & ETHICS NEWSWEEKLY, this is Judy Valente reporting.