BOB ABERNETHY, anchor: In the aftermath of the Hamas victory in the Palestinian elections, big questions piled up this week about the prospects for peace and democracy in the Middle East. Kim Lawton reports.

KIM LAWTON: During his State of the Union address Tuesday (January 31), President Bush was clear about U.S. policy toward Hamas. 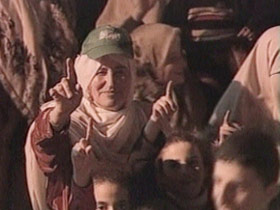 LAWTON: U.S. and European officials debated the wisdom of cutting off aid to the Palestinians unless Hamas meets those conditions. American Muslim leaders spoke out against that, urging that the new government be given a chance to live up to international norms. But there were growing calls to let Hamas feel the consequences of its positions.

Canon Andrew White is a prominent Anglican priest who, despite suffering from multiple sclerosis, works for reconciliation in the Middle East — what he calls the most dangerous parish in the world. He says if aid is cut off, alternative funding sources must be found for poor Palestinians.

Canon ANDREW WHITE (Foundation for Reconciliation in the Middle East): There’s a very real concern and fear about the effect that this withdrawal of funding will have on some of the welfare institutions, such as the clinics and the hospitals and even the schools. How will these be run without funding? 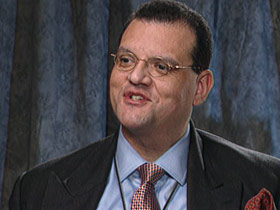 LAWTON: White says the Hamas victory, and the recent elections in Iran and Iraq, all show that Western-style democracy cannot be identically replicated in the Middle East. He says Western politicians too often underestimate the power of religion in local politics.

LAWTON: One increasingly influential voice of moderate Islam is Jordan’s King Abdullah II. In an address to evangelical leaders Thursday (February 2), he gave a strong and warmly received condemnation of Islamic extremism.

King ABDULLAH II: The violence unleashed by terrorist groups and the few who follow them stems from hatred. They do not preach the Islam of the Qur’an or the Prophet Muhammad, peace and blessings be upon him. Theirs is a repugnant political ideology which violates the principles and statutes of traditional Islamic law. 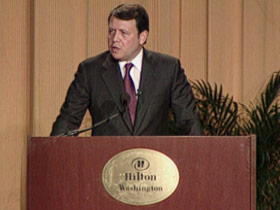 LAWTON: He urged evangelicals and Muslims to put aside their differences and join forces to fight extremism.

King ABDULLAH: In every generation, people of faith are tested. In our generation, the greatest challenge comes from violent extremists who seek to divide and conquer. Extremism is a political movement under religious cover. Its adherents want nothing more than to pit us against each other, denying all that we have in common.

LAWTON: Canon White agrees that religious involvement is key to keeping the peace process moving ahead.

Canon WHITE: If the issue of religion is a problem — and it certainly is — we’ve got to also realize that it’s part of the cure.

LAWTON: Religious leaders from here in the U.S. and across the world have called for a special time of prayer for the Middle East. They say the next few weeks will be crucial as Hamas forms its new government and the rest of the world forms its response.