BOB ABERNETHY, anchor: Anyone attending church these days can see that there are usually a lot more women in church than men. Judy Valente has a story today about attempts underway in some churches to bring back the missing men -- encouragement to be better husbands and fathers and friends, but also sometimes by emphasizing qualities the Gospels do not.

JUDY VALENTE: A darkened room. On the screen, a film about Scottish warriors. A movie theater? No. Try Sunday worship. This is the Grove Community Church in Peoria, Illinois, a self-described "men's church." Mark Doebler, the bongo-playing pastor, says Christian men have been "neutered." 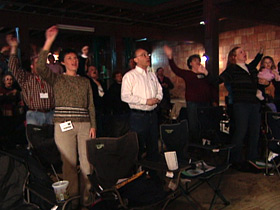 Rev. DOEBLER: We're not saying that we shouldn't be gentle and humble and serve people. But there's a flip side to that, which says we have to be aggressive in the world when it's appropriate. We are warriors.

VALENTE: The congregation meets in what used to be a nightclub. The ambience is decidedly masculine.

Rev. DOEBLER: So guys walk in and they feel like, "Okay, this is a place that understands men." Most women are okay in a guy's environment.

VALENTE: Doebler calls himself not the men's pastor but their coach.

VALENTE: And at the end of the service, the men go into a huddle. 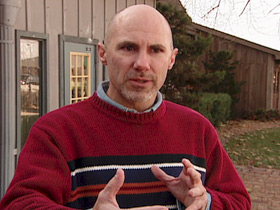 Rev. DOEBLER: There's a very spiritual component to that, and it is equipping and challenging guys to be spiritual leaders in their homes.

VALENTE: What Doebler is doing could not be done in most churches. This is his approach to making Christianity more attractive to males. There seems to be no single reason why many men feel uncomfortable in church. Different men give different reasons. If there's one common thread, it might be that men perceive church as too feminine -- a "woman thing."

DAVID MURROW (Author, WHY MEN HATE GOING TO CHURCH): There is a reputation among men that church is something for women, weirdoes, and wimps.

Mr. MURROW: Over the years there's been a gradual feminization of a lot of our practices. There's been an emphasis on relationships, nurturing, close-knit communities. Men are into challenge, adventure. Men, especially young men, like conflict and change, and these are the sorts of things that are downplayed in church today.

VALENTE: The early Christian church was dominated by men. Depending on whom you talk to, men began slipping away from church as long ago as the Middle Ages. In other religions, men play a prominent, even dominant role. Christianity has been described as a case of male generals leading an army of women.

Reverend JACK ELWOOD (Pastor, Burke Community Church): Women, by default of men's participation and leadership, have been forced into leadership, and they have simply created an environment that is friendly to them, and they don't understand why men don't want to draw into that.

(Song playing in background): "Off we go, into the wild blue yonder..." 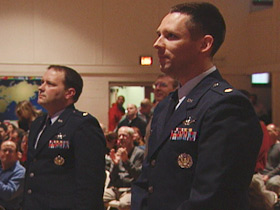 VALENTE: This is Jack Elwood's congregation in the Virginia suburbs of Washington. On Veterans Day it went a step further than most churches in honoring the military. There is a large military component here anyway, but Elwood makes a serious effort to reach out to all men. Things like this, as well as a fast-moving liturgy and short, focused sermons by Pastor Elwood send the message that men are important here.

(Song playing in background): "From the halls of Montezuma"

Rev. ELWOOD: You can tweak a worship service to have more masculine vocabulary. For example, you can focus on challenge rather than comfort.

(Scene of woman dancing on stage)

VALENTE: But this, too, is part of Elwood's service. Churches like Burke Community and the Grove, both nondenominational, insist that by focusing on men they are not trying to exclude or diminish women. They say they want to create a different type of spiritual partnership between men and women.

Rev. ELWOOD: We're not making our services to appeal like a lodge meeting for men or a locker room gathering where only men are going to feel comfortable. We want men and women to both connect with Christ in our services. The challenge is that while many women can do masculine, most men can't do feminine.

TEAM LEADER (praying): "Father, as we go through this day, remind us of who we are as your sons."

VALENTE: It is 6 a.m. on a Tuesday. Twice a week, large groups of men gather at Burke Community for what is called "men's fraternity." These are nationwide programs that combine biblical teaching with small group interaction -- among men. 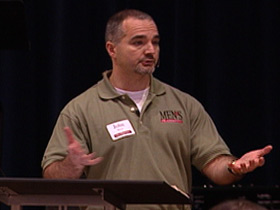 JOHN MEYER (Burke Community Church, speaking to Men's Fraternity group): Proverbs 27:17: "As iron sharpens iron, so one man sharpens another." If you don't have that memorized, memorize it today on the way to work.

VALENTE: The idea behind Men's Fraternity is to offer them adventure, the adventure of living life way God intended them to.

Mr. MEYER (speaking to Men's Fraternity group): If you don't have a guy that can be your honest mirror that you can sit before, and you can tell them what is going on in your life to any degree, then you are at risk.

Rev. ELWOOD: This is a way to ground men in some biblical truth but also in a relational context where they develop other brothers, where they live their life in a community in relationship with other men who share their struggles and face their fears and hopefully address their issues and help them move from simply being a male to being a man.

VALENTE: When the laughter has died down, it's time for the message of the day, delivered in man-to-man fashion.

Mr. MEYER (speaking to Men's Fraternity group): We often, as we go through our careers and we're kind of shuffled through the system, we tend to lose a bit of sense of control over our lives, lose a sense of power. And opportunities may arise where you can feel a new sense of control, a new sense of power. And often we may look for that in the arms of another woman not our wife. You have got to rely on your faith. Psalm 119 says, how can a young man keep his way pure? By keeping it according to thy word.

VALENTE: Afterwards, the men talk among themselves. 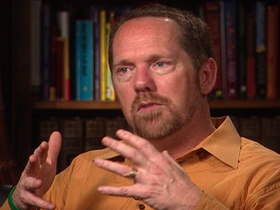 Rev. ELWOOD (speaking to Men's Fraternity Group): That transparency with your spouse -- that you're really honest there, then you've got it.

I tell the guys when we're in that setting that I would rather spend time with them in that setting than preaching in church on Sunday. They're the most important thing I do every week, helping these men move toward authentic manhood. It's given a flavor to our church that says men are engaged in not only growing in Christ but in leading and serving their families.

VALENTE: At the end of the session, a final warning about sexual temptation.

All right, all for one?

MEN'S FRATERNITY GROUP (in unison): One for all!

Rev. ELWOOD: Let's go get them.

JOHN ANDREWS: We talked about sexual purity. We talked about integrity -- the things that every man struggles with. When you can do that in a crowd with people you trust, you tend to realize that it's not just you that has the battle. 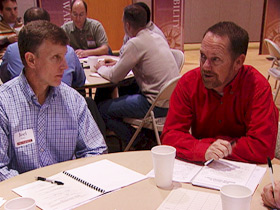 JOSH CHAPMAN: I can come to this, and it's just as much church, if not more so, than coming and sitting in a chair and hearing a message, because I'm actually getting fed with my brothers and their experiences.

Mr. ANDREWS: It's a time of intimacy with men that you don't have in any other setting. When I see them at church on Sunday morning, it's even that much better because of the intimacy we've shared on Tuesday morning.

BRAD HIBBS: It is so vitally important that men step up as leaders, as husbands, as fathers, and involved in the church itself in leadership positions.

Mr. MURROW: The real challenge here is not calling men back to the church. It's calling churches back to men. We need to create the types of experiences where men can come alive. We've got to figure it out in the Christian church, or the church is going to continue to decline in attendance in America.

VALENTE: Murrow sees signs of hope. Some mainline churches are starting to reassess their practices and are asking, where have the men gone?

It’s not hard to tell that these days, there are more women attending church services men. Some churches are now attempting to bring back the missing men through programs that encourage them to be better husbands, fathers and friends. The meetings also sometimes emphasize more masculine qualities that the Gospels do not.