PHIL JONES: What was once tomato-growing farmland in southwest Florida has grown into something dramatically different. A 100 foot-tall, $24 million house of worship has risen, the centerpiece for a new town with a population goal of 25,000 and a new university, Ave Maria -- the dream of a very rich man, Tom Monaghan, who wants to produce more than diplomas.

TOM MONAGHAN (Chancellor, Ave Maria University): We don't want to be a diploma factory. We want to be a saint factory.

JONES: Monaghan's "saint factory" offers a rigorous liberal arts curriculum, including a doctoral program in theology. Its goal: to create the next generation of Catholic leaders. Enrollment now is fewer than 500. He wants 5,000 in 20 years.

Who is Tom Monaghan? Well, he's as close to being a self-made man as any mortal can be. His father was a truck driver who died before Monaghan was five. Monaghan ended up in a series of foster homes and an orphanage. He dreamed of becoming a priest one day, or a ballplayer, or an architect. Instead, he ended up selling pizzas and became a billionaire. 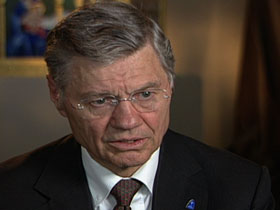 JONES: For a poor boy who lived on a farm and went to school with manure on his shoes, life would get better -- much better. Monaghan turned one pizza shop in Michigan into the nationwide Domino's brand with 5,000 stores. He says he took pride in having his own jet, helicopter, luxury cars, and big house. Then one day he saw through his pride.

Mr. MONAGHAN: Pride is a source of all sins, and I figured I must be the biggest sinner in the world because I certainly got a lot of pride and a lot of ego.

JONES: Monaghan is no longer on anyone's list of richest men. In the past decade he says he's committed at least $400 million to Catholic higher education. Monaghan gives his own money and raises more, claiming to have more than 40,000 donors, and at fundraisers he talks about his "big" vision.

Mr. MONAGHAN (speaking at fundraiser): So fasten your seat belts. I don't want anybody to get whiplash here. So we're going to go fast forward to 2077. We'll probably have over 2,500 priests -- and not just ordinary priests. Good priests. A lot of those priests are going to become bishops. We're going to have about 2,000 sisters that come out of Ave Maria. And how about this one -- 45,000 straight Catholic marriages!

JONES: There are three Masses a day on campus -- five on Sundays. Underage drinking is forbidden. So is premarital sex. Students live in single-sex dormitories.

BILL WATERS (Freshman, Ave Maria University): Everyone thinks oh, it's Ave Maria, you know, it's real closed. It's like a bubble, you know, we don't do anything, everybody's all home schooled. There's normal people here. 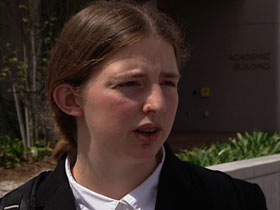 LINA WILLIAMS (Sophomore, Ave Maria University): We have the foundation in faith here that I very much find important for me in my life. It's good to come here and find the real truth, get grounded in that and then go out and see what the world has to say.

JONES: But what about academic freedom? Research, learning, teaching, free inquiry -- no matter where it leads? Ave Maria's mission statement says it is to be "an institution of Catholic higher education that will be faithful to the Magisterium" -- the magisterium being the teaching authority of the Church, the bishops and ultimately the pope. But it's not clear who has final authority over what is taught -- the faculty, the local bishop, or Tom Monaghan?

Mr. MONAGHAN: The bishop has the final say on things to do with the liturgy and with the theology that's taught here and the spiritual leadership of our students, of our faculty, and of our staff. He doesn't have responsibility for the academics.

JONES: It remains to be seen just what academic freedom will mean at Ave Maria. The relationship between the university and the local bishop has been an uneasy one. For months Mass could not be said in this house of worship because Bishop Frank Dewayne had not consecrated it as a church. He finally came this spring, dedicating it as a "quasi-parish" where the sacraments can be performed, but not as a full parish with a pastor.

Bishop FRANK DEWAYNE (speaking at press conference): There were, I think, surprises along the way for the officials of the university when I said, you know, the Church has to do it this way.

JONES (during press conference): Who has the authority over this church right now? Does the church? Mr. Monaghan? I mean, who is in charge?

JONES: In the town of Ave Maria there are Catholic schools for kindergarten through high school. Non-Catholic public schools are coming. Some stores are open, but the sluggish economy has caused delays. Although there's not a pharmacy yet, there had been controversy when Monaghan said the town drug store would not be allowed to sell contraceptives. He's now backed away from that.

Mr. MONAGHAN: I never saw this as an exclusively Catholic town. I wanted, to the extent I could, to make it family-oriented -- no massage parlors, no adult bookstores, pornography, or things like that, that would be in my mind anti-family.

JONES: The housing bust has slowed residential development; only a few hundred homes have been built. The town's private developer insists it will be independent of both the Church and Tom Monaghan. 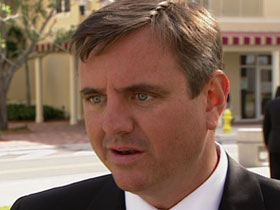 BLAKE GABLE (Vice President, Barron Collier Company): The community will be whatever the residents and the people who live here determine that they want for their community. I mean that's not something -- I can't impose my views on 25,000 people.

JONES: Jeanne Rush, who has opened a women's fashion boutique, says she's not been told what she can or can't sell.

JEANNE RUSH (Boutique Owner): I have short shorts. I have tank tops. I have sheer tops. We're all happy people enjoying the fruits of what Tom Monaghan inspired us to do in our lives.

JONES: Monaghan plans to move the Ave Maria Law School, now in Michigan, to the Florida campus. But some faculty members have taken Monaghan to court, alleging he reneged on a promise never to relocate. The university is awaiting accreditation, and the bishop has yet to declare it a Catholic university. Observers say Ave Maria's biggest challenge will come when Monaghan, who is 71, passes on -- or runs out of money.

RICHARD YANIKOSKI (Association of Catholic Colleges and Universities): At that point the question will be, is it attracting enough students? Is it financially capable of succession once Tom Monaghan passes from the scene? Is it going to be able to attract the quality of faculty over the long term, and in his particular model will the surrounding community that he has developed retain the character that it has at the time that it's first inhabited?

JONES: A recent survey of U.S. Catholics found that no more than 12 percent support so-called hard core, traditional, conservative Catholicism. But that's still a lot of Catholics, and many of them, like Tom Monaghan, are committed.

Mr. MONAGHAN: I can't think of anything more important that I could do with my resources, with the experience that God gave me and the 38 years of fairly intensive business experience -- to use it for something that's a lot more important than selling pizzas or making money.

JONES: Monaghan says that, for him, the most important thing in life has always been to be a good Catholic.

Mr. MONAGHAN: I don't want any legacy. I don't even think about that. I just want to get a small air-conditioning unit when I get into purgatory -- if I get there.

JONES: Monaghan describes his personal story as rags to riches to rags. The question yet to be answered: will Ave Maria eventually turn out to be the Promised Land he dreams of?

Tom Monaghan developed a new town, complete with its own massive house of worship and university, out of farmland in southwest Florida. He’s hoping that the town, and the university, will produce more than diplomas.