DAVID BECKMANN (President, Bread for the World): Thank you.

ABERNETHY: Bring us up to date, how many hungry people are there in the United States?

BECKMANN: It’s now 1 in 7 Americans who lives in a household that runs out of food.

ABERNETHY: Runs out of food what? Each month or?

BECKMANN: The typical pattern is the last 2 or 3 days of the month, people run out of food. So the kids may not eat for the last couple days, the mom may not eat for 4 days, it’s 1 in 4 children under the age of 5 who lives in one of those households and that kind of moderate under nutrition does permanent damage to children.

ABERNETHY: Now the supercommittee in Congress failed this week to come up with any plan about the long term control of the deficit. What does that mean for you and the people who are trying to fight hunger? There was to be an across the board cut that was gonna kick in if there was this failure. Is it going to kick in and if so what does that mean for hungry people? 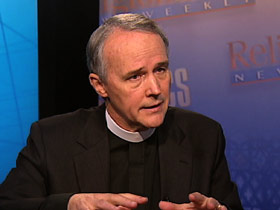 BECKMANN: Well, Bread for the World and other faith groups have been fighting for a circle of protection around funding for hungry and poor people because we can reduce deficit spending without making hungry people hungrier. And we were able to secure in the Budget Control Act that established the super committee and these automatic cuts a provision that will exempt some of the low income programs from cuts if those automatic cuts go into effect. So I would have liked to see the super committee reach a deal but the automatic cuts aren’t necessarily a disaster for poor people.

ABERNETHY: Because of the exemption?

BECKMANN: Yeah, and because people of faith pushed for it.

ABERNETHY: What about overseas? What’s going on there with American food aid?

BECKMANN: Well we were terrified earlier this year because the House of Representatives voted on a deep cut in food aid. Their cut would have thrown 14 million of the world’s most desperate people off food aid rations this year. So we really sounded an alarm about that, we talked to Mr. Boehner’s office, we talked to the President himself and in the final bill which passed this week they backed away from that really disastrous cut for hungry people.

ABERNETHY: A few weeks ago we heard that there were 7 billion people on Earth and the forecast was this would be going up to 9 billion by 2050. Can all those people be fed?

BECKMANN: Well I think we need to curtail population growth, but those people can be fed, and the key is an expansion of the productivity of poor farmers in poor countries. They can grow more to feed their own families, to raise their incomes. That’s where the food will come from for poor countries.

ABERNETHY: You mean rather than have it grown here and shipped someplace else?

BECKMANN: I think expanding demand for food will also be good for US agriculture but the bulk of the supply needs to come from the expansion of poor country, poor farmer agriculture.

ABERNETHY: And this week you came out with a proposal to change the system between the government and farmers in this country. What do you want to do?

BECKMANN: Well, we think it’s possible to develop a system that would be better for farmers especially small medium scale farms, fruit and vegetable growers, better for hungry people, better for a healthy food supply and that would cost the government less money. So this is an area where we want to support cuts but we don’t want the cuts to come from the nutrition assistance to poor people that’s included in the farm bill. On all these things basically we have to create the political will to overcome hunger. When we’ve had that political will to reduce poverty we’ve been able to do it in our country, and that’s what we need to mobilize now.

ABERNETHY: If all the federal aid for hunger, to prevent hunger, went away, could private charities pick up the slack?

BECKMANN: No, absolutely not. People think that but in fact all the food that we collect from all the churches and synagogues in the country, all the food banks, it’s important but it all amounts to 6% of the food that poor people get from the federal food programs. That’s food stamps, school lunches, WIC. So if Congress decides to cut the federal food programs by 6%, 12%, there’s no way that churches and charities can pick up the gap. We need to also get our government to do its part to end hunger.

ABERNETHY: David Beckmann of Bread for the World. Many thanks.