FRED DE SAM LAZARO, correspondent: It’s here at the Ethiopia-Somali border that some 400 refugees arrive every single day, most of them women and children, most of them fleeing not just famine, but fighting.

So far this year, 135,000 mostly women and children have registered here in this harsh but promised land for refugees. They have suffered for months and walked for days to get here. There’s food and some basic medical care — just barely enough.

LINN BIORKLUND (Doctors Without Borders): I think it’s important to point out that the emergency’s not over. It’s ongoing. We continue to see people coming and these people are living here in camps and they are in great need of humanitarian assistance.

DE SAM LAZARO: For humanitarian agencies, the challenge is to sustain the supply pipeline and keep the attention in donor countries focused on this remote region that’s seen hunger and conflict for decades. It’s an ongoing, perennial and at least partially man-made disaster. In the minds of donors, that’s very different from sudden disasters, says Mike Lloyd.  He heads a Minnesota-based group called Kids Against Hunger. 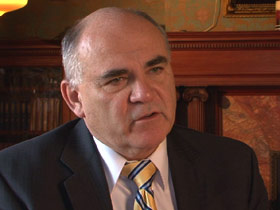 MIKE LLOYD (Kids Against Hunger): When the earthquake struck in Haiti, there was a tremendous outpouring for that event. It went on for several months. We had groups all over country wanting to pack meals, and it was a real scramble for us to meet that demand. Of course, donor dollars followed that demand for packaging the meals. When the Joplin tornado happened, of course we had a similar experience.

DE SAM LAZARO: This year, Kids Against Hunger volunteers will pack some 50 million ready-to-mix meals to be sent to needy regions around the world.  Lloyd says the response to the crisis in East Africa has been much smaller.

LLOYD: Situations like we see in the Horn of Africa are long term, they are political, at least partly political, they’re somewhat related to the drought situation but it’s been a long term political struggle in those areas and that has not excited the packers and the donors in the same way.

DANIEL WORDSWORTH (American Refugee Committee): It’s not so much about compassion fatigue. I think people are as compassionate today as they ever have been. For us, it’s actually more a belief fatigue.

DE SAM LAZARO: Daniel Wordsworth heads another Minnesota-based group, the American Refugee Committee.  ARC also saw a huge response to the Haiti earthquake.  But support for Pakistan, hit by massive floods a few months later, was far weaker.  Initially, Wordsworth says, there also was indifference toward the Horn of Africa. 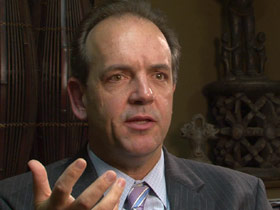 WORDSWORTH: I think what we see in both Pakistan, and we’re seeing it very strongly in Somalia, is that — and it really is almost confronting to us – is the lack of belief that people have for that country. So it’s not that they don’t feel compassionate. They just can’t make the connection. They don’t believe that either change is possible there or that their money, or their resources, what they give, will actually translate into something different on the ground. That’s the crisis that we’re seeing.

DE SAM LAZARO: Wordsworth says it’s the deeds of one percent of the population that have given Pakistan and Somalia their reputation as hostile terrorist havens.  So in its fundraising campaigns for Somalia, the American Refugee Committee has tried to “de-fang” Somalia’s image, drawing heavily on the fact that the largest Somali-American community is right in its home base in Minneapolis.

WORDSWORTH: Our doctors may be Somali, our local business professionals Somali, our taxi drivers Somali. We actually get to meet the 99% on a regular basis.

Video clip: We hosted a charity dinner… I’m a star because I donated money that I earned from a car wash… I organized an art show… I collected pennies for Somalia… 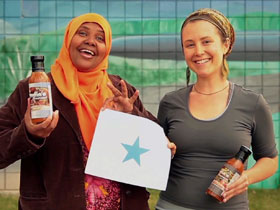 WORDSWORTH: It’s a whole different side of Somali culture that people don’t normally see. And then through, I think, that lens, you can see a dynamic, amazing group of people and your ability then to believe that if this country is full of people like this, there’s huge hope for that country.

DE SAM LAZARO: Is it working?

DE SAM LAZARO: How do you know?

WORDSWORTH: Actually we are seeing the same outpouring of compassion that we saw for Haiti. I think we will be one of the very few organizations in the world that can say that – that we’re tracking about the same.

DE SAM LAZARO: In response to crises, donors fall into two distinct categories, according to Mike Lloyd. He says grassroots campaigns and images of suffering are less effective with large donors and philanthropists than they are with individual givers.

LLOYD: Those gifts are given from the heart. They really react to the emotional sense that they’re making a difference in the individual’s life. And when we talk to corporate givers or large donors, their dollars are usually more intended, in their minds at least, the things that are going to have lasting impact. So they’re less likely to be driven by the emotional aspect of having an impact on an individual and what’s going to happen to my dollars. Are these going to really change anything or is it just going to be the same after the dollars are gone?

WORDSWORTH: Groups like Best Buy, General Mills, the Mosaic company, U-Care, a health insurance provider. Because they’ve got Somali staff, they can see it more quickly and then the rest of the staff and the rest of the company comes around behind them and shows some solidarity

DE SAM LAZARO: ARC has used its donations to run a hospital in the Somali capital, Mogadishu. The recession at home has not hurt contributions. The group says people tend to be more sympathetic and responsive in tough times. Larger donors, though, need more convincing that their dollars, should they contribute, will bring enduring change over the long term in addition to easing the immediate suffering.

For Religion & Ethics NewsWeekly, this is Fred de Sam Lazaro in Minneapolis.