FRED DE SAM LAZARO, correspondent: At eight a.m. each day, the weigh-in begins at a regional health center. Babies are weighed and the girth of their arms is also measured, a color-coded proxy for malnutrition. There’s still the odd green, or normal. Children in the yellow zone are most common. In a few weeks many more will fall, like Amina, into the red. More tests followed to assess her condition before Amina was transferred to the emergency feeding center 10 miles away. It’s near capacity, and the medical supervisor expects they’ll begin pitching expansion tents much earlier this year.

DR. HASSAN AOUADE: In May, our admissions were up more than ten percent from 2011, and that usually means our June and July will be really bad. The peak is usually in August.

DE SAM LAZARO: Ironically, the frequency, the very routineness of such crises could contain the damage in Niger this year, certainly compared to the last famine in 2010.

BISA WILLIAMS (U.S. Ambassador to Niger): This is not like the situation in 2010. I think we are better prepared, and I think it is because the government of President Issoufou really did alert the community very early. They sounded the alarm as far back as October, September of last year. 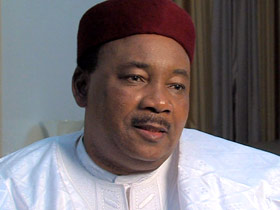 PRESIDENT MAHAMADOU ISSOUFOU: I remember the first big drought in 1973-74. Then again in 1984 we had another one. Since then, the time between droughts has been getting shorter, and I believe this is attributable to climate change.

DE SAM LAZARO: The president said he wants to take Niger beyond its chronic food emergencies.

PRESIDENT ISSOUFOU: That’s why we have created the 3N initiative—Nigeriens helping Nigeriens. It’s a structural response to the food crises that are consistently linked with our recurrent droughts. We are convinced that drought does not need to mean famine.

DE SAM LAZARO: A key part of the 3N program is to expand a greening initiative that began two decades ago. This former French colony is land-locked. The Sahara lies in the north, and it has steadily crept south, turning farmland—arid to begin with—into desert. International aid groups like World Vision have led the effort, sharing the president’s goal of going beyond humanitarian aid. 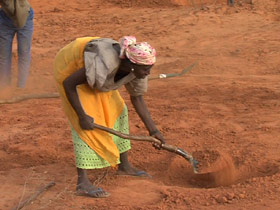 MICHEL DIATTA (World Vision): If you see the humanitarian response, it just come and respond to a need. But the long-term programming is something that really matters for World Vision. That is why FMNR is one of these initiatives that is mainstream in all of our programs.

DE SAM LAZARO: FMNR stands for Farmer Managed Natural Regeneration. It begins on barren patches like these, where World Vision and others have launched temporary employment projects.

ABDOULAYE SALEY: They give us food to dig these holes. We get four kilos of maize and six kilos of beans. This land is very dry, and they told us it will have trees. We can have better crops and fodder for our animals.

CHRIS REIJ: If you look around you, not a single tree that you see here has been planted. It’s all coming from seed stock in the soil, or coming from trees that were cut in the past, and the root system is still alive, and given chance to emerge, it will grow, or from seeds from the manure that livestock deposited here. 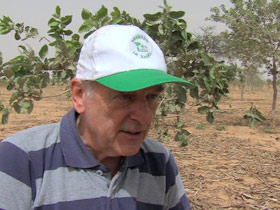 DE SAM LAZARO: The trees have kept desert sand storms at bay and returned land to productivity, says Chris Reij, a Dutch scientist who has worked in this region since the 1970s.

(speaking to Chris Reij): So this is a crop, it doesn’t look like much because it looks like it’s coming out of a desert.

REIJ: This is millet, which is one of the main crops here. And it has just been sown probably two weeks ago. But in three months time, it will be about one and a half to two meters high, and this whole field will be lush green.

DE SAM LAZARO: In the old days he says farmers used to clear their fields of trees or sapling. Under colonial laws, trees were state property, seen as a timber or forestry resources. Drought and rapid population growth added to the cutting, creating a virtual desert visible in this 1975 U.S. Geological Survey satellite picture.

World Vision Video: The leaves on the soil will protect the crop from drought. It will hold the moisture in the soil. Too easy!

DE SAM LAZARO: Chris Reij and a colleague, Tony Rinaudo, began championing agroforestry and a model for protecting trees on farmland that they saw practiced by a farmer in Burkina Faso, Niger’s western neighbor. Their work was picked up, among others, by World Vision, which produced this video. Farmers like Sakina Mati were employed to spread the word. 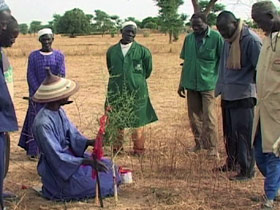 SAKINA MATI: We began using this technique in 2006, and it has worked well for us.

DE SAM LAZARO: One of the key goals was to dispel a commonly held notion that the payback is years away.

The surpluses have been gathered into a grain bank in Dansaga and about 20 other villages that are part of one aid group’s pilot project. Drought took a severe toll on the harvest last year, they say. But it hasn’t translated to famine.

WOMAN: The grain bank is helping us a lot. It is keeping our children fed until the harvest comes in.

REIJ: In a sea of difficulty, we find here examples where a surplus, a grain surplus, has been produced in the drought year 2011. 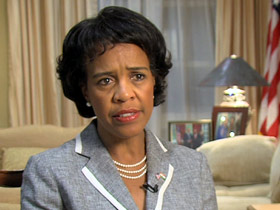 DE SAM LAZARO: Reij says Niger could some day become self-sufficient in food if villages like this are replicated on a large scale. But that “sea of difficulty” makes it daunting. Experts say it will require education and family planning. Literacy is just 30 percent, and the average woman bears seven children—a rate that will triple Niger’s population of 16 million by 2050, offsetting any gains in food production.

Then there are immediate, pressing needs of children like Amina. U.S. Ambassador Williams is optimistic Niger can make progress over the long term—also that a catastrophe can be avoided from this year’s famine. But she says it won’t be easy.

U.S. AMBASSADOR BISA WILLIAMS: There are at least 15 percent of children under two that are really, really hungry, so you are right, there is no magic bullet. It’s not—this is not something that has a quick fix to it. Development by its nature is a long-term process.

PRESIDENT ISSOUFOU: I understand why donors would be tired of supporting our population. We ourselves are tired of needing the help, of not being able to feed our own people. For us in Niger, it’s a matter of shame not to be able to feed our children. That’s why we say: Please, don’t give us fish to eat. Teach us to fish for ourselves.

DE SAM LAZARO: Niger does have a head start. Remember the 1970s satellite picture? This one is from 2005. By Chris Reij’s count, Niger has grown 200 million trees over the past two decades—the only country in Africa to have actually added forest cover in the period.

For Religion & Ethics NewsWeekly, this is Fred de Sam Lazaro in Niamey, Niger.