Interview done in the Victoria Theater at the New Jersey Performing Arts Center.

KIM LAWTON, correspondent: There are songs about God and his son. Angels, creation, pilgrimage, prayer, and the afterlife too. Paul Simon says there’s always been a spiritual dimension to his music, but the overt religious references in his most recent album, “So Beautiful or So What,” surprised even him.

PAUL SIMON, singer/songwriter: There seems to be a theme in the album, not intentional, and it’s funny because for somebody who is not a religious person, God comes up a lot in my songs.

LAWTON: Simon may not describe himself as religious, but he admits he’s fascinated by the spiritual realm.

SIMON: I think it’s a part of my thoughts, on a fairly regular basis. I think of it more as spiritual feeling. It’s, it’s something that I recognize in myself and that I enjoy and I don’t quite understand it.

LAWTON: He may not understand it, but he’s been writing and singing a lot about it, and that has generated attention. One Irish blogger suggested “So Beautiful or So What” could be the best Christian album of the year. Cathleen Falsani, an evangelical who writes frequently about religion and pop culture, called it one of the most memorable collections of spiritual musical musings in recent memory. 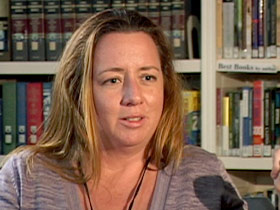 CATHLEEN FALSANI, Sojourners: It’s fascinating. It’s a stunningly beautiful new album and he’s a great surprise to me and frankly a huge blessing.

SIMON: I was raised to a degree, enough to be, you know, bar-mitzvahed and have that much Jewish education, although I had no interest. None.

LAWTON: Now at 70, he says he’s very interested in questions about God. In his song, “The Afterlife,” he speculates about what happens after death. There’s a humorous aspect where he imagines waiting in line, like at the Department of Motor Vehicles. But there’s a serious aspect too.

SIMON: By the time you get up to speak to God and you actually get there, there’s no question that you could possibly have that could have any relevance.

LAWTON: One of the most unusual songs on the album, “Getting Ready for Christmas Day” includes parts of a sermon preached in 1941 by a prominent African-American pastor, J.M. Gates. Simon heard the sermon on a set of old recordings.

(To Simon) What was it about the sermon that caught you and influenced you? 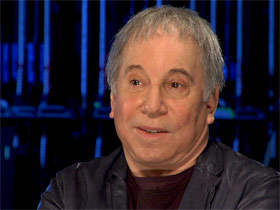 SIMON: I liked the rhythm of the call and response between the pastor and the congregation. What he was saying was very dark. It was a very pessimistic sermon. You don’t know where you’ll be, you might be in a lonesome grave. Here as a songwriter I’m not only writing words, I’m also writing sounds and music. So to take a modern, digitally recorded record and combine it with something from 1941 had a very interesting effect for me. I liked it a lot. It might be my favorite track on the record.

LAWTON: Simon says when he’s writing a song, he doesn’t start out with a theme or a message. He lets the story evolve.

SIMON: Usually the first sentence is, or the first line is, what I’m interesting in finding, because that will launch me on, on a trail that often becomes a story. And then I’ll find out whatever it is that’s on my mind, my subconscious mind.

LAWTON: The song “Love in Hard Times” begins with God and his son visiting earth.

SIMON: To begin with a sentence that is the foundation of Christianity is, I said, ‘This is going to be interesting. Now what am I going to say about a subject that I certainly didn’t study’?”

LAWTON: The song ends with a love story, which he says is really about his wife. 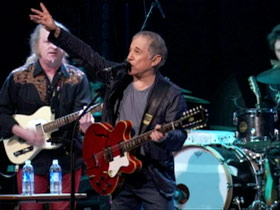 SIMON: When you’re looking to be thankful at the highest level, you need a specific and that specific is God. And that’s what that song is about.

LAWTON: He says the beauty of life and of the earth lead him to thoughts about God.

SIMON: How was all of this created? If the answer to that question is God created everything, there was a creator, than I say, great! What a great job. And I like the idea. I find it very, I don’t know, I find it comforting in some way. But if the answer to that is there is no God, I don’t feel like, well, what a jerk I’ve been. I feel, oh fine, so there’s another answer. I don’t know the answer. I’m just a speck of dust here for a nanosecond, and I’m very grateful.

LAWTON: Simon says he’s fine with not knowing the answers, but he has sought input on his questions. He has spoken with the Dalai Lama, and he once spent hours talking with British evangelical theologian John Stott, who died last year.

SIMON: I talked about everything that was on my mind about things that seemed illogical, and he talked about why he had come to his conclusions and I think both of us enjoyed the conversation immensely. And I left there feeling that I had a greater understanding of where belief comes from when it doesn’t have an agenda.

LAWTON: Many of Simon’s songs raise universal questions about things like destiny and the meaning of life.

SIMON: Quite often, people read or hear things in my songs that I think are more true than what I wrote.

FALSANI: He looks at the world and kind of wonders what the heck is going on, like many of us do. And he asks good questions, and sort of seems to have his finger on the heartbeat spiritually of a culture, then and now. Sort of a God-chronicler by accident.

LAWTON: Simon says he’s gratified, and somewhat mystified, that some people have told him they believe God has spoken to them through his music.

SIMON: Is it a profound truth? I don’t know. I don’t know, but it sounds nice and the combination with the music and the words and all that produces a certain effect and I feel I’m like a vessel and it, it passed through me and I was the editor and I’m glad that people like it and yeah, that’s it. I’m glad.