BOB ABERNETHY, host: Finally, something we almost never do here: report on a friend and benefactor on the occasion of his retirement. Since this program first went on the air 15 years ago, the Lilly Endowment of Indianapolis has been our principal funder. Not once during all those years has it tried to influence our editorial decisions about covering the news of all religions. The head of the Endowment’s religion division has been Craig Dykstra, who is retiring from Lilly this summer. Dykstra’s friends say the Endowment’s grants and Dykstra’s personal religious convictions have had a profound influence on thousands of Christian believers and have helped restore vigor to many congregations, especially in the Protestant Mainline.

The Reverend Doctor Craig Dykstra is a teacher, a theologian and an ordained Presbyterian minister in what Christians call the Reformed tradition, dating from John Calvin.

CRAIG DYKSTRA: I think the heart of it is an understanding of God as a gracious, giving, generous God, and the proper response of human beings to that generosity is gratitude. Grace and gratitude is the fundamental theme of the Reformed tradition, and that’s where it all starts. 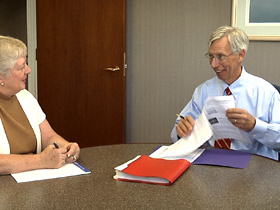 ABERNETHY: While Dykstra has been at the Endowment, it has concentrated most of its religion grantmaking on congregations, and it found that the best way to do that was to help pastors. So on Dr. Dykstra’s watch the Endowment made possible sabbaticals of rest and study and other kinds of renewal for some 50,000 pastoral ministers associated with nearly 10 percent of all the congregations in the country. Over the 23 years that Dr. Dykstra has been head of its religion division, the Endowment has made grants to congregations, pastors, future ministers, and others totaling $1.8 billion. That’s billion with a “B.”

BARBARA WHEELER (Auburn Seminary): There are countless ministers out there, thousands of them, whom I think are clearer in their vocation and more confident and would say they are more inspired, doing more excellent work as a result of the programs that Craig and his colleagues put in place.

ABERNETHY: In addition to helping veteran pastors, the Endowment has put a special emphasis on youth, helping young pastors learn the practical skills of ministry, which are not always taught in seminary. And among other programs it created summer academies where bright high school students could study theology and consider becoming ministers, which many of them have done. Beyond all these and other programs, the ultimate goal of Dykstra and the Endowment is the encouragement of what they call “human flourishing.” 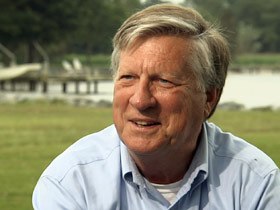 THOMAS LONG (Emory University): It’s about what it means to be fully alive as a human being.

ABERNETHY: Tom Long is a professor of preaching and Dr. Dykstra’s best friend.

JAMES WIND (Alban Institute): Being honest about all the brokenness that is out there in the world; nonetheless there are really things we can do that allow humans to be fully human as the Creator intended.

ABERNETHY: Dorothy Bass has collaborated with Dykstra on several books. 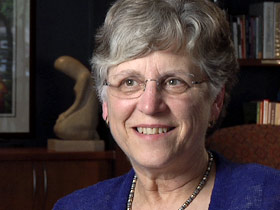 DOROTHY BASS (Valparaiso University): Craig lives and has a very powerful sense of that God upholds us in mercy and that to live in awareness of that and in response to that is just the best thing there is and is the way to full humanity.

ABERNETHY: It is this kind of life that Dykstra, citing the New Testament, wants to invite.

DYKSTRA: What we really hope for for people of faith, and indeed for all people, is the gift of life abundant that our text just talked about, a kind of life and a way of life given by God, received in gratitude, and lived out in vocation as a response to God’s calling.

ABERNETHY: As Dystra cleaned out his office recently, he and his friends were asked to assess the success of the Endowment’s religion grantmaking over the past 20 years. Has it helped people flourish? Has it helped slow down the Mainline decline?

L. GREGORY JONES (Duke University Divinity School): The first thing I’d say that he has done most effectively is change the tone of how Christians in America think about the future, by making it more focused around hope, around possibilities, around excellence, around a way of life abundant.

LONG: Especially Mainline Christianity has tremendously benefited, been strengthened by what Lilly has done. Anytime you work with the church you’re working with a thimble in the ocean, and there are these tremendous secular powers and forces at work that are not always in our interest. So this is a remarkable part of Craig’s hope, that he knows that these efforts, when you put the telescope on them, are quite small over against the cultural forces, will pay off in terms of—have paid off and will pay off in terms of deeper church life, more faithful ministry.

ABERNETHY: Dykstra himself sees great hope in the number of young people the Endowment has helped to become ministers.

DYKSTRA: They’re bright, they’re committed, they are people you just want to be around. I’m encouraged by that more than anything else. Just plant the seeds in hope and in faith, and you see early fruits that are terribly encouraging, and I think there is more to come. I hope I live long enough to see a lot more of it.