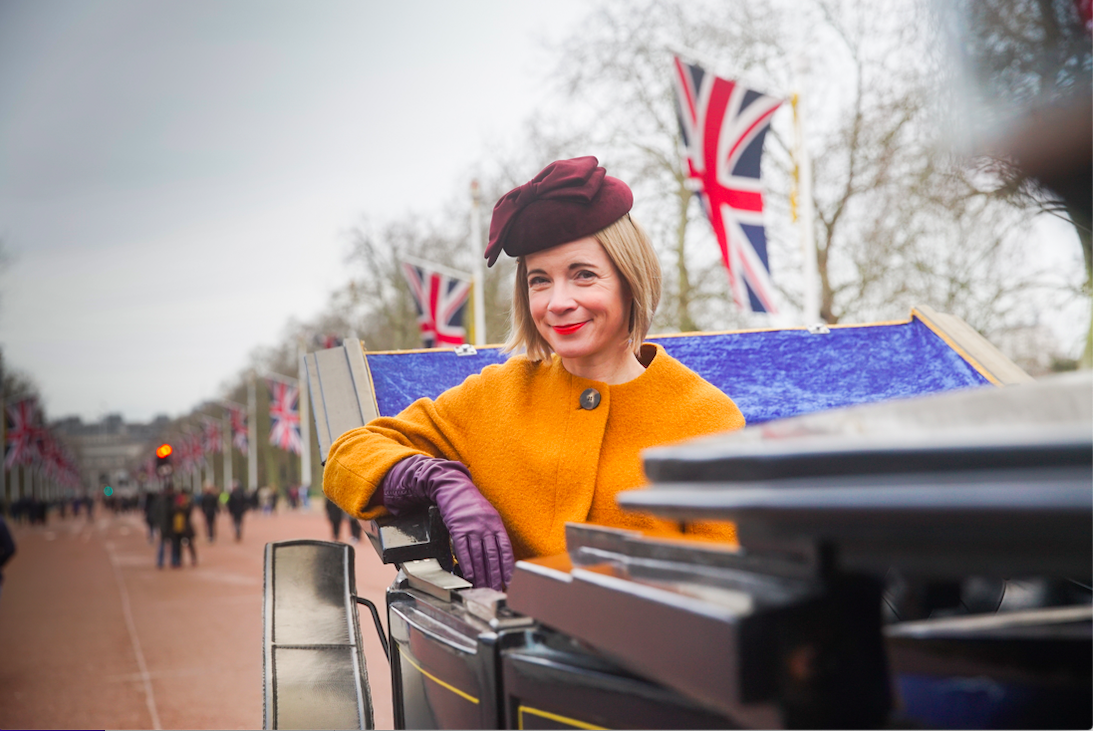 Lucy Worsley in a carriage on The Mall, London
Credit: Lorian Reed-Drake

ARLINGTON, VA; July 14, 2020 – – Once upon a time, the idea of the monarchy was spread through fairy tales, but since the days of Victoria and Albert, photographic images have shaped public perception. From official portraits to tabloid snapshots, the camera has been the British royal family’s confidante, messenger — and nemesis. In this intriguing new special, Lucy Worsley explores the royal family photo album, from Queen Victoria to Princess Diana to the current generation, and reveals how the monarchy used the power of the photograph to reinvent itself, engage the public and ensure its survival. LUCY WORSLEY’S ROYAL PHOTO ALBUM premieres Sunday, August 16, 8:00-9:00 p.m. ET (check local listings), on PBS, PBS.org and the PBS Video App.

In this new program, Lucy explores the various types of photos that enabled the royal family to conduct a dialogue with the British people, forging a modern monarchy that reigns rather than rules. Along the way, she recreates the Queen’s iconic coronation portrait, digs out photogenic outfits from the Royal Ceremonial Dress Collection, has her own Victorian-style picture taken, and gets the inside story from current royal photographers Anwar Hussein and Chris Jackson.

Lucy examines some of the earliest photos of the British monarchy — 19th century images of Queen Victoria, Prince Albert and their children, taken at a time when monarchies across Europe were under threat. She contends that photography helped save them by presenting them as an actual family — royal yet relatable. Lucy also explains how advances in technology enabled a more informal side to royal photography. In the late 1800s, Princess (later Queen) Alexandra began taking pictures of the family using her new, lightweight Kodak camera. The results revealed the royals as they’d never been seen before — a typical family enjoying simple pleasures. This insider’s approach is continued today by Catherine, Duchess of Cambridge, who posts her family photos on Instagram.

Lucy also explores how classic photo ops, like “the royal walkabout,” allow members of the monarchy to mingle with the public and appear spontaneous. In reality, these are carefully planned and controlled events captured by professional photographers.

But for all the pictures the royal family wants to share, there are many they wish had never been taken. In the 1930s, photography was turned against the monarchy for the first time when the tabloids used every trick to capture evidence of Edward VIII’s scandalous relationship with Wallis Simpson. When photos of the couple were finally published, they showed Simpson touching the king’s arm, and the public was shocked. A few days later, he abdicated. The new king, Edward’s brother George VI, sought to offset the damage by releasing photos of him and his family in everyday scenes, stressing their respectability and stability. Wholesome young princesses Elizabeth and Margaret, often posing with their dogs, were front and center.

But the image of the shy young girl holding a Corgi was swept away with the revelatory coronation portrait of Elizabeth II by favorite royal photographer Cecil Beaton. Drawing upon centuries of royal portraiture for inspiration, Beaton created an iconic photo that conjured a vision of magic, splendor and tradition — with a touch of Hollywood glamour. Younger sister Margaret took a more modern approach, choosing to work with fashion photographer Anthony Armstrong-Jones, whose smoldering portrait of the princess hinted at their off-camera relationship and future as husband and wife.

No royal, however, understood how to communicate through photography as well as Princess Diana, who was endlessly pursued by the cameras. With great skill, she used the constant attention to shine a light on issues that mattered to her — shaking hands with AIDS patients at a time when that was considered radical, or stepping onto a recently cleared minefield in Angola. As a consequence of her tragic death, Lucy believes that the relationship between the royals and photography will never be as close again, with the younger generation  exerting much tighter control over how their images are taken and used.

Over centuries, the royal family — who must remain in the camera’s gaze whether they like it or not — have learned the perils and power of photography. As Lucy says: “A photograph is never just a photo. It always has a meaning that goes deep beneath the surface, and nobody knows this better than the royal family themselves.”

The host of several popular PBS specials, Lucy Worsley is a royal historian, TV host, chief curator at Historic Royal Palaces (the charity which looks after the Tower of London, Hampton Court Palace, Kensington Palace and other historic places) and author of numerous books, including Queen Victoria, Jane Austen at Home, Eliza Rose, A Very British Murder and more.

LUCY WORSLEY’S ROYAL PHOTO ALBUM is produced by Academy 7 in association with the BBC and PBS. Andy Hall is the producer and director. Executive Producers are Sebastian Barfield and John Das. The editor is Alex Boyle. Commissioning Editor for BBC is Lamia Dabboussy. Bill Gardner is the Executive in Charge for PBS.