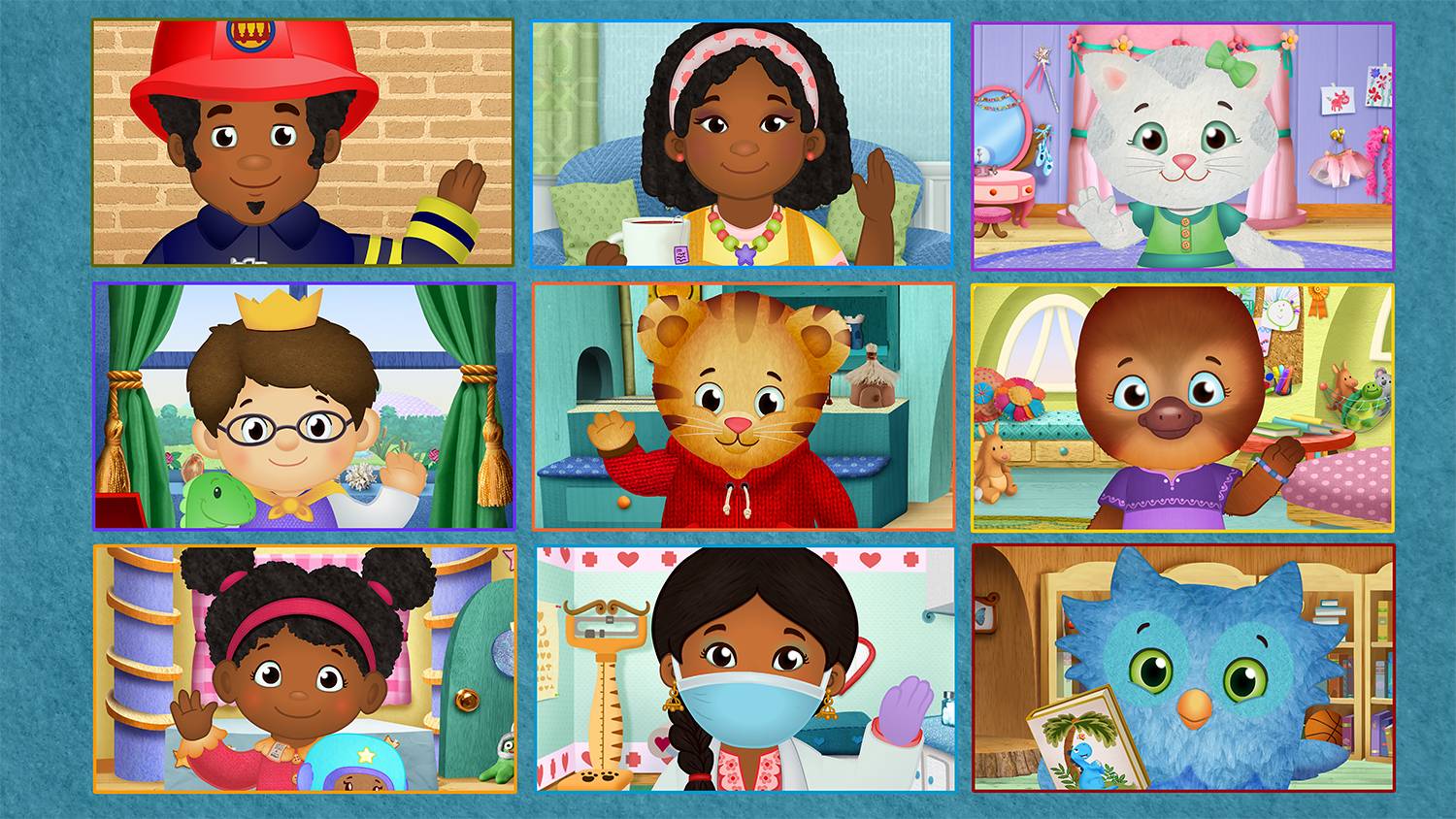 Season 5 of Emmy-Winning Hit Kicks Off with Sing-Along Special to Support Families in Today’s Unprecedented Times, Followed by Week of New Episodes

July 15, 2020 – Today, PBS KIDS announced a new special and episodes of DANIEL TIGER’S NEIGHBORHOOD, beginning Monday, August 17. Preschoolers and their families from neighborhoods across the country can hop on Trolley and “ride along” with Daniel Tiger, his family, and friends for a brand-new season of exploring big feelings, learning, and having fun. The top-rated, Emmy-winning series from Fred Rogers Productions will premiere on PBS stations nationwide (check local listings), the PBS KIDS 24/7 channel, and PBS KIDS digital platforms.

The new season of the hit show kicks off with “DANIEL TIGER’S NEIGHBORHOOD: Won’t You Sing Along with Me?,” a timely, music-filled special that helps address some of the challenges and disappointments “little tigers” and their families may be experiencing due to the COVID-19 pandemic.

In the special, when Daniel learns he can’t gather with all of his neighbors at the Neighborhood Carnival this year, it leads to a lot of big feelings and questions, including what to do when he misses the people he loves, how to keep himself and others healthy, and how to find ways to enjoy the extra time at home with his family. Mom and Dad Tiger use new and fan-favorite songs from the series to help reassure him – as well as young viewers and their parents at home, who are encouraged to sing along! The special was created with major funding from the Corporation for Public Broadcasting.

“As COVID-19 continues to pose challenges to families across the country, PBS KIDS is uniquely positioned to meet the needs of children, parents, and caregivers,” said Lesli Rotenberg, Chief Programming Executive and General Manager, Children’s Media and Education, PBS. “Learning lies at the heart of our mission, and we’ve been proud to be able to step in and offer at-home learning solutions, content and resources, like this timely special from DANIEL TIGER’S NEIGHBORHOOD, that reach kids where they are with age-appropriate lessons – especially in areas where families may have limited or no access to broadband internet.”

In addition, five new episodes, including a 22-minute special, “Daniel’s Substitute Teacher,” will premiere throughout the week. A new digital game from DANIEL TIGER’S NEIGHBORHOOD will be available later this summer on pbskids.org and the PBS KIDS Games app. In “Dance Party,” kids can dance along with Daniel and his friends, follow their dance moves, or simply listen to the music and dance in their own way. To further support families and educators as school time approaches, whether it be at-home learning or an adjusted back-to-school schedule, new DANIEL TIGER’S NEIGHBORHOOD activities and resources will be available on PBS KIDS for Parents and PBS LearningMedia.

“Season 5 of DANIEL TIGER’S NEIGHBORHOOD will showcase even more relatable storylines and fresh musical strategies to help keep preschoolers learning, growing, and navigating the world around them,” said Paul Siefken, President and CEO of Fred Rogers Productions. “In addition to the upcoming special, the season will include episodes about sudden changes at school, separation from family members, staying safe, hospital stays, respecting one’s personal space, disappointment, generosity, and grown-ups taking care of you.”

Throughout 20 new Season 5 episodes, Daniel and his friends will learn gentle lessons about managing sibling rivalry, missing people when they’re far away, being “big enough” to do things alone, coping with accidents, the importance of listening and following rules, and much more. New friends will also join the Neighborhood of Make-Believe.

Each episode of DANIEL TIGER’S NEIGHBORHOOD showcases two distinct stories starring 4-year-old Daniel Tiger and his friends, who invite viewers to join them on their adventures as they explore the colorful Neighborhood of Make-Believe. Irresistible musical strategies reinforce the unique theme of every show, so preschoolers and parents can sing along and incorporate them into their daily lives. The executive producers of the popular animated series are Angela C. Santomero, Chief Creative Officer at 9 Story Media Group; Ellen Doherty, Chief Creative Officer of Fred Rogers Productions; and Vince Commisso, President & CEO, 9 Story Media Group.

The animated show has garnered a host of prestigious awards, including the 2019 Daytime Emmy Award for Outstanding Preschool Children’s Animated Series, the 2020 Parents’ Choice Gold Award for Television, the 2018 Common Sense Media Seal of Approval, and is nominated for Outstanding Achievement in Youth Programming by the Television Critics Association in 2020. Apps, games, activities, and more from DANIEL TIGER’S NEIGHBORHOOD can be found on pbskids.org/daniel.

“DANIEL TIGER’S NEIGHBORHOOD: Won’t You Sing Along with Me?”
Premieres and streams beginning Monday, August 17
This sing-along special helps address some of the challenges and changes preschoolers and families have been facing lately. When Daniel learns he can’t gather with all of his neighbors at the Neighborhood Carnival this year, it leads to lots of big feelings and questions, including what to do when he misses people he loves, how to keep himself and others healthy, and how to find ways to enjoy the extra time at home with his family. Young fans will revisit their favorite songs from the show in this timely and topical DANIEL TIGER’S NEIGHBORHOOD event.

“Daniel’s Substitute Teacher”
Premieres and streams Monday, August 17
Daniel is so excited for the Spring Sing at school today, but when he arrives, he discovers that Teacher Harriet is not there to teach the routine to the students. The class meets a substitute teacher named Mr. Malik. Daniel is hesitant at first, but learns that different can be fun, too.

“Prince Wednesday’s Accident/ Daniel and Miss Elaina’s Kite Accident”
Premieres and streams Tuesday, August 18
“Prince Wednesday’s Accident”
During a beach party at school, Prince Wednesday spills paint on his pants and the floor! He’s really upset, but telling Teacher Harriet what happened makes him feel so much better. Later, Daniel accidentally breaks someone else’s project, but he learns that accidents happen to everyone, and telling a grown-up about it is a good choice.
“Daniel and Miss Elaina’s Kite Accident”
Daniel is playing at Miss Elaina’s house when they accidentally break her dad’s old kite. They feel bad, but when they tell Music Man Stan what happened, he explains that accidents happen to everyone, even adults!

“Quiet Time at School/ Naptime in Blanket City”
Premieres and streams Wednesday, August 19
“Quiet Time at School”
It’s Quiet Time at school, but Daniel and Miss Elaina don’t want to stop playing with their trains. Teacher Harriet shows the kids the different ways they can settle down, like stretching, reading a book, or closing your eyes. After Quiet Time, Daniel and Miss Elaina are reenergized to continue playing trains, right where they left off.
“Naptime in Blanket City”
Daniel and Jodi make a pretend city out of all of the blankets in the Platypus house. When it’s nap time for Teddy and Leo, Jodi finds Leo’s missing blankie for him to snuggle—that’s what he needs to help him rest. Later, Daniel finds something to help him rest, too: cuddling with his favorite stuffie.

“The Fire Drill/ Daniel and Mom Go to the Market”
Premieres and streams Thursday, August 20
“The Fire Drill”
At school, Teacher Harriet shows the class what to do to stay safe during a fire drill. While Daniel and his friends are playing, the fire alarm starts to ring, and the class practices their fire drill, following Teacher Harriet’s instructions. The Neighborhood firefighters arrive to check on their classroom and teach the kids all about staying safe during an emergency.
“Daniel and Mom Go to the Market”
Daniel and Mom Tiger are making a yummy breakfast at home when a mug falls and shatters. Daniel is about to help pick up the pieces, but his mom tells him to stop and listen to stay safe while she cleans up. When they go to the market afterwards, Daniel gets lost in one of the aisles. With the help of Prince Tuesday, he stops and listens, and Mom Tiger is able to find him.

“Daniel Waits with Dad/ Margaret’s New Shoes”
Premieres and streams Friday, August 21
“Daniel Waits with Dad”
Daniel is SO excited for the new “Tigey the Adventure Tiger” book to come out, but before he can get it, he has to go to Dr. Plat’s office with Dad Tiger. Waiting can be hard, but playing and imagining make the waiting go faster. Once they’re at the library, Daniel and Jodi pretend while they wait in line, and soon he gets to read the book with Dad.
“Margaret’s New Shoes”
Daniel is excited to play at the playground, but first they need to go to the store to get new shoes for Margaret. It can be very hard to wait, but Daniel learns to sing and imagine to pass the time. Soon it’s time to go the playground—playing made the waiting easier!

About Fred Rogers Productions
Fred Rogers Productions was founded by Fred Rogers in 1971 as the non-profit producer of Mister Rogers’ Neighborhood for PBS. In the years that followed, it not only created hundreds of episodes this much-loved program, but also extended Fred’s values and approach to other efforts in promoting children’s social, emotional, and behavioral health while supporting parents, caregivers, teachers, and other professionals in their work with children. Fred Rogers Productions continues to build on Fred’s legacy in innovative ways through a wide variety of media and engages new generations of children and families with his timeless wisdom. The company’s highly-rated, Emmy Award-winning children’s series include Daniel Tiger’s Neighborhood, Peg + Cat, Odd Squad, and Through the Woods as well as Donkey Hodie, the eagerly-anticipated puppet series, inspired by the character from Mister Rogers’ Neighborhood, launching winter 2021 on PBS KIDS. For more information, visit www.fredrogers.org or follow us on Twitter, Facebook, Instagram, and LinkedIn.

About the Corporation for Public Broadcasting
The Corporation for Public Broadcasting (CPB), a private, nonprofit corporation created by Congress in 1967, is the steward of the federal government’s investment in public broadcasting. It helps support the operations more than 1,500 locally owned and operated public television and radio stations nationwide. CPB is also the largest single source of funding for research, technology and program development for public radio, television and related online services. For more information, visit www.cpb.org and follow us on Twitter @CPBmedia, Facebook and LinkedIn, and subscribe for email updates.