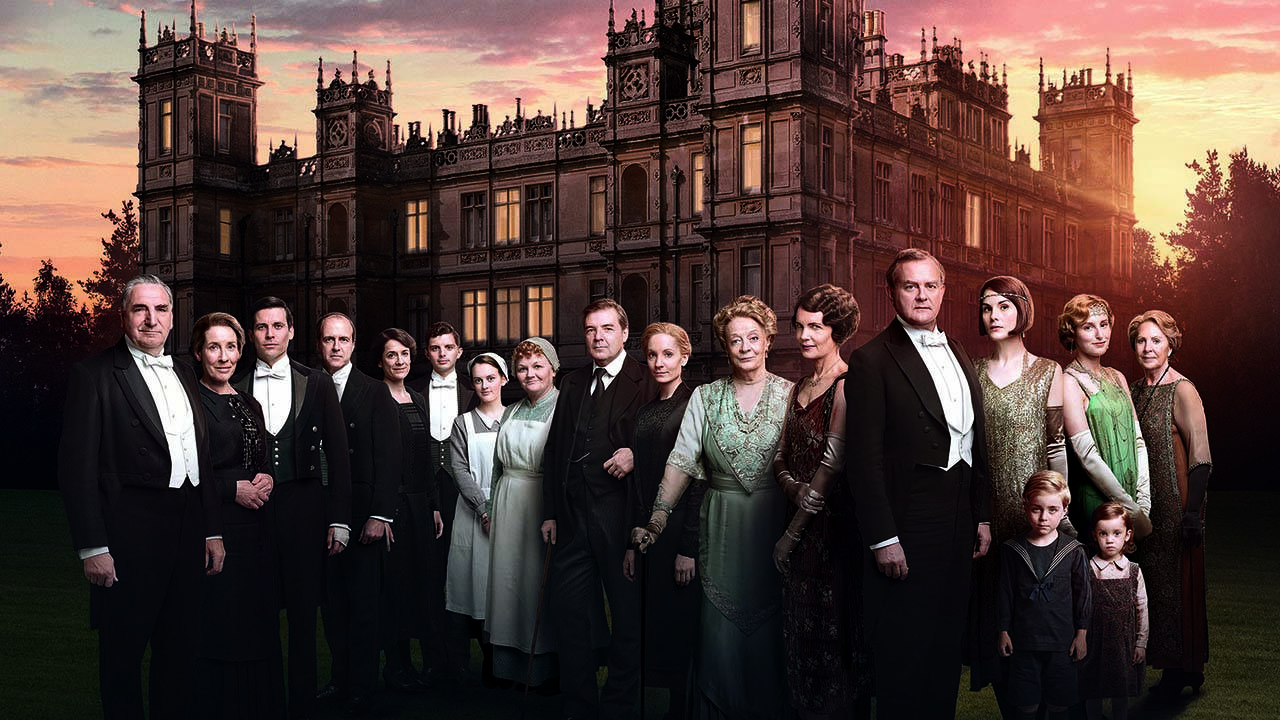 ARLINGTON, VA; January 5, 2016 -- PBS and WGBH announced today that viewers tuned in by the millions on Sunday night to kick-off the final season of one of television’s most beloved dramas. Sunday’s premiere of “Downton Abbey, The Final Season” on MASTERPIECE drew an average audience of 9.9 million viewers (Nielsen Live+Same Day Fast National data, 6.2 household rating). “Downton Abbey,” a Carnival Films/MASTERPIECE co-production, remains the top PBS drama of all time.

The sixth season premiere of the Emmy®, Golden Globe®, SAG Award®, Producers Guild® and BAFTA®-winning series drew an audience nearly even with that of the Season 5 premiere (10.1 million viewers), and the episode’s 6.2 household rating ties it with the Season 4 premiere as the highest-rated episode to date. The episode also drew the biggest ever household audience for “Downton Abbey” with 7.3 million U.S. households tuning in (all based on Nielsen Live+Same Day Fast National data).

Viewership for the episode, which began at 9:00 p.m. ET, remained solid throughout the episode’s one-hour, 15-minute duration. Between 9:30-10:15 p.m., PBS was the second most-watched network on Sunday, behind NBC (based on weighted metered market program averages).

“It’s no surprise that the final season premiere of ‘Downton Abbey’ had such a large audience,” said Beth Hoppe, Chief Programming Executive and General Manager, General Audience Programming, PBS. “Since ‘Downton Abbey’ premiered six years ago, it’s been the show’s loyal fans who have made this show into a global phenomenon. ‘Downton Abbey’ has been event viewing for each and every one of its seasons, and we’re thrilled that audiences are coming together to help give the show the send-off it deserves. Thanks also to MASTERPIECE, Carnival Films and our member stations, who are helping us make the last season of ‘Downton Abbey’ the biggest and best yet.”

MASTERPIECE executive producer Rebecca Eaton noted that MASTERPIECE is celebrating its 45th anniversary on PBS in January. “How perfect that the final season of ‘Downton Abbey’ kicks off our 45th anniversary,” says Eaton. “‘Downton Abbey’ epitomizes the kind of programming we’ve been offering viewers since 1971: impeccably-told stories with characters who touch peoples’ hearts. MASTERPIECE is proud to have brought this beloved series to PBS audiences.”

Gareth Neame, executive producer of “Downton Abbey” and managing director of Carnival Films, which produces the series, added, “We are so grateful for the continued support of audiences that have wholeheartedly embraced the Crawley family and those who serve them for the last five years, helping to make ‘Downton Abbey’ the global success it has become. As we begin the final chapter of this remarkable journey, we can assure fans that season six will deliver Downton’s customary drama and revelation along with the satisfaction of knowing where these beloved characters’ lives will take them after they’ve left our screens.”

According to Nielsen, a Twitter TV audience of 1.4 million people saw more than 47,000 tweets during the premiere evening, generating a total of 6.1 million impressions and making it the #1 primetime series episode, ranked by Unique Audience. PBS and MASTERPIECE insiders — as well as moderators from Tom and Lorenzo (@tomandlorenzo), Mandi Bierly of Yahoo! TV (@Mandi Bierly) and Sandra Gonzalez of Mashable (@TheSandraG) — will continue to host live discussions during each broadcast to connect directly with fans on social media.

To engage viewers in the series’ premiere, more than 137 local PBS stations hosted a combined total of more than 320 preview-screening events. These events ranged from intimate gatherings at major donors’ homes, to multiple showings at 3,000-seat theaters to extend the excitement of the series through communities across the country.

The new season is available for streaming free on PBS station websites, PBS.org and PBS’ apps for iOS, Android, Apple TV, Roku, Android TV, Xbox, Chromecast and FireTV, for a limited time after each national broadcast.

Online excitement has been building for Season 6 over the past several months, with about 1.7 million streams of previews and clips across all PBS platforms leading up to the Season 6 premiere. (Source: Google Analytics 9/1/15 - 1/3/15)

There were approximately 360,000 streams of “Downton Abbey, Season 5” full episodes across all PBS platforms in the weeks leading up to the broadcast premiere of Season 6. (Source: Google Analytics 12/1/15 - 1/3/16)

New episodes of “Downton Abbey, The Final Season” can be purchased the day after their broadcast premieres through iTunes, Amazon Instant Video, VUDU and Google Play. Fans can also purchase Seasons 1-5 of “Downton Abbey” and pre-order Season 6 through sites and services including iTunes, Amazon.com and ShopPBS.org.

“Downton Abbey” is a Carnival Films/MASTERPIECE co-production written and created by Julian Fellowes. The series is executive produced by Gareth Neame.

PBS, with 350 member stations, offers all Americans the opportunity to explore new ideas and new worlds through television and online content. Each month, PBS reaches more than 103 million people through television and over 33 million people online, inviting them to experience the worlds of science, history, nature and public affairs; to hear diverse viewpoints; and to take front row seats to world-class drama and performances. PBS’ broad array of programs has been consistently honored by the industry’s most coveted award competitions. Teachers of children from pre-K through 12th grade turn to PBS for digital content and services that help bring classroom lessons to life. PBS’ premier children’s TV programming and its website, pbskids.org, are parents’ and teachers’ most trusted partners in inspiring and nurturing curiosity and love of learning in children. More information about PBS is available at www.pbs.org, one of the leading dot-org websites on the Internet, or by following PBS on Twitter, Facebook or through our apps for mobile devices. Specific program information and updates for press are available at pbs.org/pressroom or by following PBS Pressroom on Twitter.

The top-rated primetime show on PBS, MASTERPIECE is presented on PBS by WGBH Boston. Rebecca Eaton is executive producer. Funding for the series is provided by Viking River Cruises and Audible, with additional support from public television viewers and contributors to The MASTERPIECE Trust, created to help ensure the series’ future.

WGBH Boston is America’s preeminent public broadcaster and the largest producer of PBS content for TV and the Web, including FRONTLINE, NOVA, AMERICAN EXPERIENCE, MASTERPIECE, ANTIQUES ROADSHOW, ARTHUR, CURIOUS GEORGE and more than a dozen other primetime, lifestyle, and children’s series. WGBH also is a major supplier of programming for public radio, and oversees Public Radio International (PRI). As a leader in educational multimedia for the classroom, WGBH supplies content to PBS LearningMedia, a national broadband service for teachers and students. WGBH also is a pioneer in technologies and services that make media accessible to those with hearing or visual impairments. WGBH has been recognized with hundreds of honors. More info at www.wgbh.org.

Carnival Films is a division of NBC Universal International Studios and is the UK’s largest drama specialist. The company is responsible for the global TV sensation Downton Abbey, winner of three Golden Globes and 12 Primetime Emmy awards, including Best Mini-series. It is the most-nominated non-US show in the history of the Emmys with a total of 59 nominations and is now in over 250 territories worldwide. Among numerous national and international awards, including three Screen Actors Guild Awards and three National Television Awards, the show has even garnered a Guinness World Record for highest critical ratings for a TV show, and the BAFTA Special Award in recognition of its outstanding global success. Downton Abbey is executive produced by Carnival’s managing director Gareth Neame, who sold the production company to NBCUniversal in 2008.

The sixth and final season of Downton Abbey is currently aired on ITV in the UK and returns to PBS in January 2016. Carnival’s latest series The Last Kingdom recently concluded on BBC TWO and BBC America. Stan Lee’s Lucky Man also airs on Sky One in 2016.