Arlington, VA (April 11, 2012) – PBS announced today that THE DUST BOWL, a new two-part, four-hour documentary by Ken Burns, will air November 18 and 19, 2012, 8:00-10:00 p.m. ET on PBS (check local listings). The film chronicles the environmental catastrophe that, throughout the 1930s, destroyed the farmlands of the Great Plains, turned prairies into deserts and unleashed a pattern of massive, deadly dust storms that for many seemed to herald the end of the world. It was the worst manmade ecological disaster in American history.

A preview is available at pbs.org/dustbowl.

“The Dust Bowl was a heartbreaking tragedy in the enormous scale of human suffering it caused. But perhaps the biggest tragedy is that it was preventable,” said Burns. “This was an ecosystem—a grassland—that had evolved over millions of years to adjust to the droughts, high winds and violent weather extremes so common to that part of the country. In the space of a few decades at the start of the 20th century, that grassland was uprooted in the middle of a frenzied wheat boom.  When a drought returned, all that exposed soil took to the skies, and people worried that the breadbasket of the nation would become the next Sahara desert. If we show the same neglect to the limits of nature now as we did then, it is entirely possible that this could happen again.”

Dayton Duncan, writer and co-producer of THE DUST BOWL, and a longtime collaborator with Burns, said, “While the rest of the country was suffering through the financial disaster of the Great Depression, the farmers of the southern plains were not only dealing with that, but also with something much more ominous and overpowering. Dust storms were taking their land and food, killing their children and turning the day into night. Plagues of grasshoppers and rabbits ravaged what little vegetation remained. It was as if nature itself had turned against them. But in fact it was the other way around: We had tried to impose our will on nature and the results were catastrophic.”

Until the arrival of European and American settlers in the late 19th century, the southern plains of the United States were predominantly grasslands, seldom used for farming.  Bitterly cold winters, hot summers, high winds and, especially, low, unreliable precipitation made it unsuitable for standard agriculture. But at the start of the 1900s, offers of cheap public land attracted farmers to the region, and in World War I, in the midst of a relatively wet period, a lucrative new wheat market opened up. Advances in gasoline-powered farm machinery made production faster and easier than ever.  During the 1920s, millions of acres of grassland across the plains were converted into wheat fields at an unprecedented rate.

In 1930, with the Great Depression underway, wheat prices collapsed. Rather than follow the government’s urging to cut back on production, desperate farmers harvested even more wheat in an effort to make up for their losses. Fields were left exposed and vulnerable to a drought, which hit in 1932.

Once the winds began picking up dust from the open fields, they grew into dust storms of biblical proportions. Each year the storms grew more ferocious and more frequent, sweeping up millions of tons of earth, covering farms and homes across the plains with sand and spreading the dust across the country. Children developed fatal “dust pneumonia,” business owners unable to cope with the financial ruin committed suicide and thousands of desperate Americans were torn from their homes and forced on the road in an exodus unlike anything the United States had ever seen.

“In THE DUST BOWL, Ken Burns and Dayton Duncan give
us a gripping drama of people pitted against horrific storms, never-before-experienced, then or now,” said Paula Kerger, President and CEO, PBS. “It is eloquently and movingly told through the stories and oral histories of those who lived to tell the tale of that tragic time. We’re very proud to capture the first-hand testimonies of these survivors, many of whom are in their late 70s and 80s, and who are making an important contribution to our nation’s history and furthering our understanding of this time and its implications for the future.”

THE DUST BOWL is also a story of heroic perseverance against enormous odds: families finding ways to survive and hold on to their land, national and local government programs that kept hungry families afloat and a partnership between government agencies and farmers to develop new farming and conservation methods.

THE DUST BOWL chronicles this critical moment in American history in all its complexities and profound human drama. It is, in part, oral history, using compelling interviews with 26 survivors of those hard times—what will probably be the last recorded testimony of the generation that lived through the Dust Bowl. Filled with seldom-seen movie footage, previously unpublished photographs, the songs of Woody Guthrie and the observations of two remarkable women who left behind eloquent written accounts, the film is also a historical accounting of what happened and why during the 1930s on the southern Plains.

In conjunction with the broadcast, PBS is partnering with The GRAMMY Musem to celebrate the centennial of Woody Guthrie’s birth. As with other Burns films, PBS will also partner with other organizations to expand the conversation around the film, as well as screening clips around the country building up to the broadcast. There will also be an extensive education initiative, reaching students in schools around the country.

A preview website for THE DUST BOWL is available at pbs.org/dustbowl and includes video clips, opportunities for users to share stories, background information on the film and filmmakers, and information on engagement activities.  The full companion site for THE DUST BOWL will launch in October and will include selections from scripts, video outtakes and transcripts from interviews, archival footage and photographs and music, as well as educational outreach materials and lesson plans that will enable teachers to use the Dust Bowl as a historical lens to explore changes affecting the environment today.  PBS has also launched a social media campaign designed to engage audiences online in conversations and discussions around the themes in the film. Fans can follow Ken Burns on Twitter @KenBurns or on Facebook at Facebook.com/KenBurnsPBS.

The Dust Bowl: An Illustrated History, written by Dayton Duncan with a preface by Ken Burns, will accompany the film. The book, which will be published by Chronicle Books, will be on sale in October.

THE DUST BOWL will be available on DVD and Blu-ray from PBS Distribution: ShopPBS.org; 800-PLAY-PBS, 24 hours a day, 7 days a week.

Funding is provided by Bank of America, Corporation for Public Broadcasting, The Arthur Vining Davis Foundations, Public Broadcasting Service, National Endowment for the Humanities, The Rockefeller Foundation, Wallace Genetic Foundation and members of The Better Angels Society, including the Dana A. Hamel Family Charitable Trust and Robert and Beverly Grappone.

About WETA WETA Washington, DC, is the third-largest producing station for public television and the flagship public broadcaster in the nation’s capital. WETA productions and co-productions include THE NEWSHOUR WITH JIM LEHRER, WASHINGTON WEEK WITH GWEN IFILL AND NATIONAL JOURNAL, AMERICA AT A CROSSROADS and IN PERFORMANCE AT THE WHITE HOUSE. Additionally, for more than 20 years, WETA has partnered with filmmaker Ken Burns to bring his landmark documentaries to the nation via public television, including the 2007 film THE WAR. Sharon Percy Rockefeller is president and CEO of WETA. More information on WETA and its programs and services is available at www.weta.org.

About PBSPBS, with its nearly 360 member stations, offers all Americans the opportunity to explore new ideas and new worlds through television and online content. Each month, PBS reaches nearly 123 million people through television and more than 21 million people online, inviting them to experience the worlds of science, history, nature and public affairs; to hear diverse viewpoints; and to take front-row seats to world-class drama and performances. PBS’ broad array of programs has been consistently honored by the industry’s most coveted award competitions. Teachers of children from pre-K through 12th grade turn to PBS for digital content and services that help bring classroom lessons to life. PBS’ premier children’s TV programming and its website, pbskids.org, are parents’ and teachers’ most trusted partners in inspiring and nurturing curiosity and love of learning in children. More information about PBS is available at pbs.org, one of the leading dot-org websites on the Internet, or by following PBS on Twitter, Facebook or through our apps for mobile devices. Specific program information and updates for press are available at pbs.org/pressroom or by following PBS Pressroom on Twitter. 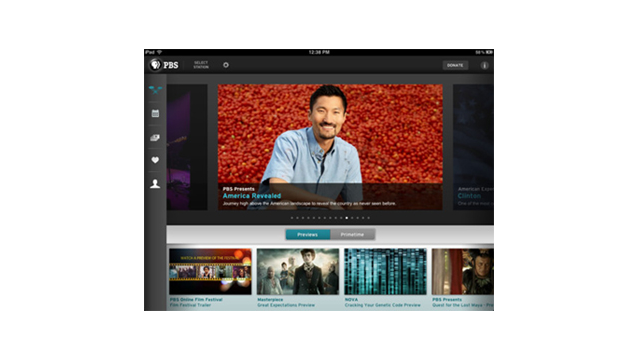