ARLINGTON, VA; NOVEMBER 15, 2016 – As family and friends gather around to celebrate the holidays, PBS offers a variety of special programming to create even more lasting memories. On Thanksgiving, PBS offers a delightful duet for family viewing with a new rendition of ANNE OF GREEN GABLES and a reprise of POLLYANNA. Martin Sheen stars as Matthew Cuthbert in the new adaptation of Lucy Maud Montgomery’s classic novel about the irrepressible orphan Anne (Ella Ballentine), airing Thursday, November 24, 8:00-9:30 p.m. ET. Another young orphan girl captures the hearts of family, friends and strangers alike in an adaptation of yet another children’s classic novel, POLLYANNA, airing 9:30-11:30 p.m. ET.

A special kind of family, the Nonnatus House sisterhood (and others) of the cherished CALL THE MIDWIFE series, celebrates Christmas this year in a wholly unexpected way. When they receive an SOS call from a tiny mission hospital that’s understaffed, underfunded and threatened with closure, they travel to South Africa to save Hope Clinic and make a difference in the lives of the people who use it. CALL THE MIDWIFE HOLIDAY SPECIAL debuts on Christmas day, Sunday, December 25, 7:30-9:00 p.m. ET.

For members of the military, the holidays can be particularly emotional, especially when they’re stationed thousands of miles away from home and family. LIDIA CELEBRATES AMERICA “Holiday for Heroes,” an uplifting special in which acclaimed chef and food ambassador Lidia Bastianich pays homage to the men and women of our military, preparing dinner for 250 active duty Navy troops aboard the USS George Washington, airs Friday, December 16, 2016, 10:00-11:00 p.m. ET.

Since Lidia won’t be the only one cooking for family during the holidays, PBS has scheduled two “Masterclass” marathons with Mary Berry and Paul Hollywood, THE GREAT BRITISH BAKING SHOW judges who take viewers through step-by-step re-creations of sweet and savory baked treats featured in the series. The special episodes air Saturday, November 19, 2016, 12:00-6:00 p.m. ET, and Saturday, December 17, 2016, 12:00-6:00 p.m. ET.

After Christmas, PBS waves farewell to 2016, journeying from New York to Austin. LIVE FROM LINCOLN CENTER “New York Philharmonic New Year’s Eve,” Saturday, December 31, 8:00-9:30 p.m. ET, rings in the new year with a night of American classics, including works by Rodgers & Hammerstein and featuring Joyce DiDonato. AUSTIN CITY LIMITS counts down the minutes to 2017 with “ACL Hall of Fame New Year’s Eve” as Bonnie Raitt, B.B. King and Kris Kristofferson are inducted into the Hall of Fame. The program airs 11:00 p.m. to12:00 a.m. ET.

A marathon presentation of six “Masterclass” episodes, including a special Christmas class, features celebrity chefs and BAKING SHOW judges Mary Berry and Paul Hollywood, who take viewers through step-by-step re-creations of sweet and savory baked treats featured in the series.

Savor a new adaptation of the classic novel about the orphaned Anne, placed in the care of uptight Marilla and her brother Matthew, played by Martin Sheen. Neither Anne nor Marilla could predict the profound effect they’d have on each other’s lives.

Join host Lidia Bastianich for an unforgettable holiday special celebrating veterans, who discuss the importance of family during holidays, the challenges and sacrifices of their work and the pride they take in having defended our country.

As Poplar celebrates a white Christmas, Nonnatus House receives an SOS call from a tiny mission hospital in the Eastern Cape that is understaffed, underfunded and threatened with closure. Transported to South Africa and facing some of their toughest challenges, the Nonnatus family digs deep to save Hope Clinic and make a difference in the lives of the people who use it.

Ring in the new year with a night of American classics, including beloved works by Rodgers & Hammerstein, featuring Joyce DiDonato with the New York Philharmonic, live from David Geffen Hall, the orchestra’s home at Lincoln Center.

Enjoy an adaptation of the children’s classic novel Pollyanna, about the young orphan whose effortless charm captures the hearts of family, friends and strangers alike and who believes that a little positive thinking can make a big difference.

FRONTLINE presents the epic story of the rise of Christianity. Drawing upon sometimes controversial historical evidence, the series transports viewers back 2,000 years to the time and place where Jesus of Nazareth once lived and preached and challenges familiar assumptions and conventional notions about the origins of Christianity.

Join Vivian Howard for a taste of the holidays as she serves up the best of her Southern heritage and the Chanukah traditions of husband Ben. Sample simple corned ham, upscale oyster dressing, humble Hoppin’ John, elegant red velvet cake and more.

Freddie (Ian McKellen) and Stuart (Derek Jacobi) host a holiday soiree in their small central London flat. Ash (Iwan Rheon), their young upstairs neighbor, has volunteered to cook the meal, their feisty best friend Violet (Frances de la Tour) is up to her old tricks, and a wicked game of Truth or Dare brings up hidden truths — and surprises as well.

Enjoy Charles Dickens’ classic, adapted from the original for orchestra, choir and soloists. The celebration of storytelling and ensemble performances provides the comforts of a classic tale with the thrill of experiencing the story in a new way.

See how pride and mischief inspire Chinese immigrant Tom to challenge his American neighbors to survive Christmas without Chinese products. Accepting the mission-impossible, the Jones family is drawn into an intercultural exchange with Tom’s family.

PBS Education helps teachers bring the holiday season into the classroom by offering a wide range of instructional resources on PBS LearningMedia. This includes animated video shorts, lesson plans and interactives that help students in grades preK-12 expand their awareness of global cultures and gain a deeper understanding of the origins of current-day celebrations.

Teachers can access holiday content through a keyword search in PBS LearningMedia — or explore curated collections like All About the Holidays, which delves into the history of Thanksgiving, Hanukkah, Christmas, Kwanza and New Year’s Day, among other notable events. In addition to student-centric activities, this collection also includes word searches, reading guides, and a mix of holiday-inspired content from familiar PBS KIDS shows. Elementary school teachers can also access a complementary, holiday-themed iBook with resources aligned to the National Curriculum Standards for Social Studies.

Most programs will be available to stream for free after broadcast on PBS.org, via the PBS apps for iOS and Android devices and via station-branded digital platforms including Roku, AppleTV, Amazon Fire TV and Chromecast.

About PBS
PBS, with nearly 350 member stations, offers all Americans the opportunity to explore new ideas and new worlds through television and online content. Each month, PBS reaches more than 100 million people through television and over 33 million people online, inviting them to experience the worlds of science, history, nature and public affairs; to hear diverse viewpoints; and to take front row seats to world-class drama and performances. PBS’ broad array of programs has been consistently honored by the industry’s most coveted award competitions. Teachers of children from pre-K through 12th grade turn to PBS for digital content and services that help bring classroom lessons to life. PBS’ premier children’s TV programming and its website, pbskids.org, are parents’ and teachers’ most trusted partners in inspiring and nurturing curiosity and love of learning in children. More information about PBS is available at www.pbs.org, one of the leading dot-org websites on the Internet, or by following PBS on Twitter, Facebook or through our apps for mobile devices. Specific program information and updates for press are available at pbs.org/pressroom or by following PBS Pressroom on Twitter. 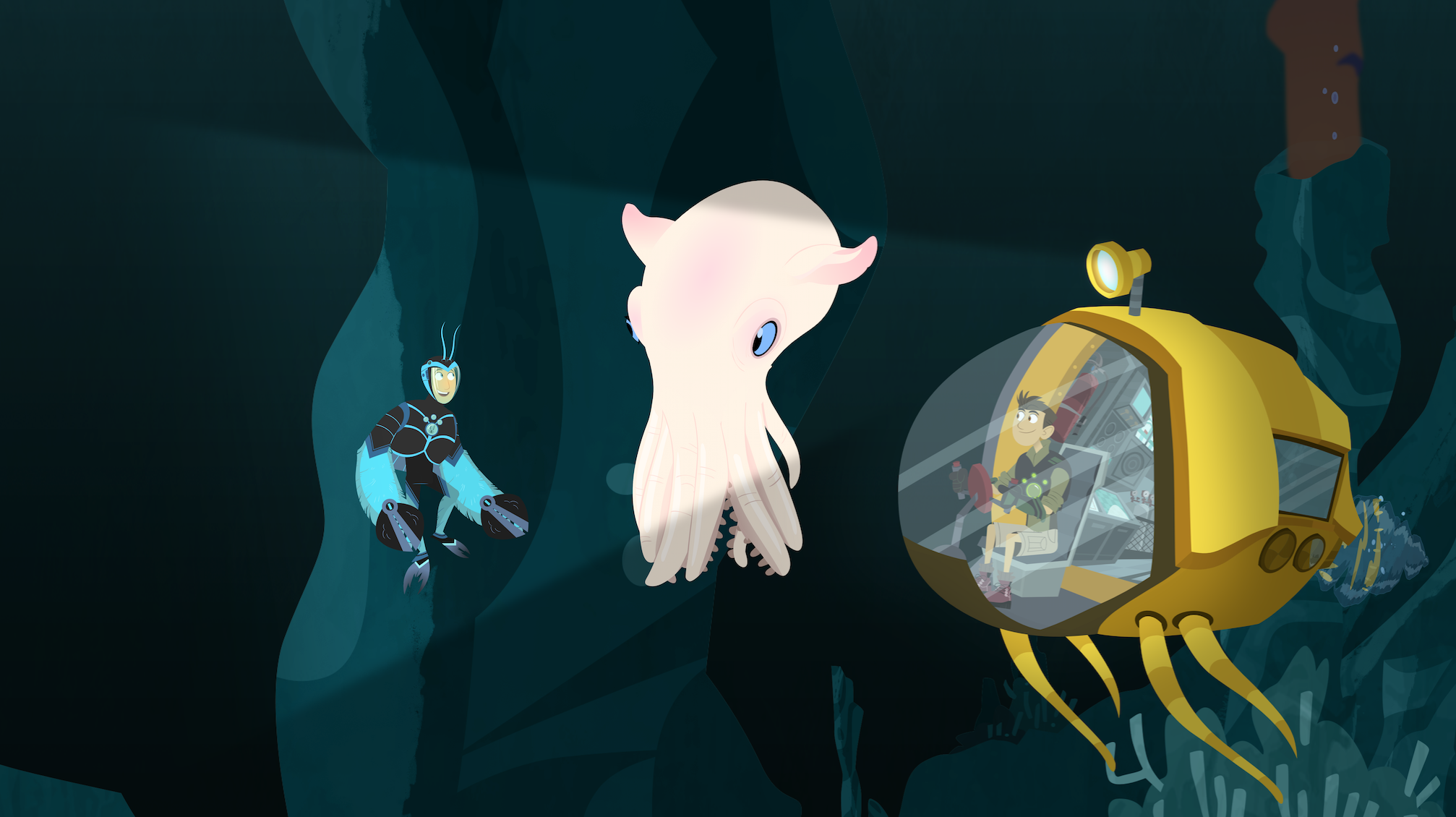