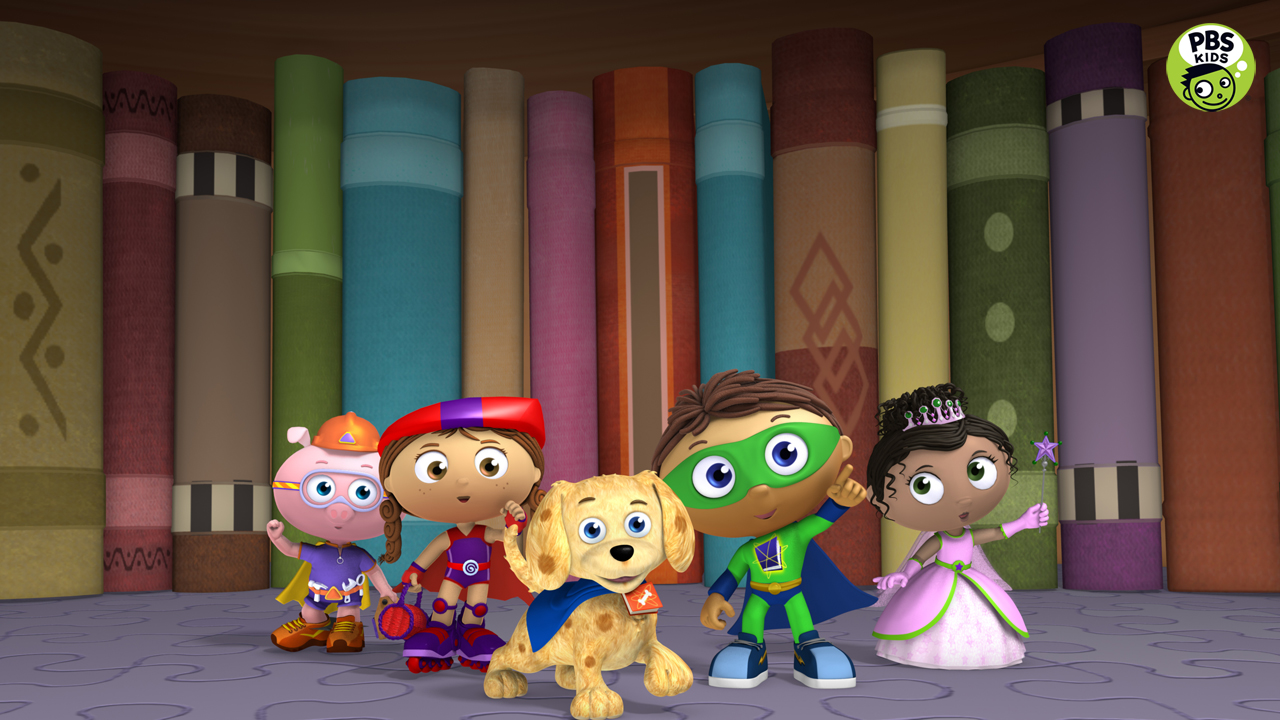 “With a brand-new slate of episodes, SUPER WHY! will delight families with entertaining, engaging stories just in time for the back-to-school season,” said Linda Simensky, Vice President, Children’s Programming, PBS. “In this mystery-themed week, viewers will join the Super Readers as they solve puzzles and explore their origin stories, and gain the power to read along the way.”

SUPER WHY!’s all-new week will kick off on Monday, August 17, with five episodes. More episodes of SUPER WHY! will premiere on PBS KIDS later in the year, including a literacy-themed week starting September 21 and a Hanukkah-themed episode during the holiday season. New clips and full episodes will be available on pbskids.org and the PBS KIDS Video App starting on August 17 and throughout fall 2015.

New digital content for SUPER WHY! will also launch this fall, including a mobile-friendly website and mobile-friendly games featuring the Super Readers and focusing on early literacy skills. PBS KIDS offers five apps from the series, designed to help children develop a variety of important literacy skills and encouraging a love of reading. More information on PBS KIDS’ SUPER WHY! apps is available at pbskids.org/apps.

“The Story of the Super Readers” – premieres Monday, August 17

Whyatt can’t wait to show his new comic book to his friends, but it’s missing!

Pig’s lemonade stand is sabotaged when someone keeps taking his lemons.

Pig has to search all around to find the missing piece of his puzzle.

When Whyatt’s game is missing, he learns to remember details and gather evidence to find answers.

Reading is power and SUPER WHY! is the only preschool property created to help kids learn the fundamentals of reading through interactive storybook adventures. Produced by Out of the Blue Enterprises in conjunction with DHX Media, the series has a groundbreaking multimedia aesthetic — with a winning combination of two- and three-dimensional animation formats, relatable and engaging characters, and immersive environments. The program represents a novel approach to preschool educational television, featuring a team of superhero characters with reading powers, who jump into books to find answers to everyday preschool challenges. For more information on SUPER WHY!, visit pbskids.org/superwhy.

About Out of the Blue Enterprises

Out of the Blue Enterprises is a leader in children’s educational media, with a portfolio of breakthrough, interactive, and curriculum-based entertainment concepts that span a variety of viable platforms, including television, video, mobile apps, and consumer products. Out of the Blue creates and produces SUPER WHY!, the hit Emmy-nominated literacy series on PBS KIDS;  Creative Galaxy, a new interactive art series for Amazon Studios; Daniel Tiger’s Neighborhood, the animated series inspired by Mister Rogers’ Neighborhood; and Nickelodeon’s Blue’s Room;, and handles all licensing and merchandising activity for SUPER WHY! and DANIEL TIGER’S NEIGHBORHOOD. The company also develops top-rated mobile educational game apps, including SUPER WHY!, and Colorforms. Out of the Blue recently acquired the nostalgic Colorforms brand, with the intent to develop and expand across all media and toy platforms. Led by Co-Founders Angela C. Santomero, Creator of the hit preschool entertainment franchise, Blue’s Clues; and Samantha Freeman, a former Nickelodeon and toy industry executive, Out of the Blue aims to engage kids and families with age-appropriate, entertaining, and engaging learning experiences. www.outoftheblueenterprises.com