Chalk art reminds us that the pandemic won’t last forever

No one dares step on the 6-foot-long butterfly in the street. That is, if they choose to go outside at all.

As residents in Takoma Park, Maryland, practice social distancing during the pandemic, the giant butterfly — wings filled in with red, yellow, orange and pink chalk — is there to remind everyone to stay 6 feet apart by illustrating a safe distance.

Chalk art can be a “brilliant tool for messaging,” said Chelsea Ritter-Soronen, creator of the colorful — and ephemeral — pavement mural and other works around the small city outside Washington, D.C.

Her murals have included messages to front-line workers as they travel to and from the nearby hospital. And there are also pieces of chalk art meant for the whole community: “Let us grow through what we go through,” one chalk ribbon reads on a street over the city limits into Washington.

Public art can be used as an economic driver, a space for commentary or simply a way to brighten someone’s day. Communities across the country have seen all three as people are coming up with new ways to connect, advertise and communicate in a kind of isolation many of us may not have seen before. 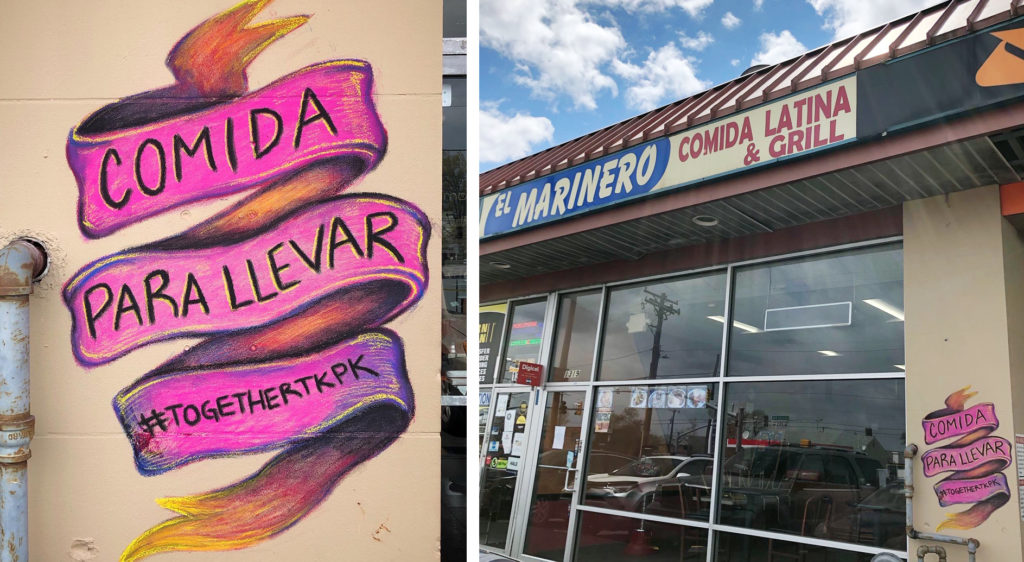 Ritter-Soronen’s chalk mural seen outside El Marinero, a El Salvadoran restaurant in Takoma Park, Maryland. In Spanish, the mural alerts people in the area that the business is open for takeout orders. Photos courtesy of Chelsea Ritter-Soronen/Chalk Riot

Takoma Park has also commissioned Ritter-Soronen’s business, Chalk Riot, to create murals that support small businesses, specifically for the 40 or so restaurants that are still taking takeout orders.

For El Marinero, a Salvadoran restaurant in town, she drew a hot pink ribbon on the restaurant that alerted people to “Comida para llevar.” A brown bag with “Takoma Park To-Go!” was drawn outside Cielo Rojo, a Mexican restaurant. There are arrows, too, that point people toward the businesses and urge people to “Support Local.” 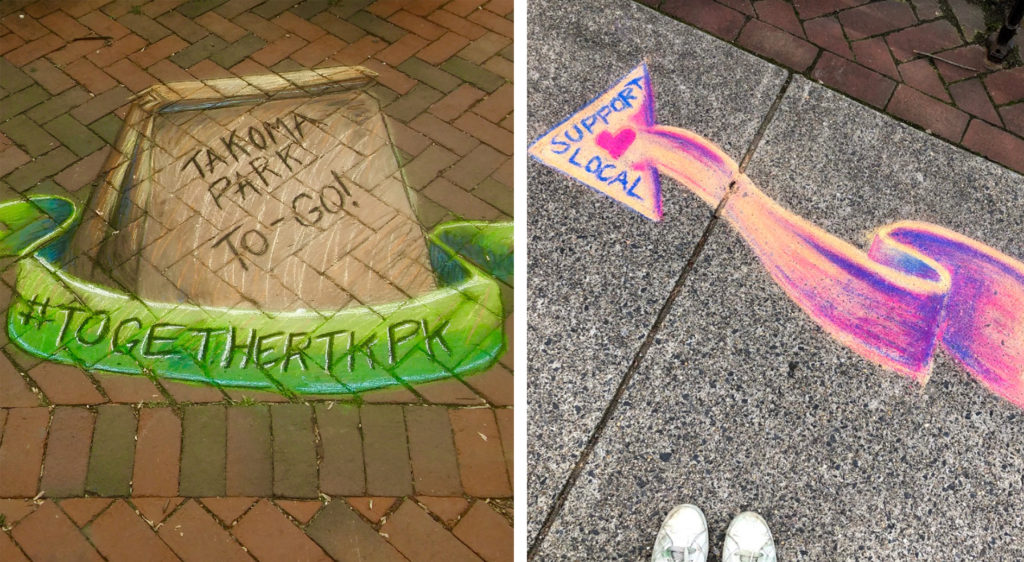 Ritter-Soronen said she started Chalk Riot with friend and colleague Liza Fishbone in Missouri in 2013. The business was “sparked out of our mutual love for public art, but not having many outlets for that in St. Louis,” she said.

But when it comes to creating site-specific permanent art works, Ritter-Soronen said, there can be a lot of red tape to navigate before you ever brush paint onto a wall. “So we said, ‘Where else can we take our art, if not walls?’ And then we found the chalk art community — and we fell in pretty deep.”

For seven years, Chalk Riot has turned pavement into canvas. And now they have plenty of company.

Even though fewer pedestrians are out due to social distancing, it hasn’t stopped residents from trying to connect with other community members by leaving messages on their own strip of sidewalk.

Fishbone, Ritter-Soronen’s business partner, is currently in Austin, Texas, drawing positive messages on the pavement there, some involving cartoony bubble creatures that kindly remind passersby about the 6-foot guideline.

Around the country, people are using colorful mosaics to transform the ground into stained glass windows. While the harbingers of spring — bees, flowers, birds — make their seasonal debut, chalk depictions are decorating neighborhoods as well. Colorful directives tell the virus to “stay away,” and remind everyone to “spread love and kindness, not COVID-19.” (A chalk message in Rehoboth Beach, Delaware, shows a red heart being smeared over a piece of toast.) With schools closed, children have more time to use the sidewalk to draw their favorite Disney characters, do their trigonometry homework or create snaking hopscotch courses.

There’s humor, too: “I’m reading a book about anti-gravity. It’s impossible to put down,” someone wrote in Portland, Oregon. And a plaintive yet jokey plea from Watauga, Texas: “Please Send Wine.”

If you’ve captured a cool or interesting chalk message amid this crisis, share the photo to the Canvas arts Facebook group here.

“After dedicating our lives [to] preaching how sidewalks are the ultimate canvas, all of a sudden the entire world is recognizing it,” Ritter-Soronen said. In the long run, “hopefully cities and residents recognize the unique opportunities to use public space in creative ways that maybe were not thought of before.”

Or, as one chalk message said in Woodbridge, Virginia, “Social distancing does not have to mean social isolation.” 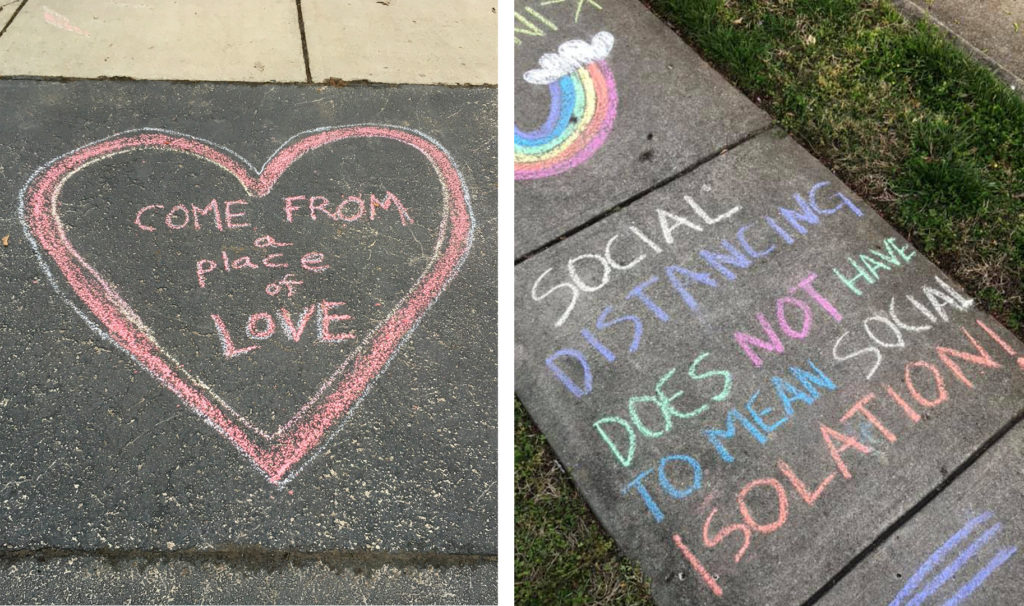 While stay-at-home orders keep people from gathering, Rabbi Rachel Silverman said she feels “very cut-off” from her congregation at Temple Israel of Sharon in Massachusetts.

“My entire career is based on building in-person, deeper relationships, and I can’t do that anymore,” she said.

As with other faith communities, Silverman’s temple is working on how to stay connected. Much of the normal face-to-face communication is now being done over Zoom or by phone, “but it’s not the same thing. At all,” Silverman said.

So Silverman has also turned to chalk. She put out a callout for a “round robin” of chalk messages, asking whether any of her congregants wanted to leave a temporary — but no less needed — pick-me-up for others, or wanted to receive one themselves. 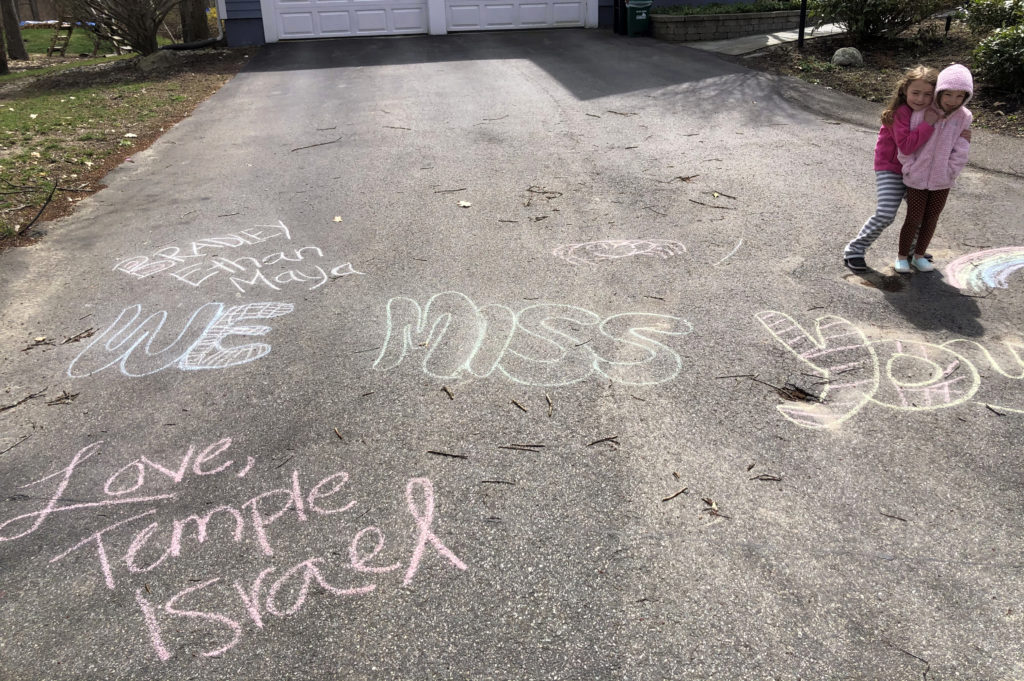 Jessica Yudewitz and her two daughters left a message in another congregant’s driveway this week: “We Miss You. Love, Temple Israel.”

Part of the effort was to give young families something to do together, Silverman said, but to also help bring a smile to somebody else.

“It’s a gift to both sides of the equation,” Silverman said.

Ritter-Soronen said she hopes her effort — a collaboration between civil and creative entities — can serve as a model for other cities where small businesses are taking a financial hit. She said she plans on making her chalk murals in Takoma Park until early June; right now she’s making chalk murals for about five to seven restaurants per week. The city’s economic development department, as part of this campaign, has also established a mini-grant program and collaborated with letterpress shop No Plan Press to help raise money for local businesses affected by the pandemic.

Chalk Riot isn’t immune to the economic effects. They’ve lost at least 17 paid projects in the past few weeks.

“The more that we can recognize that artists are small businesses, the better,” Ritter-Soronen said, adding that the city’s investment in artists is recognition that artists are going to be out of work, too — even when there’s always more work to be done. 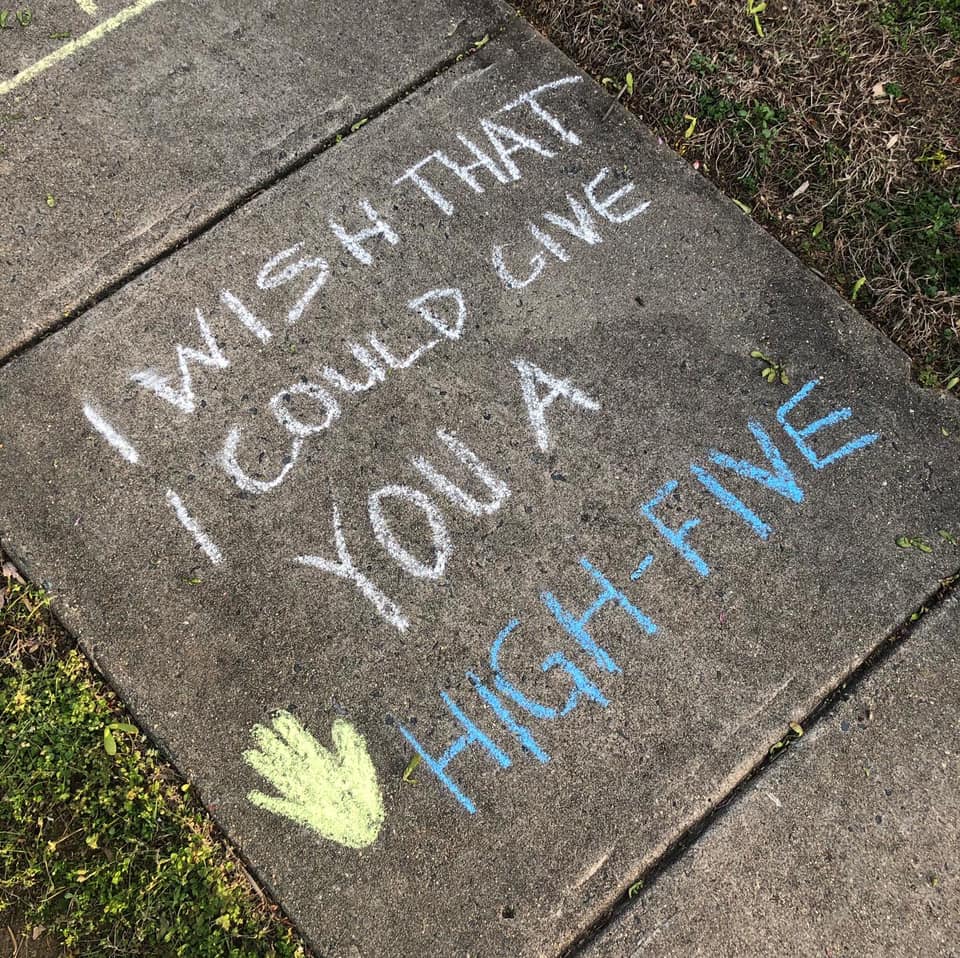 For all their beauty and good vibes, these chalk messages are fleeting. Heavy rain washed away Ritter-Soronen’s butterfly and countless other chalky creations.

“Can you seal it?” (and make it permanent) is a question that Ritter-Soronen said she hears a lot. Also: “Are you sure you got the photos?” Sometimes she talks with strangers about why we want the chalk art to last.

“During this pandemic, [the chalk art has] been a beautiful reminder to many that nothing lasts and that this [crisis], too, will pass,” she said.

Until then, another chalk message comes to mind: “I wish that I could give you a high five.”

Accentuating the positive with #SongsOfComfort