‘The human capacity to carry many things at once’

Poet Ada Limón’s “The Carrying” is about the contradictory joys and burdens we all carry.

“It could be the weight of history, it can be the weight of the current moment, it can also be joy and love,” Limón said. “I wanted to point to the human capacity to carry many things at once.” 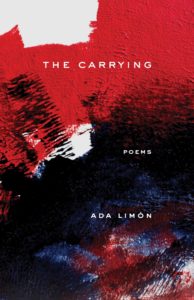 Limón wasn’t expecting her fifth book to be so deeply personal — she says it’s her “most autobiographical work” — but as the poems flowed, she realized she was working through her own issues, like her struggles with fertility.

The societal connection between womanhood, motherhood and power is at the core of her work, which explores what she says is a “privilege” bestowed upon those with the ability to have children. To her, “even the word ‘infertile’ implies a powerlessness.”

In the poem “Maybe I’ll Be Another Kind of Mother,” Limón reexamines this privilege and owns “the idea of what is it like to be child-free and … [to] see that as another, freer future, as opposed to something that was lesser to the preferred state of womanhood.”

Her poems became mechanisms to work through the contradictory burdens she carried while trying to conceive — hopeful, yet confused as to why some consider a childless existence to be inferior. In “Trying,” she writes:

Even now, I don’t know much
about happiness. I still worry
and want an endless stream of more, but some days i can see the point
in growing something, even if
it’s just to say i cared enough.

For Limón, carrying both the joys and sorrows of a child-free life is a testament to the human ability to exist with many things piled on our shoulders at once.

Anxiety over politics is another mental burden she fleshes out, both the “weight of history” and the current political moment. But she said it’s difficult to write books that are so overtly political these days, wishing to steer away from polemic rants. She doesn’t have answers, only questions. Like what, for instance, do we heft “with us when we raise our own flag?”

In “A New National Anthem,” she alludes to the controversial third verse of the national anthem — which was removed from popular use in the 1930s — which has been interpreted as celebrating the death of freed slaves who chose to fight with the British against the Americans in the War of 1812. It’s a reference that made headlines during NFL player Colin Kaepernick’s peaceful protests against racial injustice during the anthem at football games.

And what of the stanzas
we never sing, the third that mentions “no refuge
could save the hireling and the slave”? Perhaps,
the truth is, every song of this country
has an unsung third stanza, something brutal
snaking underneath us as we blindly sing
the high notes with a beer sloshing in the stands
hoping our team wins.

The politics of being a writer of color — and the trap of tokenism therein — are also sharply criticised in “The Contract Says: We’d Like the Conversation to be Bilingual:”

When you come, bring your brown-
ness so we can be sure to please

the funders. Will you check this
box; we’re applying for a grant.

Do you have any poems that speak
to troubled teens? Bilingual is best.

While not every reader will relate to the themes in “The Carrying,” Limón said it is our shared weight that connects us.

“My biggest concern is to get at our ordinary truths, our daily truth, the things that connect us all,” she said. “We’re all in this together.”

Listen to Ada Limón’s readings for PBS NewsHour and read a selection from “The Carrying” below:

The Contract Says: We’d Like the Conversation to be Bilingual
BY ADA LIMÓN

When you come, bring your brown-
ness so we can be sure to please

the funders. Will you check this
box; we’re applying for a grant.

Do you have any poems that speak
to troubled teens? Bilingual is best.

Would you like to come to dinner
with the patrons and sip Patrón?

Will you tell us the stories that make
us uncomfortable, but not complicit?

Don’t read the one where you
are just like us. Born to a green house,

garden, don’t tell us how you picked
tomatoes and ate them in the dirt

watching vultures pick apart another
bird’s bones in the road. Tell us the one

kind did. Tell us how he came
to the meeting wearing a poncho

and tried to sell the man his hubcaps
back. Don’t mention your father

again about the poncho, the hubcaps,
how he stole them, how he did the thing

he was trying to prove he didn’t do.

Ada Limón, “The Contract Says: We’d Like The Conversation To Be Bilingual” from The Carrying. Copyright © 2018 by Ada Limón. Reprinted by permission of Milkweed Editions.

Ada Limón is the author of “Lucky Wreck” (2006), “This Big Fake World” (2006), “Sharks in the Rivers” (2010), “Bright Dead Things” (2015) and “The Carrying” (2018), a finalist for the National Book Award and the National Books Critics Circle Award. She earned an MFA from New York University, and is the recipient of fellowships from the New York Foundation for the Arts, the Provincetown Fine Arts Work Center, and the Kentucky Foundation for Women. Her work has appeared in numerous publications including The New Yorker, the Harvard Review, Pleiades, and Barrow Street. Limón is on faculty of the Queens University of Charlotte Low Residency M.F.A program and the 24Pearl Street Online Program for the Provincetown Fine Arts Work Center. She splits her time between Kentucky, California, and New York.