Many families and stores rely on SNAP benefits. The shutdown may pinch them both

For seven years, single mother Katie Cornell-Poulter has gone through college, worked toward a master’s degree in social work, and interned connecting vulnerable households in Albuquerque, New Mexico, with needed food and medical supplies. To make ends meet in her own home, she has relied on $360 each month in federal food benefits under the Supplemental Nutrition Assistance Program. But the very food pantries where she refers clients may be the ones she and her 11-year-old son could rely solely upon if the government shutdown continues and she loses her food stamps.

She plans to graduate in May, but Cornell-Poulter, 36, said the federal government shutdown may jeopardize her access to food and ability to finish the degree that she has worked so hard to complete. 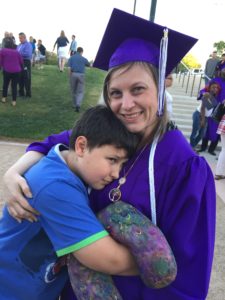 This month, the Trump administration said it would fund food stamp benefits for February, but the fate of funds in March is unclear if the government shutdown remains unresolved. Gridlock and strained relations between President Donald Trump and congressional Democrats suggest there is no end in sight.

“This government shutdown — I try not to think about it too much because those things can bring anxiety when I’m just trying to graduate,” Cornell-Poulter said — she cannot fathom what choices families like hers will confront if those benefits stay in limbo.

The needs of Cornell-Poulter’s household reflect many others that receive SNAP benefits. In 2013, the U.S. Department of Agriculture reported roughly a third of households that received SNAP benefits had jobs and earned work income. Forty-four percent of recipients are children under age 18, according to federal data.

Where does that leave an estimated 38 million Americans who rely on the nation’s largest safety net program for food and nutrition? Families, food banks, retailers, health and poverty advocates and various stakeholders throughout the food supply chain nationwide are watching the issue closely for any early signals of what to expect and how to prepare for the worst-case scenario.

Many families that receive food stamp benefits live paycheck to paycheck and don’t have cash reserves to patch through, said Diane Schanzenbach, an economist and director at the Institute for Policy Research at Northwestern University and senior fellow at the Brookings Institution.

READ MORE: How Americans are stepping up during the shutdown

Delaying food benefits even by two or three days “will cause material hardship for these families” and their children, she said.

That is no less true in New Mexico, where Cornell-Poulter and her son are among more than 450,000 people — one out of five residents — who receive SNAP benefits. That’s among the highest percentages in the nation. And in their state, as many as 70 percent of SNAP recipients are children, according to New Mexico Center on Law and Poverty.

Delaying food benefits even by two or three days “will cause material hardship for these families.”

Already uncertainty caused by the shutdown is rippling across New Mexico.

Denise Miller serves as the executive director for the New Mexico Farmers’ Marketing Association, which helps ensure that SNAP recipients have access to fresh fruits and vegetables. Recently, she climbed into a car to drive from Sante Fe to Espanola — a town 25 miles north where a majority of residents receive SNAP benefits — and to check on local farmers.

So far, it is early in the growing season, so farmers aren’t yet bracing for bad news, Miller said. Behind the wheel was Michael Venticinque, the organization’s value chain coordinator. He said that across New Mexico, retailers are more worried than anybody. In Espanola, Venticinque estimated as much as 60 percent of grocery sales come from food stamp recipients, the loss of which could affect many more people.

Grocers around the country are keeping an eye on how SNAP funding could hit their bottomline. In Albuquerque, Rob Ortman owns the Silver Street Market, a local grocery store that prides itself on selling produce grown on nearby farms. Across Bernalillo County, more than 134,000 residents — one out of five residents — rely on SNAP benefits to keep enough food in their homes.

Ortman feels optimistic SNAP benefits will be fully funded, he said, and was reassured after the Trump administration announced plans to clear payments through the end of February. But he said he doesn’t have a back-up plan if the federal shutdown drags on without restored funding for food stamps.

“You’ll have to get back to me at the end of February,” he said.

Since the government shutdown took effect on Dec. 21, 95 percent of federal USDA employees were furloughed from the Food and Nutrition Service, which oversees the food stamp program. That means no one is available to process licenses for grocery stores to accept SNAP benefits if the stores were were opened or purchased after the shutdown began.

Another 2,500 grocers with lapsed licenses are unable to update their paperwork — and cannot honor food stamps as a result. In a statement to the PBS NewsHour, a USDA spokesperson said these overdue licenses account for less than 1 percent of grocery stores nationwide.

This is one way the shutdown is putting a pinch on local economies, the National Grocers Association wrote in a Jan. 10 letter to Congress.

“Simply put, this shutdown is hurting Main Street grocers who are focused on growing their businesses and creating new jobs,” the trade organization wrote.

In New Mexico, food banks are also figuring out what they will need to do to meet mounting demand, said Sovereign Hager, legal director for the New Mexico Center on Law and Poverty. Seven out of 10 food stamp recipients also rely on food banks and food pantries because food purchased with their SNAP benefits rarely covers the entire month.

“People are angry that…something as basic as food for kids would be threatened because of the desire for a border wall,” Hager said.

“People are angry that…something as basic as food for kids would be threatened because of the desire for a border wall.”

On a Friday afternoon, the time when Cornell-Poulter normally completes homework after she’s worked four 10-hour days toward her graduate school internship, she considered what she would do if SNAP benefits run dry.

The added scramble to get enough healthy food for her son and her would eliminate her time to help her son with his homework and cut into her own study time. And she would have to lean more heavily on her mother for food.

To get as far as she has in her education on her own, Cornell-Poulter says she had “an immense amount of help from the government.” But losing vital benefits takes away opportunity to improve her life. In other words, without food stamps, “people couldn’t do what I’m doing,” she said.