CHICAGO — The U.S. death toll from the coronavirus eclipsed Italy’s for the highest in the world Saturday at about 20,000, as Chicago and other cities across the Midwest braced for a potential surge in victims and moved to snuff out smoldering hot spots of contagion before they erupt.

With the New York area still deep in crisis, fear mounted over the spread of the scourge into the nation’s heartland.

Twenty-four residents of an Indiana nursing home hit by COVID-19 have died, while a nursing home in Iowa saw 14 deaths. Chicago’s Cook County has set up a temporary morgue that can take more than 2,000 bodies. And Chicago Mayor Lori Lightfoot has been going around telling groups of people to “break it up.”

Around the world, meanwhile, European countries used roadblocks, drones, helicopters, mounted patrols and the threat of fines to keep people from traveling over Easter weekend. And with infections and deaths slowing in Italy, Spain and other places on the Continent, governments took tentative steps toward loosening the weeks-long shutdowns.

“Don’t do silly things,” said Domenico Arcuri, Italy’s special commissioner for the virus emergency. “Don’t go out, continue to behave responsibly as you have done until today, use your head and your sense of responsibility.” 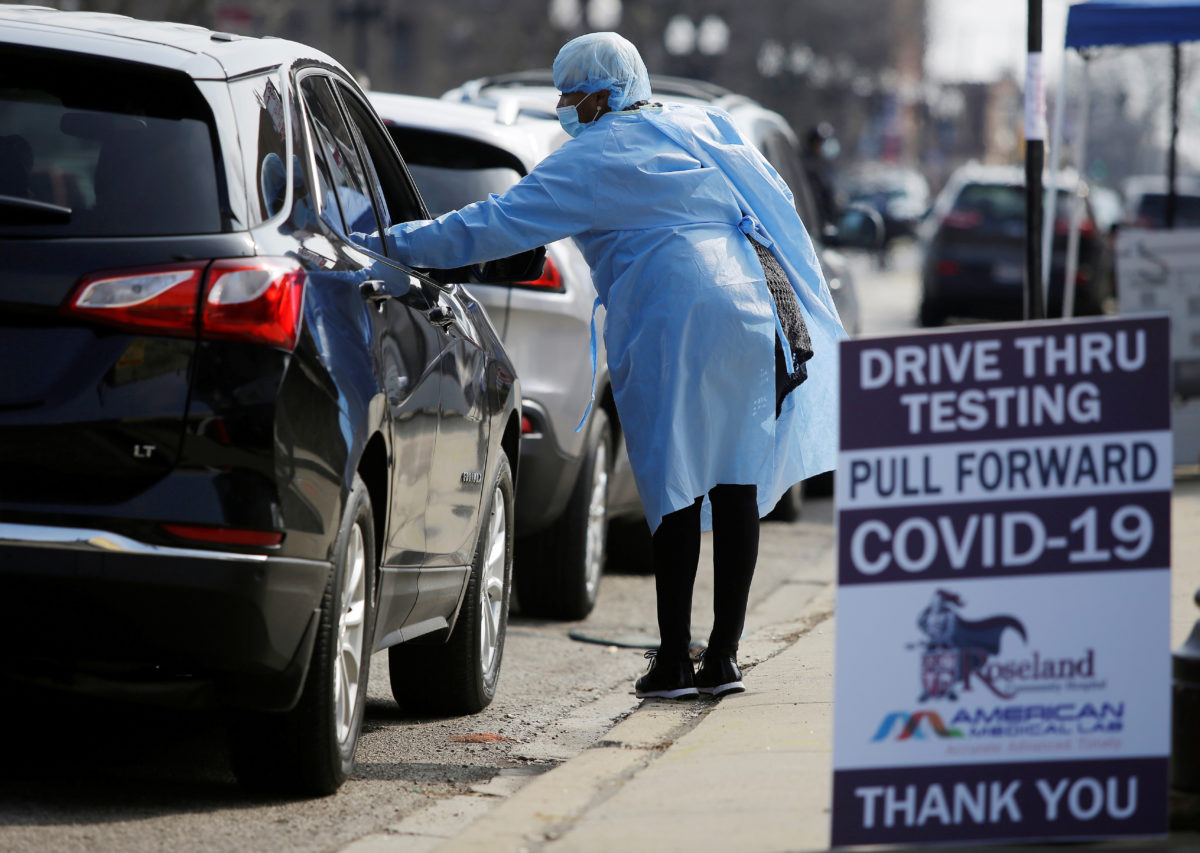 A medical worker speaks to motorist waiting in line to receive testing during the global outbreak of coronavirus disease (COVID-19) outside Roseland Community Hospital in Chicago, Illinois, U.S., April 7, 2020. Photo by Joshua Lott/Reuters.

The outbreak’s center of gravity has long since shifted from China to Europe and the United State s, which now has by far the largest number of confirmed cases — a half-million — and a death toll higher than Italy’s count of nearly 19,500, according to the tally kept by Johns Hopkins University.

The death rate — that is, the number of dead relative to the population — is still far higher in Italy than in U.S., which has more than five times as many people. And worldwide, the true numbers of dead and infected are believed to be much higher because of testing shortages, different counting practices and concealment by some governments.

About half the deaths in the U.S. are in the New York metropolitan area, where hospitalizations are nevertheless slowing and other indicators suggest lockdowns and social distancing are “flattening the curve” of infections and staving off the doomsday scenarios of just a week or two ago.

New York state on Saturday reported 783 more deaths, for a total over 8,600. Gov. Andrew Cuomo said the daily number of deaths is stabilizing “but stabilizing at a horrific rate.”

“What do we do now? We stay the course,” said Cuomo, who like other leaders has warned that relaxing restrictions too soon could enable the virus to come back with a vengeance.

With authorities warning that the crisis in New York is far from over, Mayor Bill de Blasio announced that the city’s 1.1 million-student school system will remain closed for the rest of the academic year. But Cuomo said the decision is up to him, and no such determination has been made.

In the Midwest, pockets of contagion have alarmed state and city leaders and led to stricter enforcement.

Nearly 300 inmates at the Cook County Jail have tested positive for the virus, and two have died. In Wisconsin, health officials expect to see an increase in coronavirus cases after thousands of people went to the polls during Wisconsin’s presidential primary Tuesday.

Michigan’s governor extended her state’s stay-at-home order with new provisions: People with multiple homes may no longer travel between them.

And in Kansas, the state Supreme Court heard arguments in a dispute Saturday between Democratic Gov. Laura Kelly and Republican lawmakers who overturned her executive order banning religious services and funerals with more than 10 people.

Elsewhere around the world, Italian authorities set up roadblocks around Milan to discourage people from going on Easter weekend trips. British police kept a close watch on gatherings in parks and at the seaside on one of the hottest days of the year. And France deployed some 160,000 police, including officers on horseback who patrolled beaches and parks.

“It’s useless to pack your bags for a vacation,” Paris police tweeted.

With religious leaders around the globe urging people to observe Easter safely at home, not in church, the archbishop of Turin, Italy, allowed a video streaming display of the Shroud of Turin, believed by the faithful to be the burial cloth of Jesus, so that they can pray in front of it during the epidemic.

Austria aims to reopen small shops on Tuesday. Spain, with more than 16,300 dead, plans to allow workers in some nonessential industries to return to factories and construction sites Monday. Spanish authorities said they will distribute 10 million face masks at major train and subway stations.

“We think that with these measures we will prevent a jump in infections,” Health Minister Salvador Illa said.

Italy continued to include all nonessential manufacturing in an extension of its national lockdown until May 3. But Premier Giuseppe Conte held out hope that some industry could re-open earlier if conditions permit.

Arcuri said that the exit from the lockdown will include increased virus testing, the deployment of a voluntary contact-tracing app and mandatory blood tests as Italy seeks to set up a system of ‘’immunity passports.’’

India extended its lockdown of the nation of 1.3 billion people by two more weeks. But Iran, the site of the worst outbreak in the Middle East, reopened government offices and businesses outside Tehran.

Britain on Saturday reported 917 more deaths, down from the peak of 980 recorded a day earlier. The country’s overall death toll neared 10,000. At the same time, data suggest that the number of hospital admissions in Britain is leveling off.

Prime Minister Boris Johnson, the first major world leader confirmed to have COVID-19, continued to recover at a London hospital, where he was able to take short walks, according to his office.

Worldwide, confirmed infections rose above 1.7 million, with over 100,000 deaths, according to Johns Hopkins. Close to 400,000 people have recovered.

For most people, the coronavirus causes mild or moderate symptoms, such as fever and cough. But for others, especially older people and those with health problems, it can cause severe symptoms like pneumonia.

Forliti reported from St. Paul, Minnesota. Moulson reported from Berlin. Associated Press journalists around the world contributed to this report.