What happened when the 1918 flu pandemic met WWI

When it comes to the Russian invasion of Ukraine, it is safe to say that no one wins if the conflict helps spread the coronavirus.

Before Russia’s forces began attacking its neighbor, both countries had just hit records in new daily cases, peaking at an all-time high in Ukraine in early February. On Feb. 24, the day Russian President Vladimir Putin launched the assault, there were more than 25,000 new confirmed cases in Ukraine, according to the World Health Organization. While infections had begun to fall before Russia’s invasion, for multiple days in the past week the global health agency had reported no official data from the country – perhaps a reflection of the chaos and violence that has sent more than 2 million refugees to flee to other countries and scrambled its health infrastructure. No one has any real idea of how the virus may be spreading now.

“Low rates of testing since the start of the conflict mean there is likely to be significant undetected transmission,” WHO Director-General Tedros Adhanom Ghebreyesus said during a news briefing on March 2. “Coupled with low vaccination coverage, this increases the risk of large numbers of people developing severe disease.” Just 35 percent of Ukrainians are fully vaccinated against COVID, while 50 percent of Russians are – both below the worldwide average.

On every level, it is unwise to declare war during a pandemic.

On every level, it is unwise to declare war during a pandemic. Infectious diseases have typically followed lines of humans engaged in travel, commerce and war. From the Civil War up until World War II, more soldiers died of infections than from bullets. Cholera, typhus fever, bubonic plague and other deadly microbes were all spread because germs also travel.

This was certainly the case with the influenza pandemic of 1918-1919, which was one of the worst contagion crises in the history of humankind. Around the world, anywhere from 40 to 100 million people died, according to various estimates, with 500,000 to 750,000 deaths in the United States alone. It was a particularly virulent and novel strain of influenza that attacked young adults most severely, in contrast to seasonal influenza’s typical victims, the very young and the elderly. 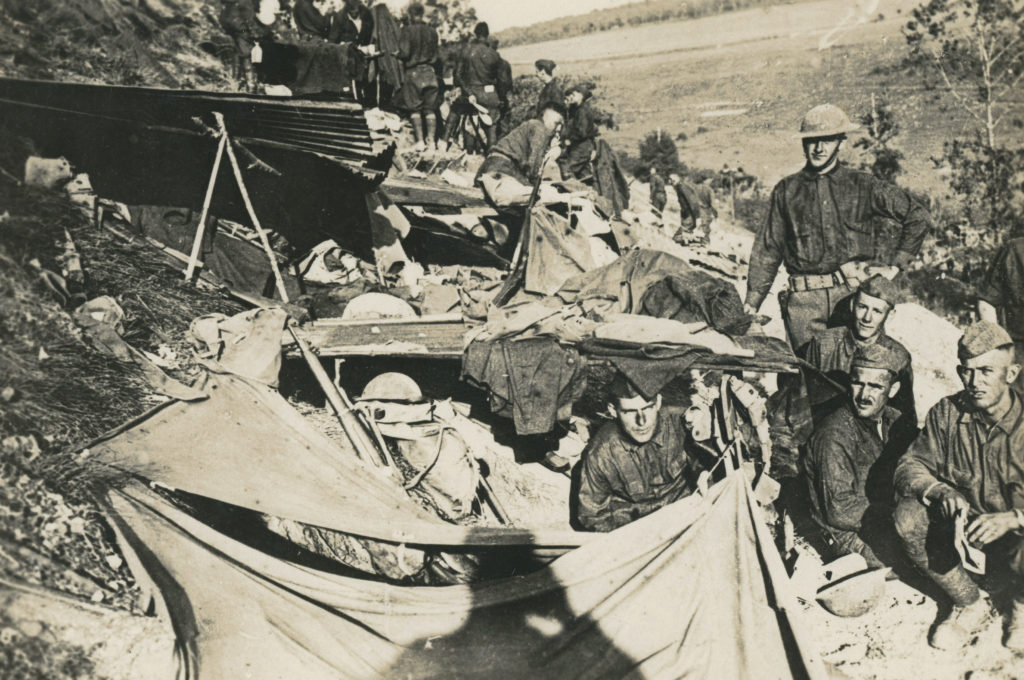 The United States entered World War I in 1918, four years into the conflict. In the months leading up, more than 4 million young men were sent to U.S. Army camps all over the country, traveling by train, cheek by jowl. They arrived to discover far-less-than-deluxe accommodations of crowded tents, dormitories, sloppy mess halls and poorly dug latrines. And when they were ready to ship out, they traveled—again by crowded trains—to the Atlantic seaboard where they boarded crowded troop ships taking them to the European theater, where many million more were already fighting. En route, many became seasick and vomited profusely; all of them slept in ridiculously close quarters, with the bunks resembling bookshelves stuffed with human cargo. Their destination was often the grimiest, filthiest trenches ever dug. To say troop conditions were not exactly sanitary is a gross understatement. Many of these young men were not only victims of influenza but terrific vectors for spreading microbes to others.

READ MORE: The ‘awful’ work of the real doctors who inspired M*A*S*H

There were three waves across the 1918-1919 pandemic, and another in the winter of 1920. During the second wave, which lasted from September to December of 1918, soldiers, sailors and even ambulance drivers were among the hardest hit groups on both sides of the Atlantic Ocean. In recent years, some have claimed to pinpoint the outbreak’s origin to this Army camp in Kansas or that foxhole in Marne, but such microbe-gazing is a parlor game and impossible to prove. When discussing the coronavirus in 2022, however, origin stories no longer matter nearly as much as asking where the virus is spreading now and how it continues to make millions of people ill, or worse.

Unlike our current era, nobody knew much about virology at all back in 1918, and didn’t know exactly what caused the flu. Scientists had a better hand on bacteriology, but many experts incorrectly thought influenza was caused by the bacterium Haemophilus influenzae (hence, the quaint Latin last name). They had no medications yet that would work against bacteria – no antibiotics, let alone antivirals that could have helped in the pandemic. There were no intravenous fluids, respirators or intensive care units; nurses and doctors were in short supply; and medical care was more a form of warehousing these young men and women than what we would expect today. Working at these overcrowded base hospitals, let alone finding yourself in one, was a nightmare.

The ill soldiers were “placed on cots until every bed is full and yet others crowd in.”

Modern medical knowledge has greatly advanced, but the conditions on the ground are still dire. The United Nations has warned that Ukraine’s health care system is in grave danger. “As increasing numbers of people are displaced, the increased risk of COVID-19 contagion, combined with growing numbers of injured people in need of emergency medical services, will put additional pressure on the country’s already-stretched health system,” the U.N. humanitarian agency wrote in a Feb. 26 report. On Wednesday, Ukrainian officials reported that Russia had bombed a maternity hospital in Mariupol, killing three and wounding more than a dozen people, including women waiting to give birth. Russia has attacked at least 18 medical facilities in two weeks, according to WHO.

During WWI, most of the soldiers who died from the pandemic did not just die of influenza but of secondary bacterial pneumonia. As these poor souls’ lungs filled up with fluid, immune cells, and bacterial detritus, they turned blue from the lack of oxygen, often bled from the nose and mouth and ultimately suffocated. 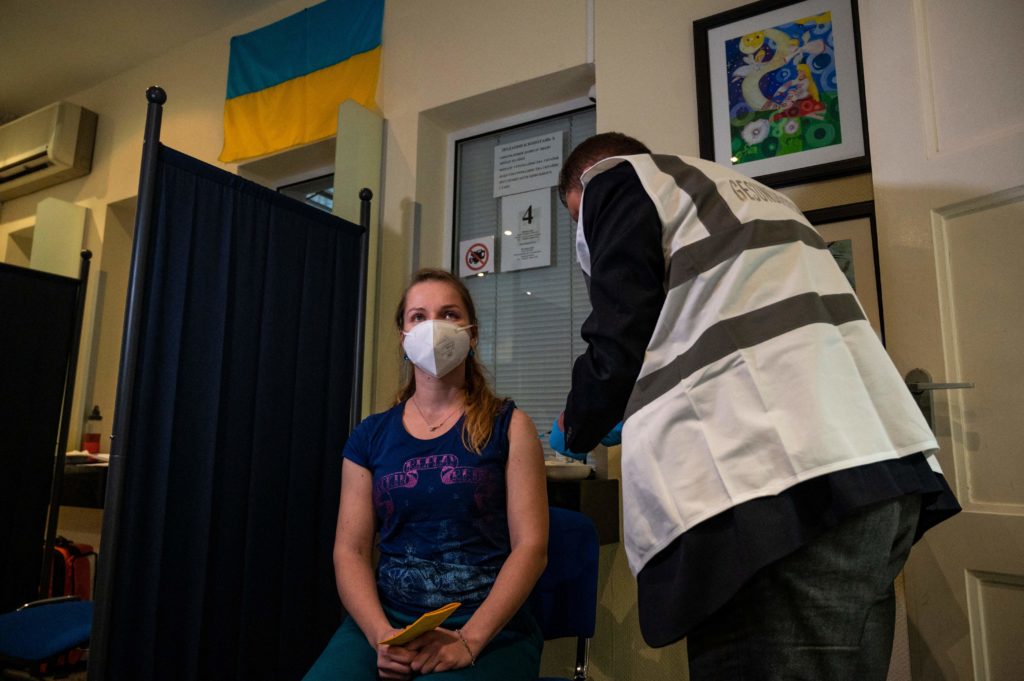 A Ukrainian woman from Zhytomyr receives a dose of COVID vaccine at the Ukrainian embassy in Berlin on March 10, 2022, as part of a campaign by local health authorities to inoculate people fleeing the war in Ukraine. Photo by JOHN MACDOUGALL/AFP via Getty Images

The ill soldiers were “placed on cots until every bed is full and yet others crowd in. The faces soon wear a bluish cast; a distressing cough brings up the blood-stained sputum. In the morning the dead bodies are stacked about the morgue like cord wood,” recalled a doctor named Victor C. Vaughan. Years after witnessing influenza among “the stalwart young men” under his care at Camp Devens, Vaughan graphically recalled the carnage in his 1926 autobiography, “A Doctor’s Memories.”

Then the dean of the University of Michigan Medical School, Vaughan knew what he was talking about when it came to epidemics and combat. He had toured Army hospitals in 1898 during the Spanish American War and even contracted the dreaded yellow fever while doing so.

READ MORE: How smallpox devastated the Aztecs – and helped Spain conquer an American civilization 500 years ago

But Vaughan never forgot the horror he experienced in 1918 as a helpless doctor with nothing in his black bag, save morphine, to alleviate suffering. “This picture was painted on my memory cells,” he later wrote, “the deadly influenza virus [that] demonstrated the inferiority of human inventions in the destruction of human life… This infection. like war, kills the young, vigorous, robust adults …The husky male either made a speedy and rather abrupt recovery or was likely to die.”

A weakened or ill fighting force does not help anyone’s cause. When mated with 21st century technology, the incursion could spread infection from COVID far more quickly than tanks can travel, not only among soldiers but also among the civilians victimized by war.

Left: An influenza Ward at U.S. Army Field Hospital No. 29, in Hollerich, Luxembourg, during WWI. Photo via Getty Images