At summer festivals, farmers markets, parks and rallies, volunteers with clipboards across Michigan are making a final push to collect signatures to put reproductive freedom on the November ballot.

The proposed constitutional amendment, “Michigan Right to Reproductive Freedom Initiative,” would protect “the right to make and effectuate decisions about all matters relating to pregnancy, including but not limited to prenatal care, childbirth, postpartum care, contraception, sterilization, abortion care, miscarriage management, and infertility care.”

WATCH MORE: Michigan Sen. Mallory McMorrow explains why she stood up to a culture war attack

A coalition called Michigan Reproductive Freedom for All — led by American Civil Liberties Union (ACLU) of Michigan, Michigan Voices, and Planned Parenthood Advocates of Michigan — had already been collecting petition signatures for months before the Supreme Court’s decision to overturn Roe v. Wade, but the ruling last week has sparked new momentum.

“The Supreme Court will not determine our future – Michigan voters will,” Ashlea Phenicie, director of communications at Planned Parenthood Advocates of Michigan, told the NewsHour. 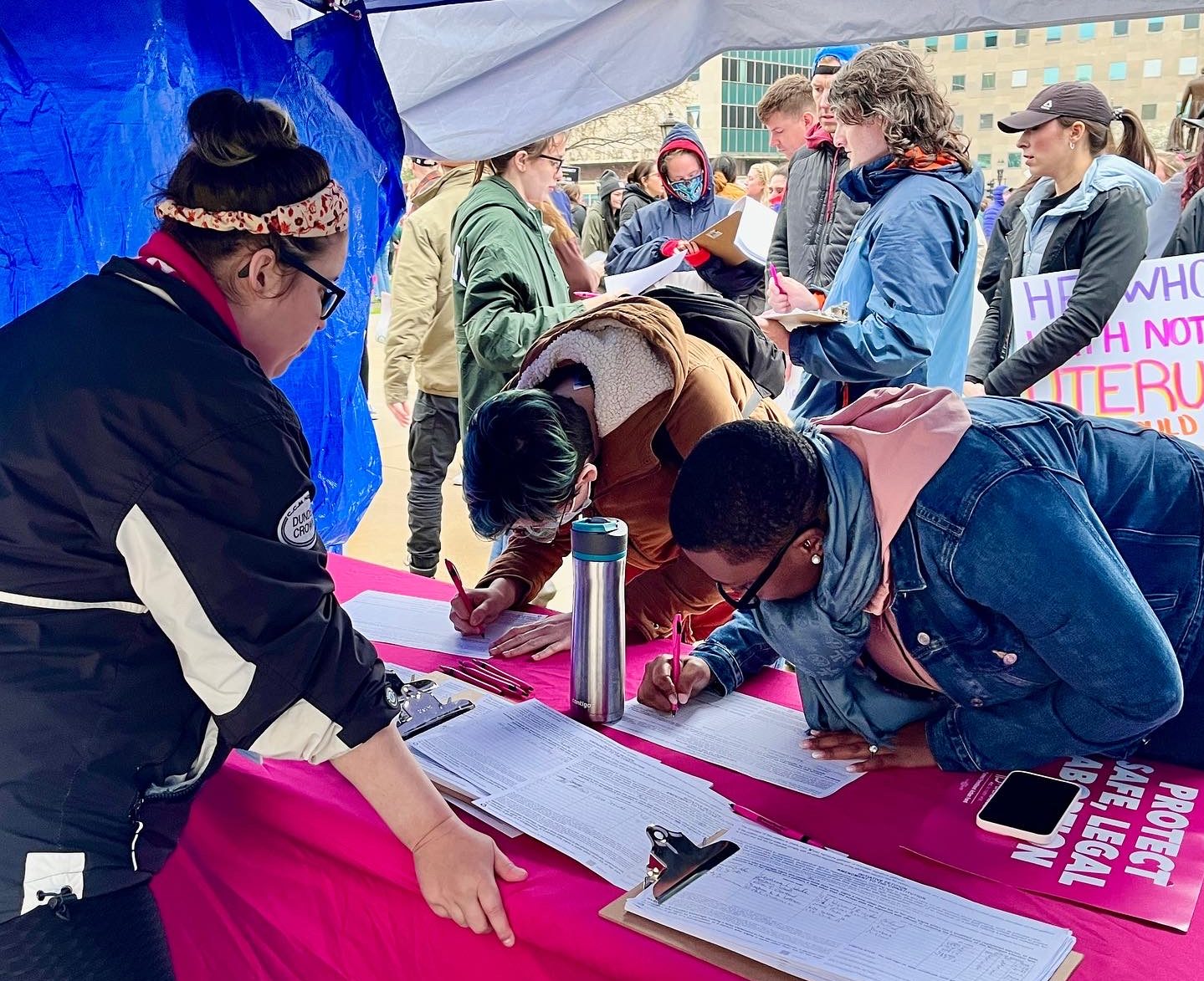 At least 425,059 signatures are required by July 11 to get on the November 2022 ballot. Organizers are trying to collect many more signatures, in case some signatures are challenged or rejected.

Michigan is one of several places across the country seeking to protect abortion rights as the question of legality returns to the states. But it’s also one of close to two dozen states with a law criminalizing the termination of a pregnancy. A 1931 law makes abortion a felony and the sale of medication for abortions a misdemeanor. It has not been used since Roe v. Wade was decided in 1973.

In mid-May, Michigan’s Court of Claims granted a temporary injunction to temporarily block enforcement. But that injunction is not permanent, and the law has still caused confusion in the wake of the high court’s decision, along with fear that it could be enforced in the future if it is not addressed. Republicans in the state legislature have already introduced legislation seeking to amend the law’s penalties, part of a push to explore “other avenues to protect the sanctity of human life,” state Rep. Steve Carra said in a statement.

“The time for cheap talk is over and the time for action is now,” he said.

In Michigan, a statewide survey of 600 registered voters conducted for the Detroit Regional Chamber in May 2022, a week after a leaked draft of the Supreme Court opinion, about 55 percent of voters supported leaving Roe v. Wade in place, while about a quarter supported overturning it.

“We know that a clear majority of Michiganders want abortion to remain legal,” Phenicie said. “This ballot measure will give them a voice.”

Michigan’s 1931 law makes abortion a felony for pregnant people and doctors or others who administers drugs or surgery in the process, and attaches a misdemeanor charge for those who sell medication used for abortions. The law as written has no exceptions for rape or incest. There is an exception that abortion can be peformed to save the life of the pregnant person, but if the pregnant person dies in the process, then the doctor is to be charged with manslaughter.

Anticipating the high court’s decision, Planned Parenthood of Michigan filed a lawsuit to protect abortion access in April – the month before the leaked draft of the Supreme Court decision foreshadowing the end of Roe – arguing that the 1931 law was unconstitutionally vague and that it violated the rights to liberty, bodily integrity, equal protection, and privacy under the Michigan Constitution and state civil rights laws.

The state court’s injunction on the law offers a temporary reprieve, but the action is not permanent. Right to Life of Michigan, an anti-abortion group, has filed an amicus brief in the case. Michigan Attorney General Dana Nessel has said that she will not enforce this 1931 law, however, she pointed out that there are 83 local county prosecutors who still could if the injunction were lifted.

Democratic Gov. Gretchen Whitmer also filed a lawsuit in May saying the law violated the due process and equal protection clauses of the Michigan Constitution. The governor seeks a positive declaration that the Michigan Constitution protects the right to abortion. After last week’s U.S. Supreme Court decision, Whitmer filed a motion and a notice to urge the Michigan Supreme Court to immediately consider her lawsuit to recognize a constitutional right to an abortion. Right to Life Michigan and Michigan Catholic Conference have filed a motion to intervene in this case.

Although many Michigan lawmakers and the attorney general reaffirmed that abortion is still legal in the wake of the Dobbs decision because of the preliminary injunction, there was still some confusion. Hours after Roe was overturned on Friday, Beaumont Health and Spectrum Health, the state’s largest health system, said it would no longer perform abortions except to save the life of the mother, then it reversed course the next day. On Monday, Michigan’s licensing and regulatory agency, LARA, clarified that it will not take action against any health professionals providing legal abortion while the current injunction is in place.

Whitmer has also instructed all state departments and agencies to not cooperate with authorities from other states who want to prosecute pregnant people seeking legal abortion care, and to increase protections for reproductive healthcare.

“Abortion is still legal in Michigan and our doors are open. Our health centers — with supportive doctors, nurses, and expert staff — continue to provide the care and resources patients have come to rely on,” Phenicie said.

Whitmer has pledged to “fight like hell to protect every Michigander’s right to make decisions about their own body with the advice of a medical professional they trust. I will not give in or give up for my kids, your kids, and the future of our great state.”

Michigan Republicans, who currently control both chambers of the Michigan Legislature, have introduced House Bill 6270, the Protection at Conception Act, which amends the 1931 law banning abortion. Introduced by Rep Steve Carra days before the U.S. Supreme Court made its decision, this bill specifies that the pregnant person seeing abortion will not be charged with a crime, doctors will be subject to imprisonment for up to 10 years and a fine of up to $100,000, people manufacturing or providing drugs to cause an abortion will be imprisoned for 20 years, and although abortion is allowed to save the life of the pregnant person, that determination does not include mental health issues or threats of self-harm or suicide.

Rep. Steve Carra who introduced the bill said in a statement that House Bill 6270 “will update the 1931 Law to make it enforceable post-Roe v. Wade,” adding that “It takes inspiration from similar legislation passed in the state of Oklahoma.”

In a Glengariff Group, Inc. survey commissioned by the Detroit Regional Chamber in May, nearly 59 percent of voters supported the proposed constitutional amendment while nearly 28 percent did not. Another 12 percent were undecided. When asked if overturning Roe v. Wade would affect voters’ motivation to get to the polls, about 38 percent of voters said they were more motivated to vote — with close to 30 percent “much more” motivated — and less than 2 percent said they were less motivated to vote. About 58 percent said it would not influence their decision to vote.

Whitmer and Nessel are both up for reelection in November.

Looking ahead to key races this fall, NARAL Pro-Choice America, a nonprofit reproductive freedom advocacy organization, along with partners Planned Parenthood Action Fund and Emily’s List, are investing $150 million across the country to back candidates who support abortion rights. “This Election Day, we’ll send a message to the anti-choice lawmakers responsible for this crisis: when you come for our rights, we come for your seats,” said Mini Timmaraju, president of NARAL Pro-Choice America.

Rising Voices, a Michigan nonprofit organization that seeks to organize and develop the leadership of Asian American women and young people, is also a part of the coalition of organizations supporting the Reproductive Freedom for All ballot initiative efforts. They seek to protect vulnerable Asian Americans and other communities of color who face particular challenges such as limited access to reproductive health due to language barriers, finances, cultural restrictions, lack of sex education, and fear of punishment and deportation.

“People think that that work is just about votes or elections and they’re like, ‘Oh, we’re not political people,’” said Jungsoo Ahn, interim executive director of Rising Voices. “But it’s not whether you’re political or not. It’s the fact that we’re at a time where harm is too likely to come upon our communities. So if we do not act, then all that harm will act upon us. Many people are talking about these elections as harm prevention elections, especially in Michigan.”