INDIANAPOLIS — After several quiet years, tornadoes have erupted in the United States over the last two weeks as a volatile mix of warm, moist air from the Southeast and persistent cold from the Rockies clashed and stalled over the Midwest.

“We’re getting big counts on a lot of these days and that is certainly unusual,” Marsh said.

READ MORE: How to help tornado victims in Oklahoma, Ohio and other parts of the Midwest

The National Weather Service had already received at least 27 more reports of tornadoes Tuesday, suggesting that the record for consecutive days would be broken once the official totals are in.

The weather service has received 934 tornado reports so far this year, up from the yearly average of 743 observed tornadoes. More than 500 of those reports came in the last 30 days. The actual number is likely lower, however, because some of the reports probably come from different witnesses who spot the same twister.

The U.S. has experienced a lull in the number of tornadoes since 2012, with tornado counts tracking at or below average each year and meteorologists still working to figure out why.

“A lot of people are trying to answer that, but there’s no definitive answer,” Marsh said. 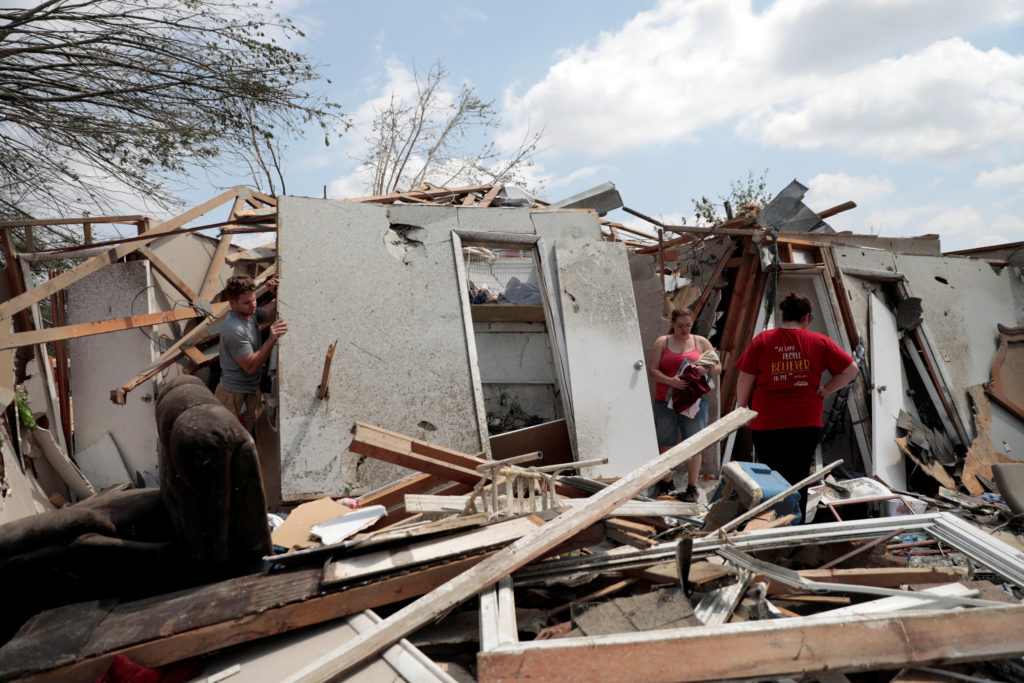 Joseph Taulbee, 21, Allyson Smith, 25, and Danielle,Taulbee, 24, work to collect memorabilia from their grandmother’s damaged house after a tornado touched down overnight in Brookville, near Dayton, Ohio. Photo by Kyle Grillot/Reuters

The recent surge in tornado activity over the past two weeks was driven by high pressure over the Southeast and an unusually cold trough over the Rockies that forced warm, moist air into the central U.S., sparking repeated severe thunderstorms and periodic tornadoes.

“Neither one of these large systems —the high over the Southeast or the trough over the Rockies— are showing signs of moving,” Marsh said. “It’s a little unusual for them to be so entrenched this late in the season.”

Those conditions are ripe for the kind of tornadoes that have swept across the Midwest in the last two weeks, said Cathy Zapotocny, a meteorologist for the weather service in Valley, Nebraska. Zapotocny said the unstable atmosphere helped fuel many of the severe winter storms and subsequent flooding that ravaged Nebraska, Iowa and Missouri earlier this year.

“We’ve been stuck in this pattern since February,” she said.

Zapotocny said the number of tornadoes this year was “basically normal” until the surge this week. May is typically the month with the highest incidence of tornadoes, usually in the Plains and Midwestern states collectively known as Tornado Alley, where most of this year’s twisters have hit.

Most of the confirmed tornadoes were rated as less-intense EF0, EF1 and EF2s on the Enhanced Fujita Scale. But 23 were classified as EF3 tornadoes, with wind speeds of 136-165 mph. The strongest confirmed tornado this year was the EF4 tornado that killed 23 people in Alabama in March.

So far this year, 38 people have died in 10 tornadoes in the United States, including a combined seven within the last week in Iowa, Missouri, Oklahoma and Ohio.

The relative quiet in recent years followed the massive tornado that killed 161 people and injured more than 1,100 in Joplin, Missouri, in 2011. The EF5 storm packed winds in excess of 200 mph and was on the ground for more than 22 miles.

Scientists also say climate change is responsible for more intense and more frequent extreme weather such as storms, droughts, floods and fires, but without extensive study they cannot directly link a single weather event to the changing climate.

Monday’s outbreak was unusual because it occurred over a particularly wide geographic area. Eight states were affected by two regional outbreaks, in the high Plains and the Ohio River Valley.

Left: A tornado is seen in Eudora, Kansas, in this still from a video taken May 28, 2019 obtained from social media. Image by Kim Scott via Reuters