NEW YORK — As warmer weather tempted New Yorkers to come out of quarantine, police dispatched 1,000 officers this weekend to enforce social distancing and a ban on congregating in public spaces.

Officers set out on foot, bicycles and cars to break up crowds and remind those enjoying the weather of public health restrictions requiring they keep 6 feet away from others.

The New York City Police Department has made 60 arrests and issued 343 summonses related to social distancing since March 16.

Police Commissioner Dermot Shea issued a stern warning after a series of clashes this week between police officers and members of Orthodox Jewish communities over social distancing.

“We will not tolerate it,” Shea said after community members flooded the streets for funeral processions. “You are putting my cops’ lives at risk and it’s unacceptable.” 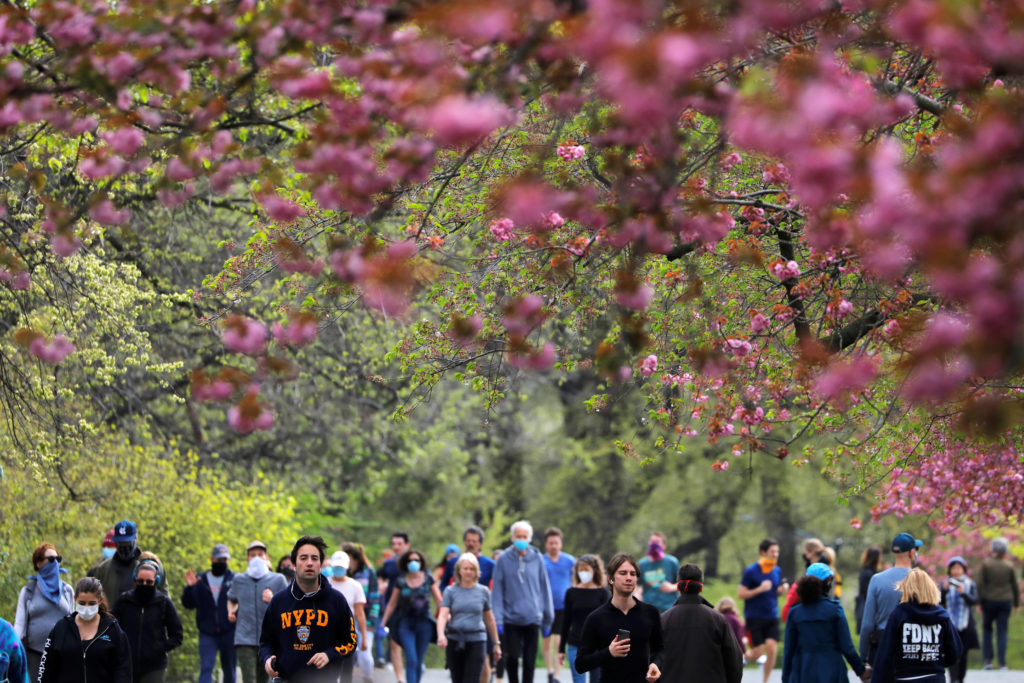 People are seen beneath blossoming trees in Central Park during the outbreak of the coronavirus disease (COVID-19) in Manhattan, New York City, New York, U.S., April 19, 2020. Photo by Photo by Andrew Kelly/Reuters.

Enforcement has its limitations when it comes to social distancing, police concede, leaving it up to New Yorkers to play by the rules to help keep infections on the downturn.

Most people are heeding officers’ warnings to keep their distance in parks and around essential businesses like grocery stores, Shea said.

But a stark example of non-compliance came Thursday when officers interrupted a crowded funeral procession in Brooklyn’s Borough Park neighborhood. Video posted to social media showed officers in protective masks chasing a minivan and shouting at dozens of people marching behind the van to get out of the street and onto the sidewalk.

On April 18, officers passed out summonses and made arrests at a Bronx parking lot and garage where they found a makeshift nightclub featuring a pool table and bar offering hard liquor and Corona beer, and at a closed Brooklyn barbershop where more than 50 people gathered for a party featuring loud music and gambling.

Two days later officers broke up a “4/20” marijuana holiday celebration staged in the vacant third floor of a building in Manhattan’s Chelsea neighborhood. Dozens of people, some drawn by social media hype about the party, were given summonses for trespassing.

Left: A worker places information as he closes a street to be used by pedestrians for ensuring that social distancing norms are maintained, during the outbreak of the coronavirus disease (COVID-19) in the Manhattan borough of New York City, U.S., May 2, 2020. Photo by Eduardo Munoz/Reuters.