Classes resume at Texas school for first time since shooting

SANTA FE, Texas — Students returning to class Tuesday at a Texas high school where 10 people were killed less than two weeks ago were greeted by an increased police presence and supporters holding signs saying “Santa Fe Strong” and “United We Stand.”

Tuesday marked the first day of class at Santa Fe High School since the mass shooting that left eight students and two substitute teachers dead. Students who had classes in the area of the May 18 shooting were first allowed to enter at about 8 a.m., followed by the rest of the student body about two hours later.

A two-hour assembly honoring the victims was planned for Tuesday, and counselors will be available to students, Santa Fe High School Principal Rachel Blundell said in a letter to parents.

Hailey Hubbard, 17, a senior at Santa Fe High School, was one of the many students who went back for her final week of school.

“Honestly, I just want to go back so I can see my friends and not spend my last three days of senior year just being secluded in a room and have that last memory (of senior year) being (the shooting), because that would honestly suck,” Hubbard said near her home before going to school. 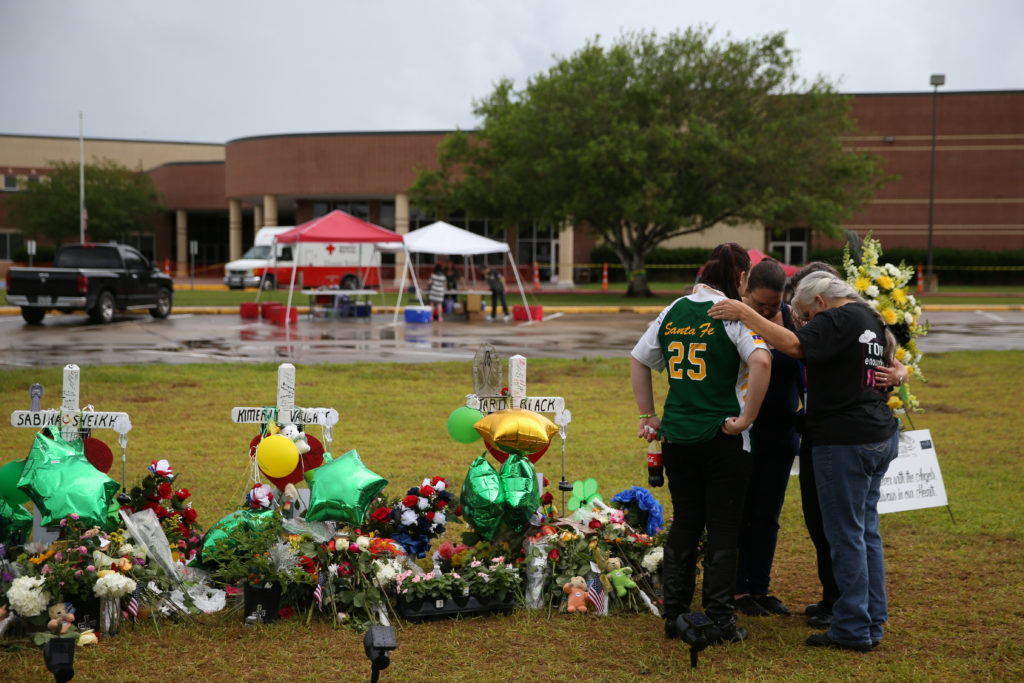 People mourn at a makeshift memorial left in memory of the victims killed in a shooting at Santa Fe High School in Santa Fe, Texas. Photo by Loren Elliott/Reuters

Hubbard said some of her friends are more ambivalent about returning to campus and that she spent part of her morning on Tuesday calming one friend down. She said he had a panic attack at the thought of going back to school.

Hubbard said she hopes returning to campus will also give her mother peace of mind because “she’s terrified of me going to school.”

Students lined up Thursday in front of the school’s main entrance, which was the only approved entrance into the school, and more than 20 law enforcement vehicles were parked near the school. Students were not allowed to carry backpacks and large purses into the building and were required to show a school ID or some form of identification before entering.

Authorities have charged student Dimitrios Pagourtzis with capital murder in the attack. Investigators said Pagourtzis used a shotgun and pistol that belonged to his father.

Left: Crosses bearing the names of the victims killed in a shooting at Santa Fe High School are seen in Santa Fe, Texas. Photo by Jonathan Bachman/Reuters