NEW YORK (AP) — The national holiday to mark America’s birth as a country will be filled with parades, concerts, competitive eating and of course, fireworks.

But Independence Day won’t be free from politics, as President Donald Trump’s plan for a celebration in Washington featuring a display of tanks, fighter jets and a stealth bomber is garnering support from some and protests from others.

Highlights from celebrations around the country:

The Macy’s fireworks show over the East River in New York City is said to be one of the biggest in the country. The fireworks spectacle, plus concert, is broadcast on NBC. Country powerhouses Luke Bryan, Maren Morris and Brad Paisley will perform. Jennifer Hudson, Ciara, Khalid and Derek Hough are also performing.

How many hot dogs will be the question of the day at the annual Nathan’s Famous July Fourth hot dog eating contest on New York’s Coney Island boardwalk.

Boston is marking Independence Day with a traditional procession, speeches, a Boston Pops concert and fireworks. 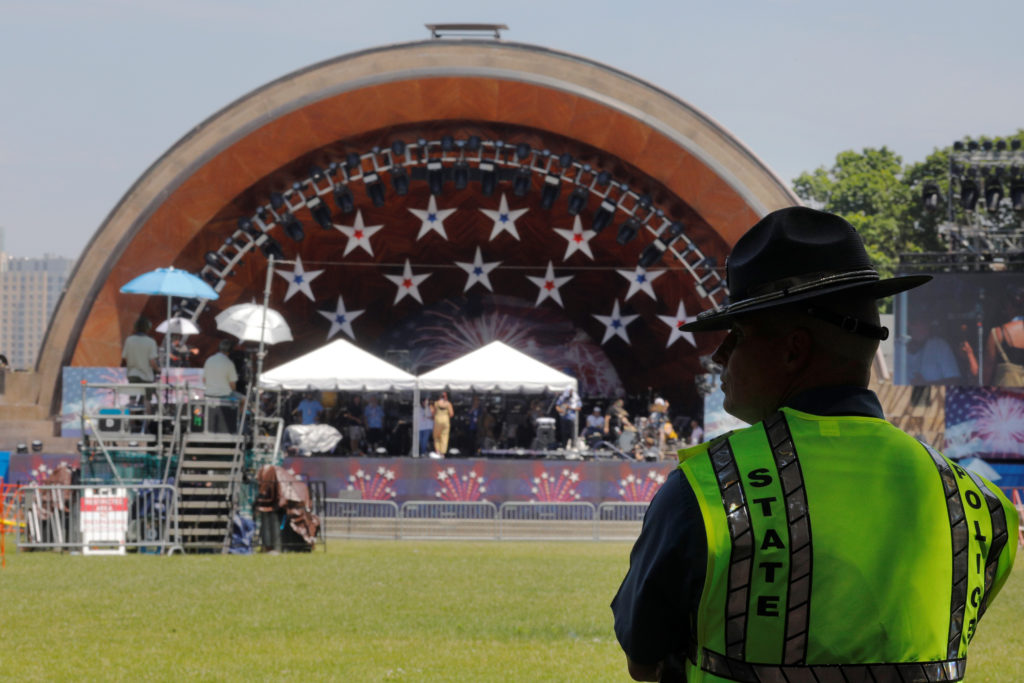 A Massachusetts State Police trooper stands at the Hatch Shell ahead of Fourth of July festivities in Boston, Massachusetts, on July 3, 2018. Photo by Brian Snyder/Reuters

Festivities begin Thursday morning at City Hall with a brief speaking program. Marchers will then set off for the Old Granary Burial Ground where Samuel Adams, John Hancock and other prominent colonial leaders are buried.

They’ll also make a stop at the Old State House, where the Declaration of Independence will be read out from a balcony by a member of the Ancient and Honorable Artillery Company — just as it was in 1776.

The procession ends at Faneuil Hall where Boston University Dean of Students Kenneth Elmore will deliver a speech in a tradition dating to 1773.

The Boston Pops orchestra performs at night with fireworks over the Charles River as a backdrop.

The nation’s oldest continuous Fourth of July celebration takes place in Bristol, Rhode Island. The events begin on Flag Day and culminate with a parade on July Fourth that typically draws 100,000 people. Organizers say they’re preparing for the hot weather and a festive celebration of the nation’s independence. The annual celebration began in the seaside town in 1785.

PBS will broadcast the concert from the West Lawn of the Capitol featuring host John Stamos and such performers as Carole King, Vanessa Williams, Colbie Caillat, Lee Brice and the O’Jays.

Cameras set up around the nation’s capital will capture the fireworks display. 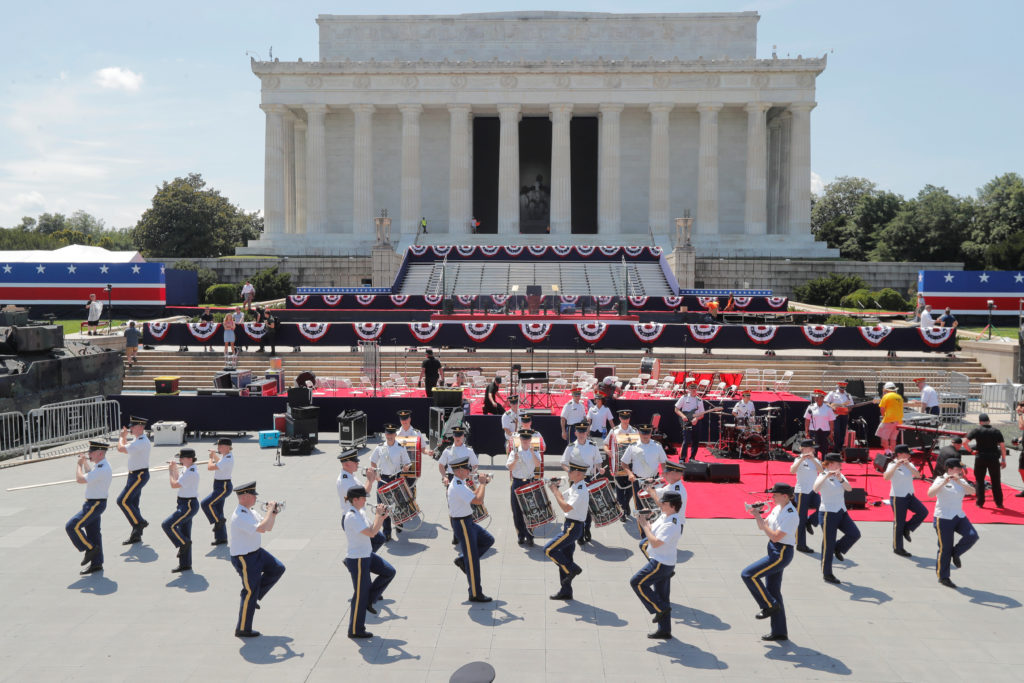 Members of a U.S. military band rehearse as preparations continue for U.S. President Donald Trump’s Fourth of July speech at the Lincoln Memorial in Washington, on July 3, 2019. Photo by Jim Bourg/Reuters

Fox News Channel and C-SPAN have both announced plans to televise the president’s speech.

Florida: For the kids and kids at heart

At Legoland in Winter Haven, Florida, children can help create a giant United States flag out of LEGO bricks on July 4 as part of the Red, White and Boom celebration. Once the sun goes down, special viewing glasses will allow guests to watch “a gazillion bricks explode from the sky” above Lake Eloise during the theme park’s largest fireworks display of the year.

In Orlando, Walt Disney World is hosting a special show called Celebrate America! A Fourth of July Concert in the Sky on Thursday night.

In Philadelphia, the celebrations begin with a parade near Independence Hall and culminate with a concert featuring Meghan Trainor and Jennifer Hudson on the Benjamin Franklin Parkway. The annual fireworks show blasts off after the concert around the Philadelphia Museum of Art.

Connecticut: A different kind of boom

More than 5,000 people were expected for Willimantic’s annual Boom Box Parade in Connecticut. In what’s become an offbeat tradition, participants and spectators will carry radios all tuned to the same local station, which will provide traditional marching music.

The parade dates to 1986, when the town couldn’t find a marching band for its annual Memorial Day parade. Organizers approached radio station WILI-AM for help. Station officials said it was too late to organize and publicize an event for that holiday, but began planning for July Fourth, and the tradition was born.

South Carolina: Salute from the shore

South Carolina celebrates Independence Day in the U.S. by having military planes fly over the state’s beaches.

Jets and a cargo plane take about 40 minutes to fly southwest along the nearly 200 mile (322 kilometer) coastline in what is called the Salute from the Shore.

Beachgoers wear red, white and blue and wave giant American flags as the plans make their 30 minute journey down the coast.

Early Thursday, firefighters in South Carolina had to dodge exploding rockets to douse a spectacular fire that destroyed at least two containers of fireworks stored for sale on the Fourth of July.

The blaze provided for an impressive, though sparsely attended show as shells and rockets burst through the metal containers, sending colorful showers into the air above the Davey Jones Fireworks and the House of Fireworks stores in Fort Mill.

Around the country, more than two dozen naturalization ceremonies will be held to welcome in the newest Americans in places like the Liberty Bell Center in Philadelphia and George Washington’s home in Mount Vernon, Virginia.

One hundred and fifty immigrants from 54 countries will be sworn in as new U.S. citizens in a special naturalization ceremony Thursday at Old Sturbridge Village, an outdoor history museum where costumed actors depict 19th-century New England life.

More new citizens will take the oath of allegiance aboard the U.S.S. Constitution in Boston.

Left: People watch fireworks over the Del Mar fair in celebration of the 241st anniversary of the Declaration of Independence, in Del Mar, California, on July 4, 2017. Photo by Mike Blake/Reuters