Hurricane Michael’s destruction, by the numbers

MIAMI — Tropical Storm Michael has sped off toward the Atlantic Ocean, but there will be nothing quick about Florida’s recovery from the hurricane, where rows upon rows of homes have been smashed to pieces. The storm also has brought flash flooding to hurricane-weary parts of the Carolinas and Virginia. 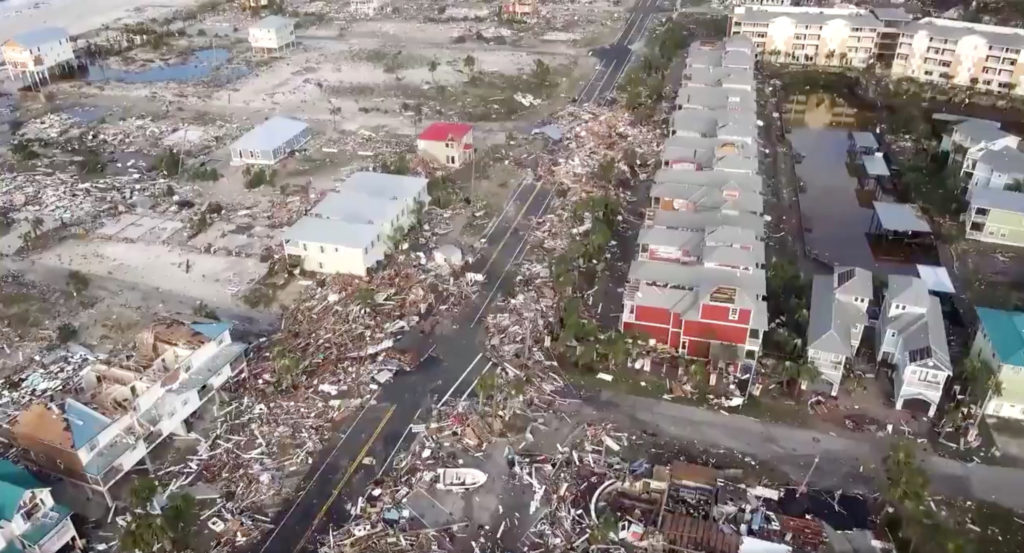 One of the hardest-hit spots in Florida is Mexico Beach , where Michael crashed ashore. In a beach town home about 1,200 people, entire blocks of homes have been reduced to nothing but concrete slabs in the sand or piles of splintered lumber.

Michael left North Carolina behind with rivers rising and more than 530,000 households in the dark. The power outages were concentrated in central North Carolina’s Piedmont region, where motorists had to be rescued Thursday from cars trapped by high water. Flashing flooding also was reported in the big North Carolina cities of Charlotte and Raleigh. Similar scenes played out in parts of Virginia as the storm raced seaward.

The largest hospitals in Panama City shut down and evacuated hundreds of patients due to heavy hurricane damage. Bay Medical Sacred Heart was moving about 200 patients from buildings with blown-out windows, a cracked exterior wall and a collapsed roof. State officials say Florida’s largest psychiatric hospital has been “entirely cut off.” Florida State Hospital in Chattahoochee has been running on emergency generators. A helicopter dropped water and food at the facility on Thursday after a tree downed during the storm caused a water line to break.

The commander of Tyndall Air Force Base says the “base took a beating” from Hurricane Michael and will require “extensive cleanup and repairs.” Col. Brian Laidlaw told the 3,600 airmen stationed at the base just east of Panama City that he won’t ask them or their families to return until their safety is guaranteed.

U.S. Federal Emergency Management Administrator Brock Long warned residents of the hardest hit area not to go back yet. He says it’s still too dangerous in Bay County, Florida, where the hurricane made landfall.

The Environmental Protection Agency says there were no reports of oil spills or other hazardous materials, as occurred during Hurricane Harvey last year in Houston and Hurricane Florence last month in the Carolinas. But boil water advisories are in effect in about eight locations impacted by Hurricane Michael.

‘SHE LIT UP EVERYTHING’

The parents of an 11-year-old Georgia girl who was killed after being hit in the head by a portable structure that crashed into her grandparents’ home say Sarah Radney “lit up everything.” Roy and Amber Rodney said their daughter loved to perform. The sixth-grader recently was in a school play and started playing trumpet in her school band.

Broadcast news organizations faced challenges in getting reporters to Mexico Beach, the city hardest hit by the hurricane. Roads were impassable and some reporters had been pulled out of the town in advance of the storm because of safety fears.

Michael isn’t alone. The National Hurricane Center says Hurricane Leslie and Tropical Storm Nadine are no threat to land over the open Atlantic Ocean, but Tropical Storm Sergio in the Pacific is blowing toward Mexico’s Baja California Peninsula.

Left: Rubble left in the aftermath of Hurricane Michael is pictured in Mexico Beach, Florida. Photo by Jonathan Bachman/Reuters