Thousands to walk off job to protest racial inequality

NEW YORK (AP) — Organizers of a national workers strike say tens of thousands are set to walk off the job Monday in more than two dozen U.S. cities to protest systemic racism and economic inequality that has only worsened during the coronavirus pandemic.

Dubbed the “Strike for Black Lives,” labor unions, along with social and racial justice organizations from New York City to Los Angeles, will participate in a range of planned actions. Where work stoppages are not possible for a full day, participants will either picket during a lunch break or observe moments of silence to honor Black lives lost to police violence, organizers said.

“We are … building a country where Black lives matter in every aspect of society — including in the workplace,” said Ash-Lee Henderson, an organizer with the Movement for Black Lives, a coalition of over 150 organizations that make up the Black Lives Matter movement.

“The Strike for Black Lives is a moment of reckoning for corporations that have long ignored the concerns of their Black workforce and denied them better working conditions, living wages and healthcare,” said Henderson, who is also co-executive director of the Tennessee-based Highlander Research and Education Center.

Among the strikers will be essential workers: nursing home employees, janitors and delivery men and women. Fast food, ride-share and airport workers are also expected to take part in planned events.

MORE: Remembering the life and legacy of John Lewis

The strike continues an ongoing global reckoning on race and police brutality set off by the death of George Floyd, a Black man who died at the hands of Minneapolis police in late May. At noon in each U.S. time zone on Monday, workers are expected to take a knee for about eight minutes — the amount of time prosecutors say a white police officer held his knee on Floyd’s neck.

Strikers are demanding sweeping action by corporations and government to confront systemic racism and economic inequality that limits mobility and career advancement for many Black and Hispanic workers, who make up a disproportionate number of those earning less than a living wage.

Specifically, they are calling on corporate leaders and elected government officials to use executive and legislative power to guarantee people of all races can thrive. That demand includes raising wages and allowing workers to unionize to negotiate better health care, sick leave and child care support. 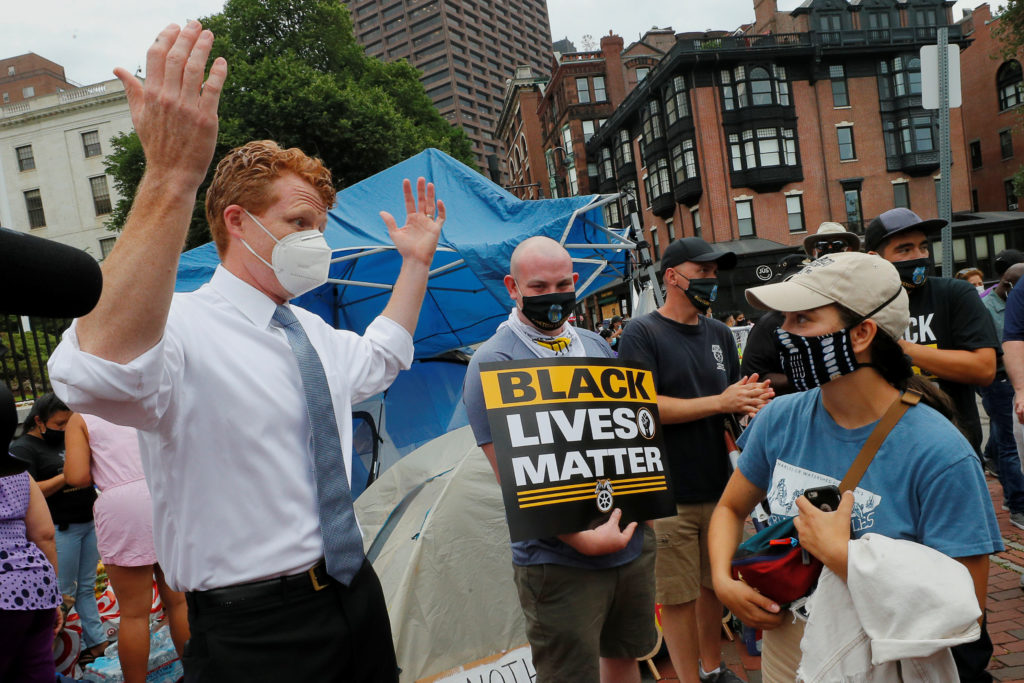 U.S. Representative Joe Kennedy III (D-MA), who is challenging for the seat held by U.S. Senator Ed Markey (D-MA), talks to workers at a nationwide Strike for Black Lives, protesting against racial inequality in the aftermath of the death in Minneapolis police custody of George Floyd, in Boston, Massachusetts, U.S., July 20, 2020. REUTERS/Brian Snyder

When the strike was announced on July 8, partnering unions included the Service Employees International Union, the International Brotherhood of Teamsters, the American Federation of Teachers, United Farm Workers and the Fight for $15 and a Union. Several more worker collectives have since joined, along with social and racial justice groups.

In Manhattan, essential workers will gather outside of the Trump International Hotel to demand the Senate and President Donald Trump pass and sign the HEROES Act. The House-passed legislation provides protective equipment, essential pay and extended unemployment benefits to workers who have not had the option of working from home during the coronavirus pandemic. Organizers said New York Sen. Chuck Schumer is expected to rally with workers.

MORE: How anti-racism is a treatment for the ‘cancer’ of racism

Strikers in Minneapolis, where Floyd was killed on May 25, will include nursing home and airport workers demanding a $15-per-hour minimum wage, organizers said. In Missouri, participants will rally at McDonald’s locations in St. Louis and Ferguson, a key landmark in the protest movement sparked by the death of Michael Brown, a Black teenager who was killed by police in 2014. The Ferguson strikers will also march to a memorial site located on the spot where Brown was shot and killed.

Organizers said many strikers are taking particular aim at corporations such as Walmart and McDonald’s, which they say should be held accountable for widespread mistreatment and exploitation of hourly workers of color. In the wake of Floyd protests, McDonald’s expressed its support for Black victims of police violence and vigilante attacks.

On Friday, a group of McDonald’s workers filed a federal lawsuit against the corporation in Florida, alleging that managers at a corporate-run store in Lakeland subjected them to a “racially hostile work environment” and also had mistreated Black customers. The workers alleged that after they reported their concerns to corporate leaders, their managers retaliated by slashing their hours and changing their work responsibilities. 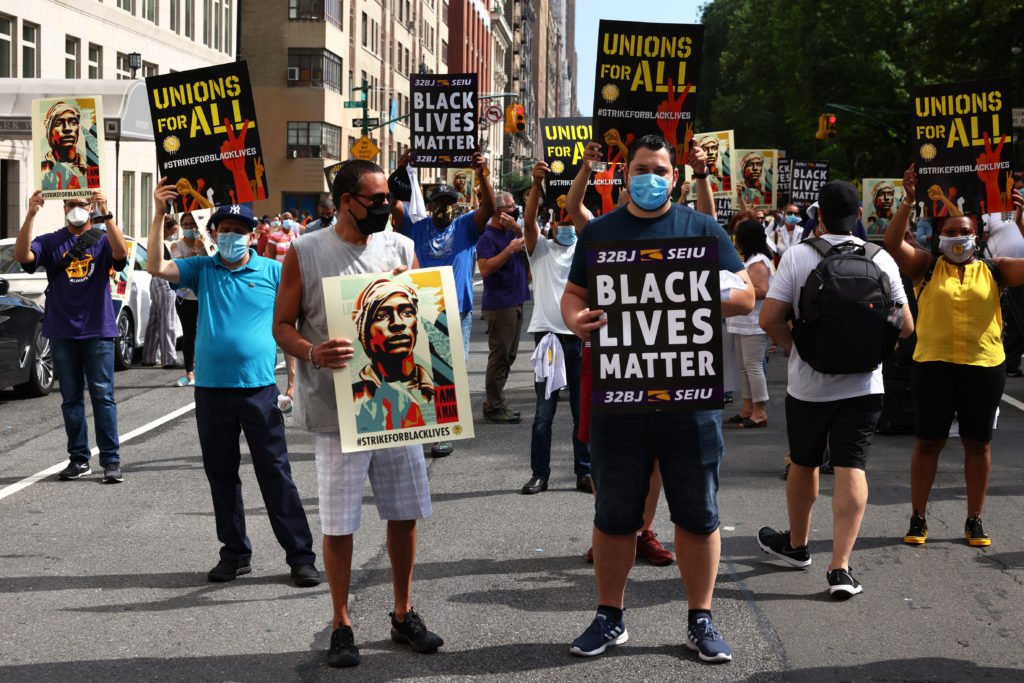 “McDonald’s, if you really believe Black lives matter, it’s time to stop with the lip service and start with real action: treat your Black employees like our lives matter,” said Faith Booker, a Black plaintiff in the lawsuit who also plans to join strikers on Monday.

In a statement emailed to the AP, McDonald’s said it was taking the claims in the lawsuit “seriously.”

“We stand with Black communities across the globe in our commitment to address unacceptable racial injustices and are disappointed that these allegations do not reflect the high standards we hold ourselves accountable to every day across all areas of our business,” the statement reads.

Left: Dubbed the “Strike for Black Lives,” labor unions, along with social and racial justice organizations from New York City to Los Angeles, will participate in a range of planned actions. Photo by REUTERS/Lucy Nicholson.