COLUMBUS, Ohio — A federal judge blocked part of an Ohio law late Thursday that bans the abortion method of dilation and evacuation in most cases, adding to a list of restrictions on the procedure that are or soon could be in legal limbo.

Senior U.S. District Judge Michael Barrett in Cincinnati ordered the state not to bring criminal charges against doctors who perform the D&E procedure until the case can be fully litigated. Other parts of the law were allowed to proceed.

The ruling comes as the state’s ban of abortions in cases involving a Down Syndrome diagnosis also is before the courts, and the ACLU plans a court challenge to a heartbeat abortion ban signed last week.

The ban on D&Es, the most common second-trimester abortion procedure, was signed by then-Gov. John Kasich (KAY’-sihk) last year. In Thursday’s ruling, Barrett agreed with Planned Parenthood the law is likely to be declared unconstitutional because it places an undue burden on a “large fraction” of Ohio women.

Dr. Leana Wen, president of the Planned Parenthood Federation of America, called the ruling a victory for patients’ rights. 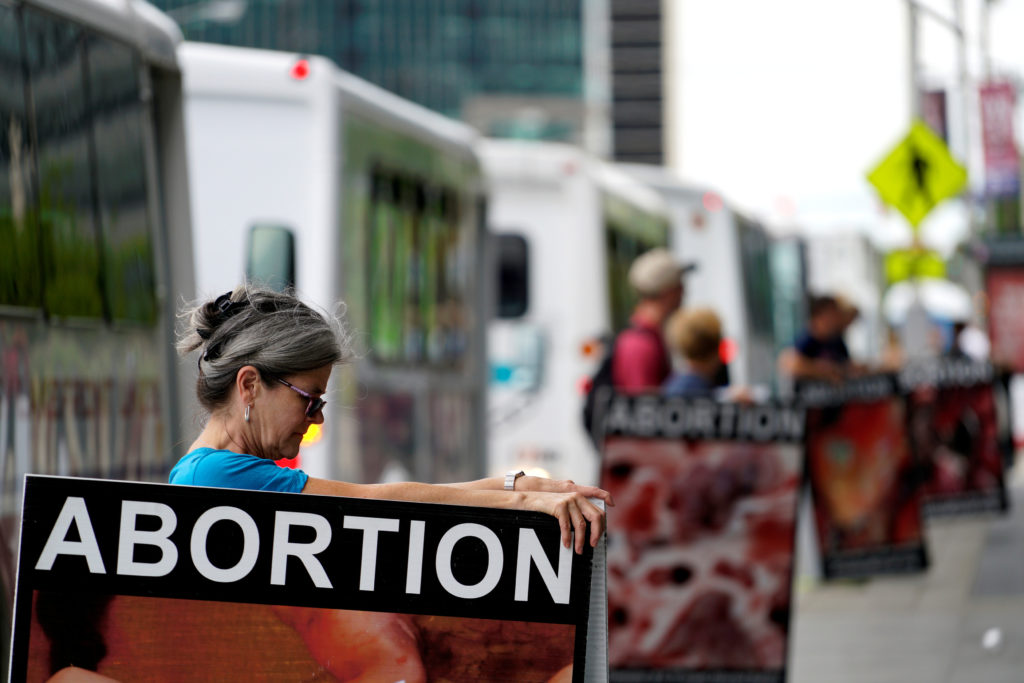 Anti-abortion protestors holding what they said were photos of abortions stand outside the building where new organizations are working at the Republican Presidential Convention in Cleveland July 14, 2016. Photo by REUTERS/Rick Wilking

The Ohio law defines D&E as “dismemberment abortion” of a living fetus. Barrett agreed with the plaintiffs that such language creates an “implicit fetal demise” requirement in the law — forcing doctors who perform the procedure to either end the life of a living fetus before conducting the abortion — which can be dangerous, ineffective or both — or not offering the D&E abortion at all.

“D&E is the only pre-viability second trimester abortion method available in the outpatient setting in Ohio,” Barrett wrote. “Without the option of selecting a different method, or the ability to rely on a sufficiently broad medical exception, physicians who perform D&E are presented with a series of (fetal) demise options that layer risks on top of existing risks” — legally for doctors, and physically for their patients.

The state argued those risks are mitigated by an exception written into the law for the life of the mother or “serious risk” to her health.

Barrett rejected that argument, writing, “the medical exception is narrowly drafted at best, and unconstitutionally vague at worst.”

He said graphic and unsettling descriptions of abortion procedures were necessary to include in his ruling, because preventing fetal pain is at the heart of efforts to restrict the procedure. Barrett said the general consensus of the medical community is that a fetus cannot feel pain before about 24 weeks’ gestation, when neural connections to the cortex develop.

Still, he said the state of Ohio’s interest in the case is legitimate.

“(T)he Court finds it unlikely that pre-viability fetuses feel pain,” he wrote. “The Court recognizes, however, the State’s interest in this area to prevent even the possibility.”

Left: An abortion rights activist holds up a sign as marchers take part in the 46th annual March for Life in Washington, U.S., January 18, 2019. Photo by REUTERS/Joshua Roberts