PARIS (AP) — Specialists shoring up fire-damaged Notre Dame Cathedral returned Monday to the Paris site for the first time in nearly a month, this time wearing disposable underwear and other protective gear after a delay prompted by fears of lead contamination.

Meanwhile, cleanup teams swept, sprayed and vacuumed neighboring streets Monday to scrub away any lead left over from the April blaze that decimated Notre Dame’s roof and toppled its spire. Toxic dust spewed into the air as hundreds of tons of lead melted in the fire.

At the cathedral itself, activity resumed Monday under strict new lead-protection measures for the stonemasons, cleanup workers and scientists working on the monument, according to the Culture Ministry. They include throwaway full-body clothing, obligatory showers and a new decontamination zone to ensure that no one tracks pollution outside the site.

WATCH: The painstaking process of repairing a damaged cathedral

The workers are clearing out hazardous debris and studying and consolidating the medieval monument — a crucial first step to prepare the fragile cathedral for a yearslong, multimillion-euro reconstruction effort.

But even this first step is taking longer than expected because of lead worries.

Some environmental activists and residents say French authorities underplayed the lead poisoning risks in the aftermath of the blaze. 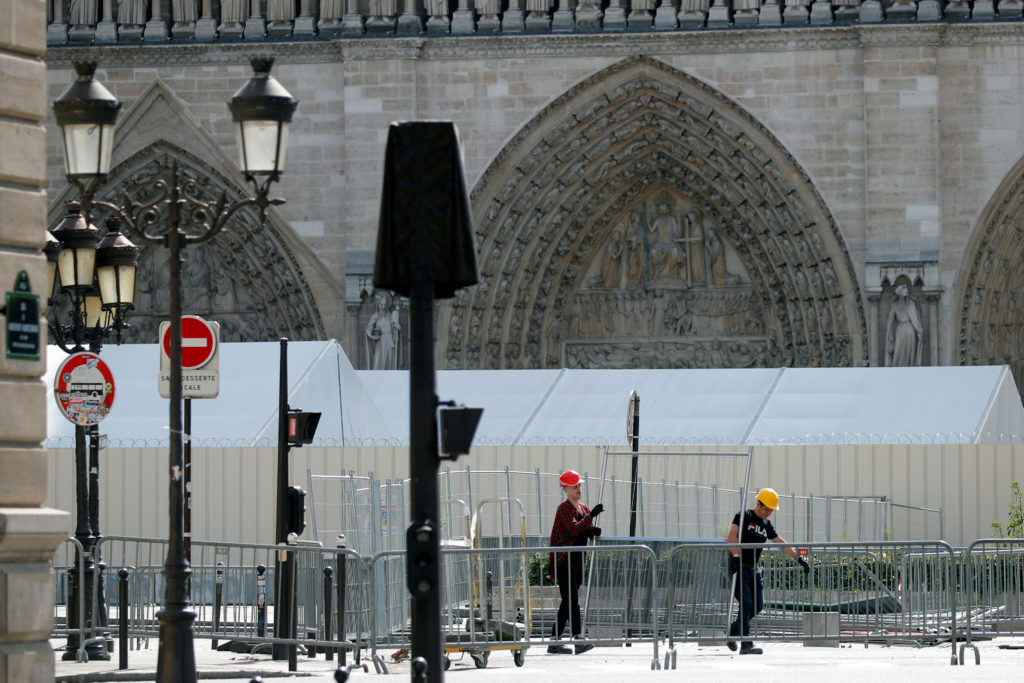 Construction workers set up fences in preparation for lead decontamination operation on streets around Notre-Dame Cathedral in Paris, France on August 13, 2019. Photo by Charles Platiau/Reuters

Other lead-prevention operations are also underway in the area around Notre Dame. Experts are carrying out a deep clean of neighborhood schools and are spraying chemical agents and vacuuming surrounding streets to remove any residual lead.

The regional health authority said last month that the main lead risk was inside the cathedral itself and its forecourt, and that no dangerous lead levels had been registered since the fire in the surrounding streets, where tourists and residents circulate.

Didier Durand, whose stone-working company Pierrenoel has eight employees working on the cathedral, said he’s eager to get back to work.

“Notre Dame hasn’t been saved yet,” he told broadcaster France-Info. “We haven’t stabilized the buttress structure yet … and we’re losing a lot of time.”

The cathedral, its adjacent park and its forecourt have been closed to the public since April 15 and are likely to stay that way for years. French President Emmanuel Macron has said he wanted Notre Dame rebuilt within five years but reconstruction experts doubt that’s possible.

Oleg Cetinic contributed to this report.