WASHINGTON — Weeks of contentious debate came to an end with the bang of House Speaker Nancy Pelosi’s gavel, marking the impeachment of President Donald Trump.

The House vote was the culmination of a nearly three-month probe into whether the Trump administration withheld a White House visit and military aid from Ukraine in exchange for the announcement of investigations into former vice president Joe Biden and his son, Hunter.

For months, many Democrats called for Trump’s impeachment — some before the release of a whistleblower complaint against the president. Trump was charged with two articles of impeachment: abuse of power and obstruction of Congress. In the weeks preceding Wednesday, the outcome felt inevitable.

The morning of the vote, House Democrats projected a message of solemn determination, sad but confident in their decision to support impeachment.

“I feel the weight of history, the gravity of this decision,” said Rep. Karen Bass, D-Calif., who is chair of the Congressional Black Caucus. “It is nothing to cheer about. I am very saddened that it has come to this, but I also am a little fearful. I’m fearful of [Trump’s] erratic behavior and not knowing how he’s actually going to respond to this.”

Ultimately, the long day ended as expected, with a nearly party-line vote to impeach the president.

Rep. Hank Johnson, D-Ga., a member of the House Judiciary Committee who voted to bring articles of impeachment to the floor, called the vote “a significant moment” for him. “I’m sure that as I look back on my own history [I’ll be] proud of the stance that I have taken.”

Republicans said the tenor was somber on their side of the chamber, as members waited for their turn to debate the articles of impeachment.

“People are contemplating what they’re going to say and they realize the importance of the moment,” said Rep. Steve Chabot, R-Ohio, who served as a House manager in the 1999 Senate impeachment trial of President Bill Clinton.

But Chabot said the sense of history in this moment paled in comparison to the Clinton impeachment. “It may just be me, but it seemed like there was a higher level of seriousness, you know, concern, back then then there is now,” Chabot said.

Lawmakers spent eight hours on Wednesday debating the articles of impeachment. What began as a muted exchange between the two parties grew more tense as the reality of the impending vote and hours of debate set in.

Reps. Doug Collins, R-Ga., and Steve Scalise, R-La., each delivered impassioned remarks near the end of the debates that garnered applause and shouts of support from their fellow Republicans.

“It has been said today ‘Where is bravery?’ I’ll tell you where bravery is found and courage is found. It is found in this minority who has lived through the last year of nothing but rules being broken, people being put down, questions not being answered, and this majority saying ‘Be damned with anything else, we’re going to impeach’,” said Collins, ranking member of the House Judiciary Committee, in his closing remarks from the House floor. 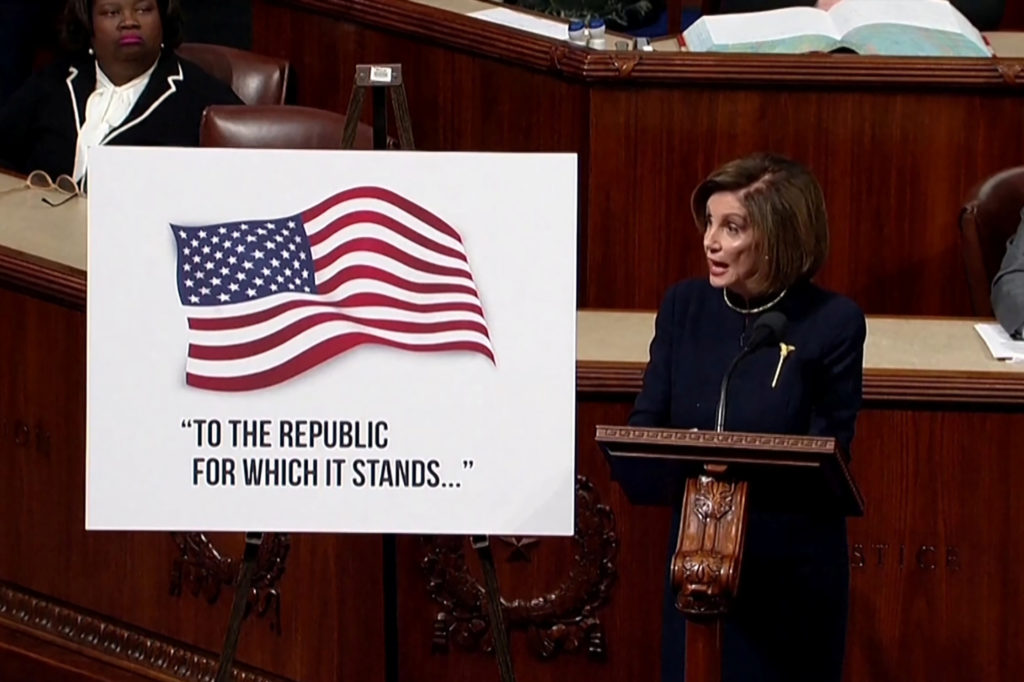 House Speaker Nancy Pelosi (D-CA) speaks ahead of a vote on two articles of impeachment against U.S. President Donald Trump on Capitol Hill in Washington, D.C. Photo via Reuters.

Ultimately, the long day ended as expected, with a nearly party-line vote to impeach the president. Republicans all voted against impeachment. Rep. Tulsi Gabbard, D-Hawaii, who is also a 2020 Democratic presidential hopeful, was the only member to vote “present” for both articles of impeachment after previously wavering on the issue.

Two Democrats — Reps. Collin Peterson of Minnesota and Jeff Van Drew of New Jersey — also voted against impeachment. Van Drew has drawn ire in recent days amid reports that he plans to switch parties and become a Republican. After casting his votes, Van Drew stood by his decision.

“I had voted this way at the beginning of the impeachment process. I’m doing nothing different than I did then,” Van Drew said to reporters. When asked about his current party affiliation, Van Drew said he is “technically” a registered Democrat. Van Drew made a visit to the White House Thursday afternoon to announce that he is joining the Republican party. During the visit, Trump endorsed Van Drew.

Rep. Steve Cohen, D-Tenn., a member of the House Judiciary Committee, dismissed the defections. “Van Drew is not a Democrat. I think that might have been part of his price that he’s paying for whatever he’s getting from Trump. But he’s going to switch parties. … He’s not a Democrat.”

The impeachment inquiry was sparked by a whistleblower complaint expressing concern over a July 25 phone call between Trump and Ukrainian President Volodymyr Zelensky, during which Trump asked for a “favor” to look into debunked corruption allegations against former Vice President Joe Biden and his son Hunter Biden.

After news of the phone call broke in September, a House inquiry soon followed. Weeks of closed-door and public testimony from current and former diplomats and foreign affairs officials — a number with first-hand knowledge –provided more information about White House efforts to pressure Ukraine to announce investigations into Trump’s political rival.

As details about the administration’s relationship with Ukraine emerged, Democratic and Republican lawmakers were cast on opposite sides of a bitter battle. Democrats say the president violated his oath of office by asking a foreign government to interfere in the 2020 presidential election.

Republicans, on the other hand, have offered a united and passionate defense of Trump’s actions. Their argument: Democrats are waging an unfounded partisan war against the president that began the moment he won the 2016 election.

Trump has doubled-down on his assertion that he did nothing wrong. In a six-page letter to House Speaker Nancy Pelosi on Tuesday, the president said: “After three years of unfair and unwarranted investigations, 45 million dollars spend, 18 angry Democrat prosecutors, the entire force of the FBI, headed by leadership now proven to be totally incompetent and corrupt, you have found NOTHING!” He reiterated his stance during a rally in Michigan on Wednesday night happening as the House voted to impeach him.

For Republicans on Wednesday, much of the fiery condemnation that has consumed the impeachment inquiry shifted to more measured criticism from many lawmakers. 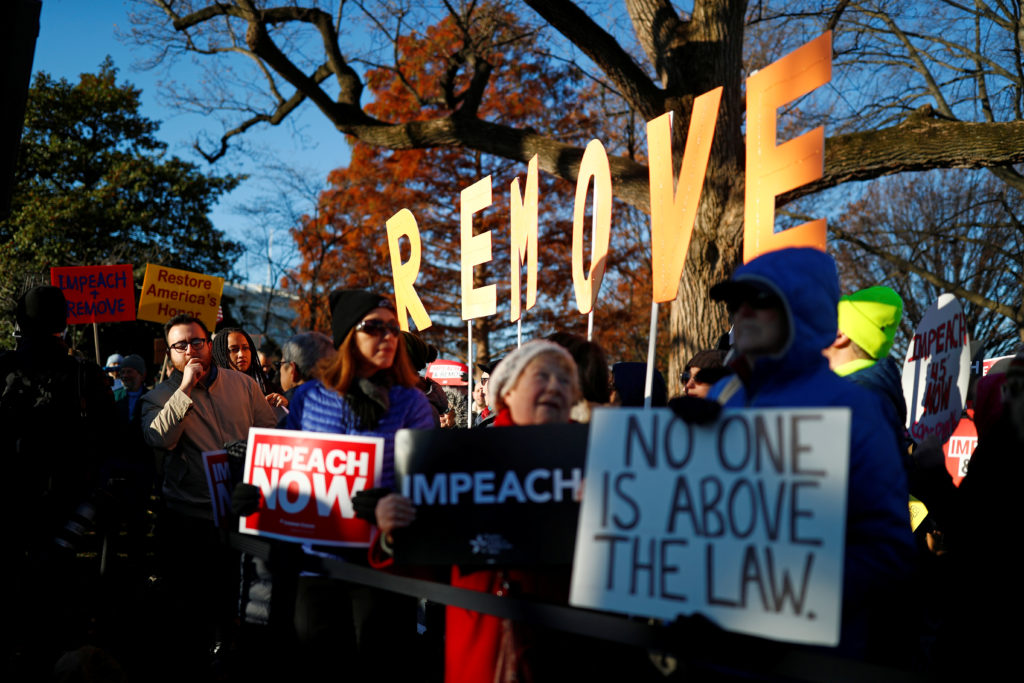 Activists rally in support of the impeachment and removal of U.S. President Donald Trump on Capitol Hill in Washington, D.C. on Dec. 18, 2019. Photo by Tom Brenner/Reuters.

On Thursday, Meadows said he would retire and not run for reelection. He is believed to be eyeing a role in the White House.

Rep. Frank Lucas, R-Okla., who has been in Congress since 1994, said Trump’s impeachment inquiry was more divisive than Clinton’s with ramped up political partisanship and “a good measure of theatrics on all sides.”

With Trump now impeached, the Senate is charged with holding a trial to consider his removal from office. Pelosi said in a news conference late Wednesday that she might temporarily withhold the articles from the Senate to ensure the case gets a fair trial. Senate Republicans are expected to push for a speedy process. In an interview with CNN last week, GOP South Carolina Sen. Lindsey Graham said he anticipates the issue will “die quickly” in the Senate.

Republican senators, holding the majority, will almost certainly vote to acquit Trump. What comes after the trial is uncertain for both parties. Americans are divided almost equally over impeachment. Trump’s impeachment will cement an infamous place in history, but it may also damage his prospects for reelection in 2020.

There’s a possibility, however, it could bolster his base and secure a victory. “I think people are taking up defense of the president,” Rep. Meadows said. “I know a number of people that really are more passionate about showing up to vote because of where this whole impeachment process started and where it’s finishing.”

In 2020, Democrats will have to defend 31 districts that voted for Donald Trump in 2016. Most Democratic lawmakers understand the political risks, and voted for impeachment anyway. Rep. Donna Shalala, a freshman Democrat who won a Florida seat previously held by a Republican, told PBS NewsHour on Wednesday that Democrats are up to the challenge in 2020.

“We intend to beat him,” said Shalala. “But we’re going to beat him on substantive issues. … I’m not worried. The only thing I worry about is doing the right thing.”